To Start at the Beginning


Though it might be exciting to rush to the research punch line and find out just who those current distant cousins might be, after sliding down the generations of descent, I'm never in so much of a rush that I can't take a moment to savor the times and places those ancestors once moved through. So, before I can jump to answer that question percolating in my mind yesterday, we need to take a look at a specific family line.

The beginning of the line I mentioned yesterday started when my sixth great grandmother married a man called Thomas Lewis. Don't let that fairly common surname fool you; it belongs to a line of Virginia men of noted accomplishments.

The Lewis family seemed to start out like many of those fabled beginnings: "There were three brothers..." The start of the Lewis family story, however, began in France—one suspects that would render the surname Louis—where these three Huguenot brothers decided, after the Edict of Nantes was revoked, to seek safety in the British Isles. The progenitor of my branch of the Lewis line headed for northern Ireland.

If some of the old genealogies I've found digitized online can be trusted, Thomas Lewis was descendant of one of those three brothers—apparently a great grandson. His father, John Lewis, chose to leave Ireland with his family in the 1730s and was considered a pioneer settler of Augusta County, Virginia.

Despite any image you might conjure in your mind about pioneers in the early American colonies, life must not have been too rugged for Thomas Lewis. Unlike his brothers, he was not involved in military pursuits as a young man—an outcome attributed to his poor eyesight by John Lewis Peyton's 1882 History of Augusta County, Virginia. Instead, he was considered "a man of much learning and ability" who served as representative in the House of Burgesses. His library was "one of the most extensive and well selected in the colony."

Among other episodes in his life, Thomas was also a surveyor, serving at one point with the father of Thomas Jefferson. It's likely no surprise to learn that Thomas Lewis eventually became one of the largest landholders in nearby Rockingham County, and at one point was host to George Washington.

It was from this marriage of Thomas Lewis to my sixth great grandmother, Jane Strother, that both my direct line ancestor—their daughter Elizabeth—and her older sister Agatha were born.

As was often common in that era, Agatha found herself a widow at a young age, losing her husband when their daughter was barely three years of age. It was that particular daughter who became the ancestor of the distant cousin whose surname prompted me to wonder if he, too, had been involved in politics.

But before we jump to that story, let's examine just what it was that caused Agatha's husband's early death in 1774—yet somehow also resulted in his designation as a Revolutionary War Patriot. 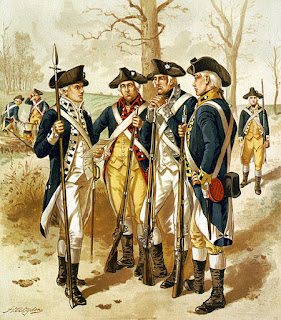