It was barely a month ago when I was writing about plans for our family's upcoming trip east to visit relatives in Illinois and Ohio—and, of course, to do some needed genealogical research along the way. Among other quests—DNA testing, for one thing—I had hoped to wrap up the documentation to submit a supplemental D.A.R. application on behalf of my daughter, which would handily also become the paperwork for membership for my two sisters-in-law as well as, possibly, some cousins.

It looks like that paper chase will have to be accomplished the old fashioned, snail-mailed way now. Late last night, our flight home touched down at the airport without us; though our route on the ground was planned to take us from Chicago to Columbus and back again, we've been sitting here at home all the past two weeks we were supposed to be in the air and on the road.

Of course, we'll get back to the drawing board and reconfigure our itinerary, hopefully getting the chance to make the journey sometime this fall. And there were real roadblocks checking our progress this month: health problems that would not have accommodated the kind of pleasant visits with relatives that we had had in mind.

In the meantime, progress on my research goals have not entirely been thwarted. There is, of course, another option. Though it may take a few phone calls and possibly incur some expenses, there is always the alternative that has been the tried and true methodology for genealogical research for decades prior to the advent of the Internet. Yes, snail mail.

As has often been repeated by many in the research world, contrary to popular opinion, not everything we seek in our genealogical pursuits can be found online. Yes, digitized records are being uploaded online at a breathtaking pace. Kudos to those organizations who have facilitated that effort. But not everything is there, ready to be accessed at the click of a mouse. Sometimes we have to go hunting, ourselves, through those library stacks, archives, museum collections or even out in the "wilds" of long-forsaken cemeteries.

The particular line of descent I'm trying to verify has a few missing links along the way. The difficulties of dealing with family matters from the early 1800s, coupled with the challenge of identifying one of those "invisible" females—the married type who died young in childbirth, for instance—signals the type of project in which a researcher simply has to go out there and get her hands on some source documents.

Even though I can't get back to those locations right now, I have yet another recourse: the assistance of local researchers. If I do get stumped in my project, for a mere fraction of the cost of airfare, a well-placed request for service to a carefully-selected local genealogist may also expedite the process.

Of course, for many of us, nothing replaces the thrill of the chase. When the goal is to find it ourselves, that sometimes trumps even the goal of finishing the case. Besides, what can replace the chance to meet up with interested family members and share what's been discovered?

In the matter of this postponed trip, though, I suspect this one time I will cave and find a way to get the documents I need sent ahead to me. In addition to keeping the research schedule on track, it will give me all the more to share with family when we do get the chance to get together again. 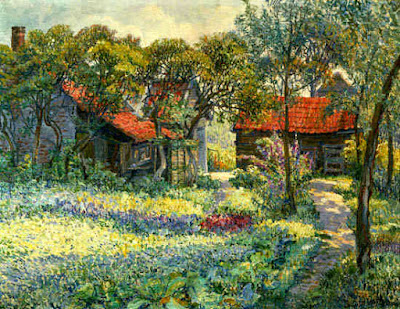 Above: "The Vegetable Garden," by Belgian impressionist painter Juliette Wytsman; courtesy Wikipedia; in the public domain.
© Copyright 2011 – 2021 by Jacqi Stevens at 2:53:00 AM