When Centuries Flash Before Your Eyes


I have to take a process break from my research. This dry spot I'm going through is such a downer. There's no other way to say it. No creative turn of phrase to make it any better. This is just the plain splat.

Yes, I admit, as I'm progressing through my mother-in-law's Gordon line, verifying all the work done twenty-some years ago in collaboration with another Gordon researcher, hitting the story of the unfortunate David Spragg and his slain family was a nadir in my family history forays.

But the downer hits didn't stop coming with the conclusion of that story. As I rush through the generations, checking Ancestry hints in census records and other key documents, I feel as if I'm seeing the panoply of our families' history flash before my eyes. And at high speed, the picture isn't pretty.

This past week, I've been working on the line of David Spragg's aunt Mary, who married a Phillips in Greene County, Pennsylvania. Of her many children, one daughter—similar to David's story—chose to leave her home town and move out west. Though certainly not a story with as tragic an ending as her cousin's, hers became a life with many disappointments. Her husband died young, leaving her to raise their four children by herself in Oklahoma Territory.

Predictably, as might any woman in those circumstances, she married again. That second marriage, however—to a widower left needing a woman to tend to the several young children bereft of their own mother—appeared to not have worked out well.

From that vantage point, a quick trip through the decades via U.S. Census enumerations seemed to trace the echoes of those familial difficulties as generation after generation gave signals of unhappy family life.

Of course, it's hard to tell. You can't simply make those assumptions, based on a once-a-decade snapshot of reality. It's so hard to read between the lines with skimpy evidence like that. But as I try to plug in the documentation alongside each name I add to this family's tree, I see sign after sign of repetition playing out, ever since that one ancestor took up the challenge to leave family and friends and move out west.

Sometimes, the speed at which we can survey several generations of a family's history can render the process a bit too revealing. We can unfold a family's history and spread it out clearly on the table for all to see within a matter of moments, aided by digitized records accessible online. Augment those documents with newspaper reports of the few family members whose names can be located in online archives, and we can almost watch those ancestors take shape before our eyes.

I sometimes watch family lines move from prominent positions in their colonial communities to more wealthy conditions in future generations, then crest a peak and begin a downhill slide. It's almost as if I can see the spoiled children of overworked (as well as, possibly, absent) fathers fail to gain the skills needed to get along with others when they can't get their own way. On their downward tumble, their broken homes suffer repercussions that ricochet through subsequent generations.

Perhaps I'm imagining things. Or superimposing my own interpretation on the flow of history. Whatever it might be, it feels like I am seeing Time flash before my eyes—the rise and fall of cultures as well as families.

Speed searching may be handy for quickly building out one's family tree, but it should come with a warning sign: "This research may be hazardous to your optimistic mood." 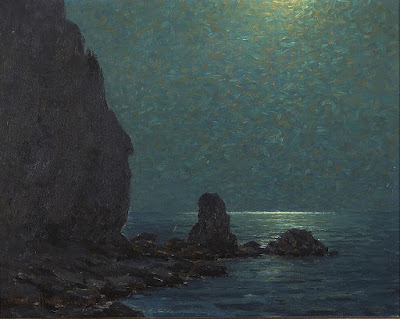 Above: "Catalina Island Coast Under a Moonlit Sky," 1920 oil on cardboard by American Impressionist artist Granville Redmond; courtesy Wikipedia; in the public domain.
© Copyright 2011 – 2021 by Jacqi Stevens at 2:50:00 AM

Email ThisBlogThis!Share to TwitterShare to FacebookShare to Pinterest
Labels: A Process Break, Gordon