It doesn't take long, trawling through the daily offerings on various online sites, to realize there is a lot of angst over inboxes doing what they're made to do: receive emails. You would think a category should be added to the next update of the DSM for the mania over that obsessive-compulsive drive to keep one's inbox in its pristine—read: empty—state.

I've seen this stuff for years. I can't even begin to link back to sterling examples of the drama, although travel-hacking Chris Guillebeau's marathon riddance of emails on a trans-Pacific flight stands out in my mind. (Apparently, though, he's been at it more than once, as this other post mentions, during a brief hop over to Alaska.)

The experts reign supreme, with all this pent up demand for How-To articles that spell it all out, in excruciating detail—like this four-for-one bonanza at HubSpot.


There are two types of people in the world: those with hundreds of unread messages, and those who can't relax until their inboxes are cleared out.


If you haven't guessed yet, I fit in the former category. It does me no harm whatsoever to co-exist with an inbox containing multiple unread emails. They can wait.

What I can't abide, however, is my "Hints" box racking up the numbers for my trees over at Ancestry. I like to think of my genealogical projects as eventually coming to some sort of closure, and lowering that hint count is one way to measure progress.

Don't think that's a reliable gauge of how much work has been accomplished. If you know anything about building a family tree on Ancestry.com, the more you work at it, the more the system generates hints. I've spotted that 99+ count in the top right corner of my computer screen often, and have learned to bleed down the numbers by clicking on the icon until the number magically fades away.

It doesn't just go to hint nirvana, though. Those numbers end up somewhere: in the "All Hints" count on your tree overview. Think it isn't so? Take a look at this drop down menu, then follow me to see what shaky leaf crumbs you've been sweeping under your carpet, too. 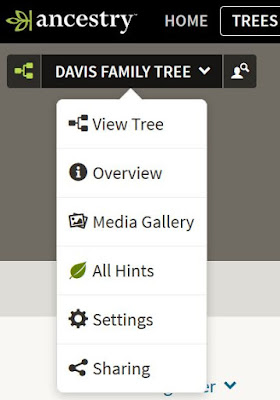 See that category, "All Hints"? If you click through on that choice, you come to a readout of all your hints. Conveniently categorized by Ancestry, it is broken down further into subheadings like  "Photos" and "Member Trees." The numbers next to those particular headings are quickly becoming my nemesis. 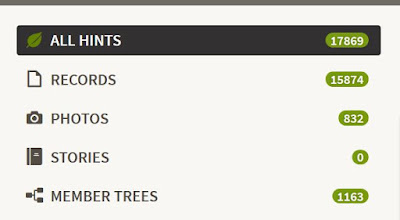 I used to try to clean out my escalating hint count by going to each offending family member's individual page and rectifying the issue there. All on one page, I could remove the absolutely never-used hint for the "Member Trees," as well as the sixty shared photos of "Nana's Pink Room," amplified in Ancestry's Echo Chamber in multiple volleys, each time someone else decides to also post that photo to her own family tree.

There is, however, one problem with that methodology: it only clears out the hints for one ancestor. Imagine my dismay when I realized that not only did it not allow me to make progress on all the other ancestors but it even added hints while I was in the very process of considering how to get rid of those other pesky hints. Sabotaged!

Imagine my glee when I discovered I could address the problem at its source, rather than piecemeal via each individual. Here in the overview, I could go straight to the offending "Photos" category and delete away to my heart's delight. Gone with a click would be the sixty versions of "Nana's Pink Room." Just as quickly could I dispatch those twin cousins of that irritating photo entry—evidently, Nana also had a Blue Room—and work my way down to Inbox Zero in the Hints category.

There was, however, one glitch in the process. Apparently, Ancestry couldn't quite swallow such wholesale delete-fests, all in one sitting. It took me a while to figure it out, but it seems those hints have a way of catching a ride on a boomerang. They keep coming right back at me.

When it comes to strategies to achieve Inbox Zero in my Ancestry Hints box, it looks like I'll have to head back to the drawing board to perfect my scheme.
© Copyright 2011 – 2022 by Jacqi Stevens at 2:52:00 AM
Email ThisBlogThis!Share to TwitterShare to FacebookShare to Pinterest
Labels: Technology and Tantrums