When the Family's Story
Doesn't End Happily Ever After


There are times, when we follow the ancestral trails of our family's history, that we encounter some stories that don't turn out as well as we'd hoped. That "happily ever after" can't possibly ring true in every case of family history, but in some episodes we stumble across, the account might even be chilling.

As I've worked through my project to catalog all the descendants of my mother in law's ancestors, John and Mary Duke Gordon, the other day I ran across an account so horrific, I hardly could bring myself to even acknowledge its place in the family tree. This is the kind of thing that surely only happens to others. But what do you do when the story does, in fact, belong to your own people?

Every family faces some hardships. Sometimes, it is in how families overcome their adversities that they become strengthened. For those stories, there is that redeeming feature that allows the family to be brave enough to divulge those initial difficulties. Those difficulties become a prelude leading up to a better resolution.

This, however, is not the kind of problem I'm talking about here. An episode like this, when it does happen, causes a shocked response. It's something people won't forget.

Long before acts of terrorism became part of our lexicon, these were the type of activity that one hoped would never occur—but once they did occur, could never be forgotten. An example of such a memory from my own childhood years would be the tower shooting at the University of Texas at Austin.

When tragic events such as this occurred, people clung to every news report, not only to hear who had fallen—and who had survived—but, in the aftermath, to hear some consolation that this devastation would never happen again. That this was not simply some sub-human monster who perpetrated all this, but that there was a reason why things went wrong.

I'm sure that was the type of response people had when they opened their newspapers, from New York to Missouri, as the year of 1894 drew to a close. Surely, in the news report they faced, this was a "madman" who had just perpetrated a heinous crime. That's how the newspapers portrayed him. And yet, only a few hours earlier, he was the gentlest of fathers whose only complaint was a nagging headache.

What do you do when you find such a story—and then realize it fits right into a slot in your own family tree? Do you doubt it and search for the "real" story to replace the family's "myth"? Do you keep looking for the reason why it really wasn't that way? Do you ignore the whole episode, and simply plug in name, dates of birth, marriage and death, and hope the rest gets forgotten in time? Or do you let your quest to uncover roots lead you to uncover the roots of what happened here, as well as what happened in the constant litany of generations? It is, after all, part of the family history. And sometimes, we just have to let history be history. And let it be told. 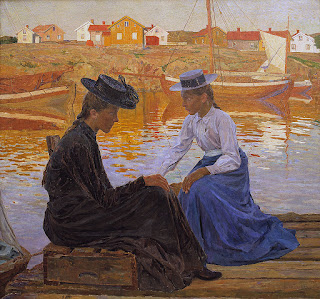