It's time to return to the search for my father's roots.

It's been a long time since I last wandered down this way, but since I've been stymied with the line I was pursuing, it will make the perfect excuse for a detour. After all, if I can't make any headway going in one direction, perhaps another route will help me gain traction.

The messy line I'm deserting—at least for the moment, as it has proven too depressing for me—is the branch of the Snider family which emigrated from Ohio to Iowa, then wandered into Minnesota and points farther west. In place of that pursuit, it occurred to me that I could adopt an old line that I gave up on—in despair—quite a while ago: that of my father's puzzling family.

True, I gave up on researching that family a while back, as well. Too discouraged to continue running up against that brick wall, I backed away and put it all aside for a while. I'm a huge proponent of the "fresh eyes" approach. Perhaps the Sniders are a good candidate for the queue to become next year's research escape vehicle.

So I'm setting aside the Sniders for the Puhalskis and the Laskowskis. Poland makes such a poet out of me; I can just feel the music being drawn out of me, even before starting again.

One virtue of setting aside research when the going gets too hard is the fact that resources are constantly being brought to light. Newly digitized collections get added to the usual go-to places, and entire new resources become noteworthy in the time of that brief hiatus. It's almost like entering a new research world, just picking back up on a deserted project.

Already, I've discovered that a number of distant cousins in that line need the 1940 census added to their list of verifications, so I'm busily reviewing each family member's entry on my genealogy database, attending to the usual documents which have yet to be added here. The 1940 census is just one step; there are several more electronic resources yielding me a treasure trove of stuff-to-be-added.

That, in itself, inspires a high note of hope that other documents will pop up which can bring me closer to a clear picture of where my paternal family may have originated. I've already received a few clues in the past—some which I still need to share here—but I can trust that there will be several more. At some point, the pile of documents may just add up to reach a tipping point, and the data tumbling out will clearly point me in the right direction for that next, big step: the jump across the ocean to the home of my paternal roots. 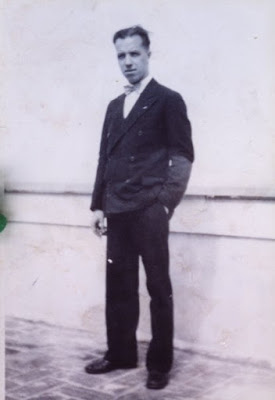 Above: My father, working as a young musician in New York City in the late 1920s; photograph in the private collection of family.