Nexus: The Spot Between Free and Fee


Considering the possibility that the world of genealogical research may well have transitioned from the position of freely-offered mutual assistance to that of pay-as-you-go, where does that put us, in the face of futuristic predictions like the articles I mentioned yesterday? At the very point at which the world may be shifting from work-driven to life awash in free time, our genealogical discipline seems to be headed counter to that trend.

In one of my favorite iconic images gleaned from my childhood—a chemical demonstration at the DuPont pavilion at a World's Fair—I've learned that sometimes, even if entities don't seem to mix, there still may be a development of a third essence at their point of contact. That nexus is neither one nor the other of the original substances, but creates a quality all its own, yet somehow retaining the qualities of each of its parent sources.

Much like making nylon—as that chemical demonstration showed—there may be a nexus at the uneasy interface between genealogy's philosophy of the free economy and the world of paid genealogy.

Face it: there are advocates for each side of the equation. I have read genealogy bloggers who go ballistic at the mere mention of placing ads on one's website, if that website has to do with a genealogy blog. On the other end of the spectrum are genealogists who wish to be paid at least a living wage for their professional services.

On the consumer side of the equation, those just starting to build their own family tree may know nothing of the tradition of peers helping peers that has been the hallmark of avocational genealogy for decades. Those may be such people as those who think nothing of shelling out the bucks for subscriptions to sites like Ancestry.com or FindMyPast.com.

The rest of us—at least those of us who are not royalty—would certainly recoil at the thought of purchasing genealogical services. Perhaps we have in mind the thought that, since we are certainly not of a heritage which boasts a significant legacy, our family's story is not worth such a great investment. We are of the do-it-yourself, commoner's variety of family history.

There are, however, dilemmas that arise in researching even the garden variety weed tree. What if we live in California, but our research demands we head to Virginia? What if our roots are in Albania? Or Zambia? Even in the places in between, if there is an ocean separating us and the documentation we seek, we'll eventually need to put out a call for help. In the nexus between free and fee research, we have learned to outsource our requests—to create hybrids between the two options.

We've seen this happen all along. On the free side of the equation, we've outsourced requests to volunteer services such as Find A Grave, where volunteers willing to snap a photo at a cemetery near their home will oblige another researcher's request—for free. Billion Graves has taken this outsourcing one step further, and provided a premium version for those willing to pay for the extra help that website has been developed to provide.

Where we once might have logged onto a genealogy forum to say, "Hey, can anyone find this obit for me," we now exchange free for the small fees asked by libraries or genealogy societies, themselves, to process our request.

Or find someone willing to send up copies of unofficial versions of birth or death records. That, in fact, was how I started using the Fiverr-like service which is now known as Genlighten. While many professional genealogists currently promote their services through this website, when I first started using them, it was because one of their founders was recommended as a direct, expeditious and reasonably-priced way to quickly obtain marriage licenses and death certificates for my family's Chicago-based ancestors. Back during the era of stamped, self addressed envelopes and interminable waits, this was a boon for the impatient researcher.

While there may be some among us who wouldn't even blink at the thought of hiring a genealogist to complete an open-ended, turnkey research project at upwards of fifty dollars an hour, I think most of us would pale at the thought. Besides, for those of us who are in this research thing for the thrill of the hunt, such an acquiescent move would be unthinkable.

The more I get into the current-day world of genealogical research, though, the more I realize there are hybrid offerings which certainly outclass the alternatives. Negotiating services for a set fee for well-defined parameters are indeed possible. Considering the cost of sky-high air fares to the far-flung places where our ancestors once lived, these newly-developed hybrid options are well worth considering. 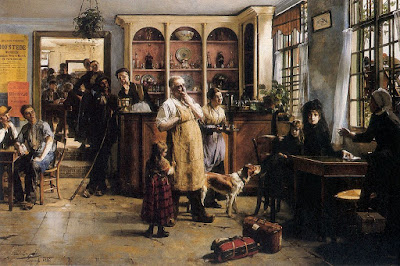