Coming up For Air


Family history can be filled with all sorts of fascinating stories. There are the details of relatives you knew—but didn't know they once did that. And there are the tidbits about ancestors long gone before you ever arrived on the scene, stories intertwined with history, and tales rescued from obscurity.

All of these are fun to uncover in the chase to discover one's roots. What isn't fun is to go through that long, dry period of research in which absolutely nothing happens. Yeah, there are surely stories hiding between the lines, but the way to tease these episodes out can sometimes elude us.

That's where I am right now, trying to tease out the details on this Snider family I mentioned yesterday. I'm currently following close on the trail of the one line which I suspect got plugged into the wrong generation. In the meantime, the chase is taking me page by page through census records. Like a series of snapshots that happen only once every ten years, it turns out to be a stop-motion picture which leaves out most of the action.

Sometimes, what's best to do when search leads evaporate is to set everything aside and take a break. I did that today. Not that it cleared the air enough to do wonders, but it was nice to stare down that gotta-find-out demon and tell it to take a hike. Those Sniders aren't going anywhere they haven't hidden themselves at, already. When I find them, I'll find them.

In the meantime, I took a drive into town, ran some errands, had coffee with someone I enjoy talking to, and ran into some friends on the way. We chatted where we met, right on the street corner (despite the hundred-plus degree temperature) because, well, there's no time like the present to catch up on news. One of these friends is only eight weeks out from a quintuple bypass during which, while still under the knife, manifested yet another medical issue that needed immediate attention. You don't just do a hi/bye drive-by when you see a friend like that.

True, when I returned home—mainly to escape the heat wave—I did eventually head back to the chase, but I've already settled it in my mind that I need to ratchet down my hopes for any great breakthroughs. You win some, you lose some. When it comes to those Sniders, this might be a case of the latter.

What I also remembered, after that break, is that sometimes, despite doing one's due diligence, the story is still not completely told. Sometimes it will never be completely told. On the other side of the issue, though, stands that bright—and compelling—hope that, having set the task aside for a season, there will be some clue which materializes, the next time I visit the issue. Perhaps it will be a realization that evolves in the process of collaborative work with a distant cousin. Perhaps it will be a document which was previously inaccessible, but now widely available to the public.

That type of hope comes with experience. This has happened to me before—this being stuck on a line I'm researching, only to set it aside for a few months and then revisit when the time is right. The lesson it has taught me is that there is always more to be found. It's just that the "finding" time is not always today. 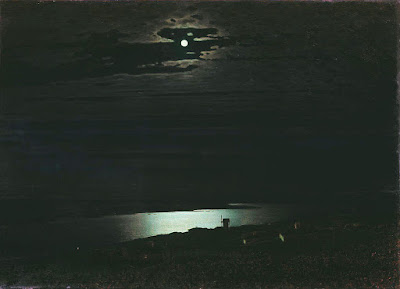 Above: Night on the Dnieper River, oil on canvas by Russian-born Greek landscape painter, Arkhip Ivanovich Kuindzhi; courtesy Wikipedia; in the public domain.
© Copyright 2011 – 2022 by Jacqi Stevens at 2:46:00 AM
Email ThisBlogThis!Share to TwitterShare to FacebookShare to Pinterest
Labels: Reflections on Research