Having a heritage that qualifies one to become a member of a lineage society like Daughters of the American Revolution is an honor. Having the ability to verify that bloodline is sometimes a challenge.

Take my maternal grandmother, for instance. I already know her mother, Sarah Ann Broyles McClellan, has a family tree that leads straight back to the documented patriot, Zachariah Taliaferro of Virginia.

Being able to connect my grandmother to that heritage is a problem. Why? Because her birth certificate—a delayed certificate, incidentally—gives her name as Rubie Broyles McClellan. Yet her marriage certificate—if the one I’ve located is indeed hers (I’m not yet fully convinced of that)—uses the name Ruth McClellan.

To complicate that issue, the person Rubie—or Ruth—chose to marry was someone who also changed his name. Our Davis family Bible showed my grandfather’s name as Roby Jake Davis. Yes, that’s how people from the hills of Tennessee sometimes named their children. Perhaps as he grew up, my grandfather might have felt that his name needed an adjustment to address some perceived expectation of sophistication. Or perhaps it was just that proper Southern style of only using one’s initials. Whichever it was, I saw that name morph from “R. J.,” as it showed in the marriage index, to “J. R.,” as I knew him, myself. The “J” moved from standing for “Jake” to representing “Jack.”

All that to say that now, I’m faced with the prospect of convincing the D.A.R. powers that be that Rubie, daughter of Sarah Ann Broyles McClellan, really grew up to be Ruth, who married Roby Jake, or R. J., who really was the J. R. Davis whom everyone called Jack. See?

So I’m grabbing at anything that can possibly demonstrate those things I know I know only because I grew up with them. None of those people I knew from the family is around to testify to the essence of what I’m trying to document.

Fortunately—though not quite to the extent of my husband’s grandmother, Agnes Tully Stevens—my grandmother believed in saving everything. Well, nearly everything. Enough to leave me scraps of evidence. Like a torn receipt from her request for a copy of her marriage certificate from Bradley County, Tennessee. And her delayed certificate of birth. These are just a few of the tokens of her identity change over the years that may come in handy, once I broach the subject with D.A.R. of whether my grandmother really was who she said she was.

Now you see why that obituary, naming “Mrs. J. R. Davis” as Sarah’s daughter, may be helpful. What is even better, though, is the big picture of the letter from which I extracted those three newspaper clippings. Apparently—though the letter is not addressed to anyone in particular—my grandmother had sent a number of documents to someone, asking for their return after they had served their purpose.

What could be the reason for her sending those clippings? My guess is that she was following up on her aunt’s suggestion to “send $1.14 to Dr. Montague Boyd for one those books on the Broyles.” You may remember that my grandmother did, indeed, contact Dr. Boyd, who in reply sent her a follow-up questionnaire for a revision he was planning for his 1959 book on the Broyles, Laffitte and Boyd families.

Whether he returned her certificates as she requested—he apparently did return those three newspaper clippings—I don’t know. What I do realize, though, is that, after all those years of signing her name as Mrs. J. R. Davis, my grandmother somehow decided to sign her note to Dr. Boyd as simply “Rubie B. Davis.” 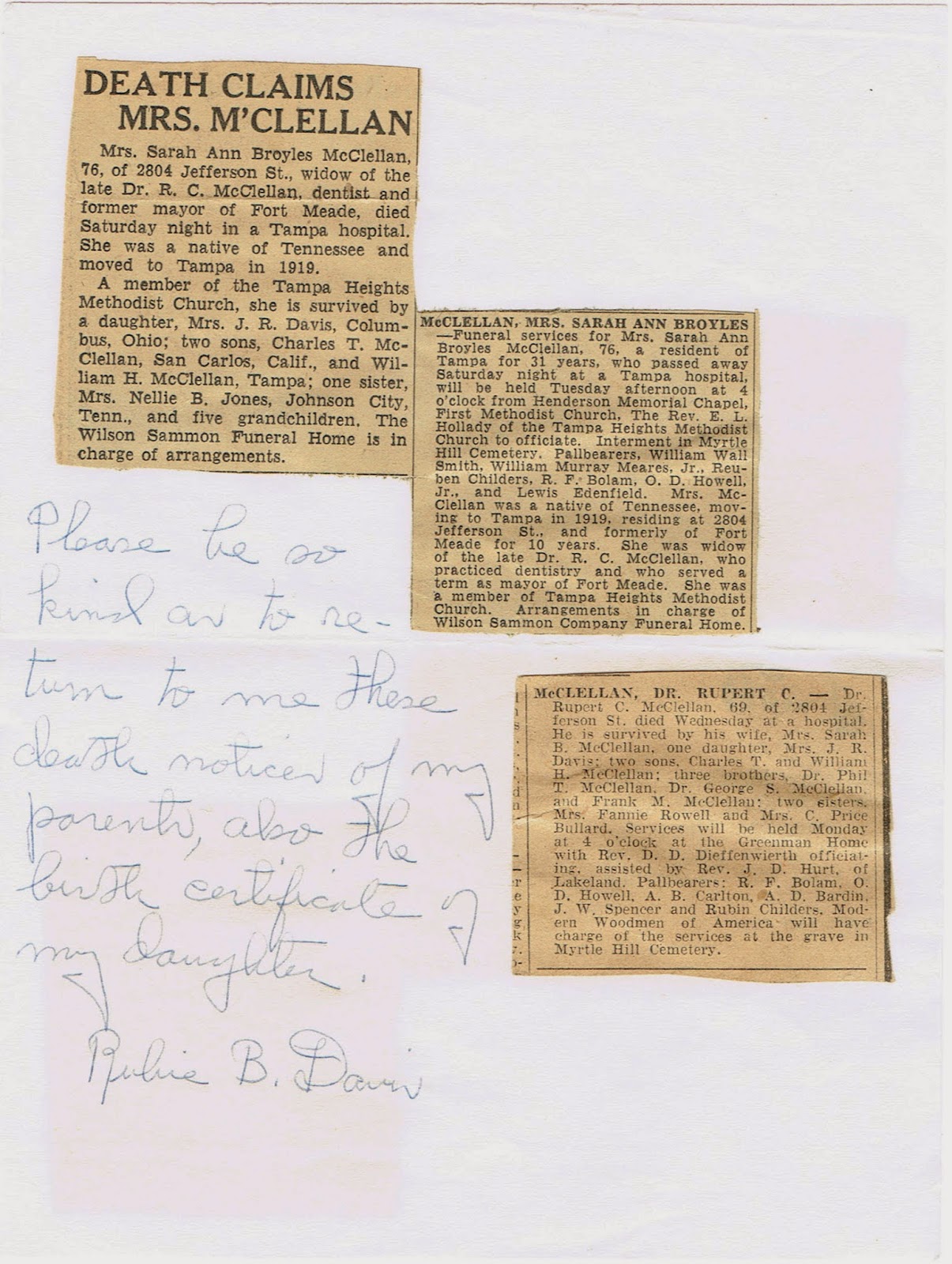 Please be so kind as to return to me these death notices of my parents, also the birth certificate of my daughter.