The year of 1875 was a happening year for one particular place “out west.” The Territory of Colorado was about to have its status changed. With the passage, on March 3, 1875, of an enabling act detailing the requirements to be satisfied for statehood, the territory was on its way to becoming the thirty eighth state of the Union.

Interestingly enough—though I hesitate to say “coincidentally”—Charles Edward Broyles, former Solicitor General for the Cherokee Circuit in northwest Georgia, chose that very month to once again pull up stakes and move far from the place he had called home.

…on the 22nd day of March 1875, I left Georgia for the Territory of Colorado, I arrived in Denver Colo. About 28th of March, and about April 1st left for Del Norte Colo. Reaching that place on the 9th of April after a nine days journey by wagon and team.

What would draw him to Colorado? Wasn’t his well-established home and business in Georgia enough to satisfy him? This is not exactly the same stage of life in which he, the young attorney, had tried his hand at agriculture by moving, along with his new bride, from his home in South Carolina to Tennessee. Nor was it the youthful exuberance that led him to send all his earthly possessions down river to move his soon-to-be-expanding family from Tennessee to Georgia. By now, seasoned attorney and politician, experienced Civil War veteran, Charles was entering his fiftieth year of life—a turning point in more ways than one.

To be sure, Colorado did have its own attractions. Way back in 1850, just as Charles was settling in the outer reaches of the state of Georgia, another party’s westward expedition from Georgia to California had discovered gold in Colorado’s Rocky Mountains, precipitating what later became known as the Pike’s Peak Gold Rush. In 1864, another prospector had discovered silver. The possibility of more discoveries to come may have held an attraction for Charles.

What was unusual about this move, though, was that Charles embarked upon the journey by himself. The notes he left in his journal mentioned absolutely nothing about why he left his wife Lucy, and even his older sons, behind in Georgia. Admittedly, the prospector’s life would not be the kind of tableau in which one would expect to find a Southern lady portrayed. But that he left home, entirely alone, still surprised me—and made me wonder why.

My first year in Colo. was spent in mining and like thousands I did no good. I went to Lake City and helped build the sixth log cabin in that place. When it was a willow brush patch. In the fall of 1875 I came back to Del Norte. The next spring I opened a law office and had good success. I made money and put it in prospect holes from New Mexico to the Gunnison Country. In 1876 I went to Ouray, made money but could not collect my fees. In the fall I came back to the then Garland City. And here I had good success at law and when the railroad got to Alamosa I went on there with it and made money also. 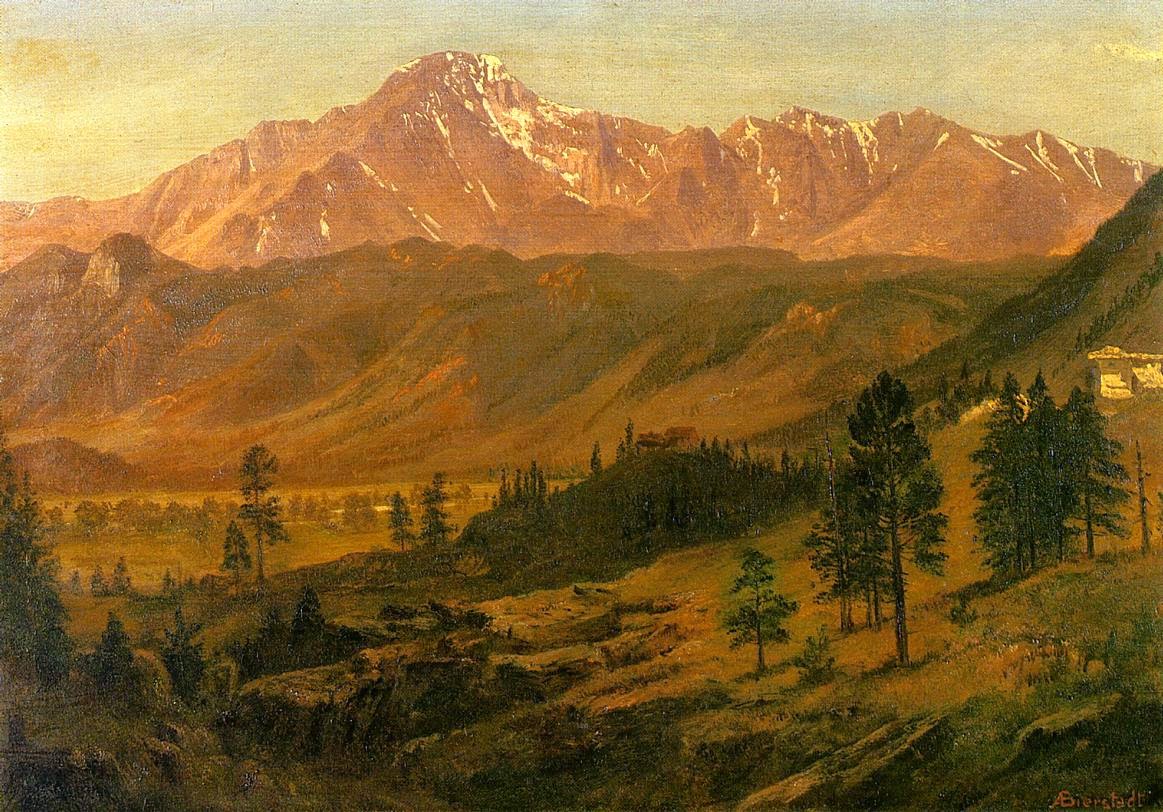 Above: Pike's Peak, painting by Albert Bierstadt; courtesy Wikipedia; in the public domain.
© Copyright 2011 – 2022 by Jacqi Stevens at 2:48:00 AM
Email ThisBlogThis!Share to TwitterShare to FacebookShare to Pinterest
Labels: Broyles, Colorado, Family Journals, On the Move