I often wonder just how it was that my great grandparents Rupert C. and Sarah Ann Broyles McClellan met. As we’ve seen, Sarah Ann Broyles was born and raised in a small mountain community in northeastern Tennessee. Her intended, however, was grandson of a pioneer settler, and grew up in the remote northern reaches of Florida, not far from the border with Georgia, on what was once a little stop on the stagecoach route west from Jacksonville. What was there in those two locations to tie them together?

Whatever it was that allowed the two to connect, I don’t know. But clearly, they had met and married by the time of the 1900 census, as we saw yesterday. Between that moment in time, capturing their humble household of three in Bristol, Virginia, and their arrival back in Florida, Rupert managed to receiving his training—and, presumably, a degree—in dentistry. If only I knew where!

Details such as this I’ve only learned from documentation as I’ve managed to find it. So far, no actual record of their marriage. No record of their first child’s birth—key, of course, for my D.A.R. application. But stumbling upon newspaper clippings like the three in a brief note written up by my grandmother, years later, has helped. Bit by bit, I’m reconstructing the family’s story.

That third newspaper clipping I mentioned the other day happens to be about Sarah Ann Broyles’ husband, Rupert Charles McClellan. He was born in the town of Wellborn, Florida, on July 30, 1871, son of William Henry and Emma Charles McClellan—making it easy to realize that the “Charles” serving as Rupert’s middle name was from his mother’s maiden name, not merely a given name of his parents’ preference. In addition to the fact that Rupert’s paternal grandfather was one of the signers of the original Florida State Constitution, his maternal heritage was richly endowed as well—at least locally. That “Charles” name figured prominently in the history of Rupert’s hometown as well, as can be seen from accounts shared on the Suwannee County Clerk of the Circuit Court’s website.

With roots as firmly planted in Florida soil as were those of this McClellan and Charles descendant, it’s no wonder he and his Tennessean wife found themselves returning to Florida sometime after the 1900 census. And, judging from the details in Rupert’s obituary, that’s where the family remained for the rest of his life. Rupert died on March 31, 1943, in Tampa, Florida.

Finding this little clipping of my great grandfather’s obituary is helpful for the links it demonstrates. For one, just like my great grandmother’s funeral notice posted yesterday, it reveals lifelong connections with some friends—notice how three of the pallbearers for Rupert in the newspaper clipping below showed up as pallbearers in Rupert’s wife’s funeral as well. Then, the article confirms the names in Rupert’s extended family. But most importantly, it provides a mention that identifies his daughter as going by the name, Mrs. J. R. Davis. Between that and several other pieces of information on my grandmother’s various aliases, I’m hoping to argue the point that “if A equals B, and B equals C, then A equals C.”

I know that works in the world of mathematics. Let’s hope it flies in the field of genealogy. 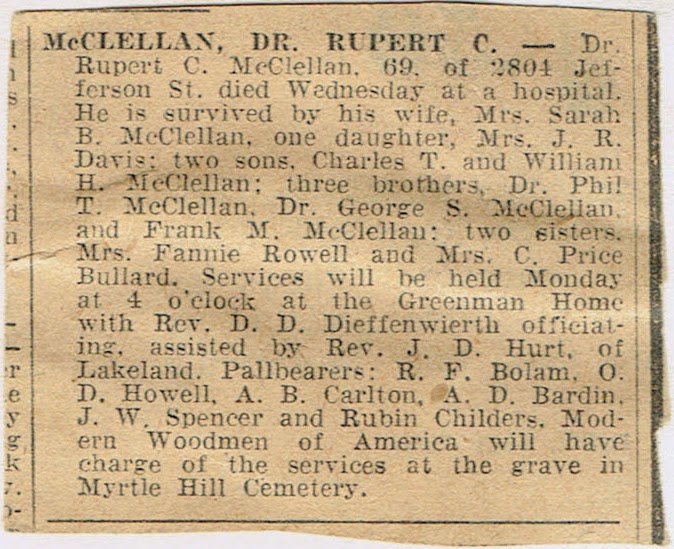