A Made Up Man

Having completed his education—if, indeed, it can ever be said that anyone has finished his education—young Charles Edward Broyles must have felt as if he were on the top of the world. His journal entry certainly makes him seem so.

I soon fell in with the belief that I was a made up man, only wanted a wife. In this my selection was incomparable good as I got one if not the best woman of her day. And beloved by every one. I married Miss Lucy A. Johnson of Barnwell, S. C. and lived together some thirty years…

The big day, as noted by some, was June 28, 1848, though I’ve yet to find anything officially documenting that date. An announcement in a local Pendleton newspaper and reports in published genealogies provided that news. Lucy Ann Johnson, coming from Barnwell “district” southeast of Pendleton, was never mentioned as “daughter of” anyone. Marrying before that useful 1850 census—the first to name each member of the household—Lucy could have been daughter of any of several Johnson men living in the Barnwell District.

A comment in Charles’ journal about his early married life caught my attention at this point. It opened my eyes to the possibility of just why some of these Broyles descendants left their hometown and moved to other states. In this particular case, I had already been aware that some members of the Broyles family had owned land in Tennessee—one, eventually, being my own second great grandfather, whose home was established near a small village there called Embreeville. I had seen mention of some Tennessee property in subsequent wills, alerting me to the fact that it had been passed down through the family. 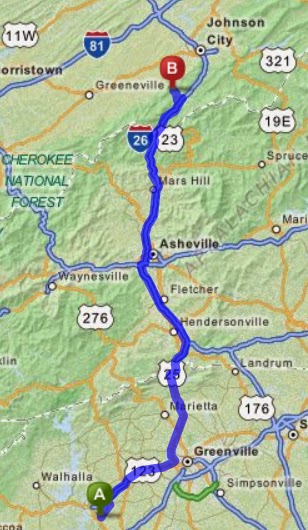 Embreeville, nestled in a bend in Tennessee’s Nolichucky River, was not exactly a convenient location for a landholder living in Pendleton, South Carolina. The journey between the two properties involved a route north through Asheville, North Carolina, and then across the Appalachian Mountains to the northeastern part of Tennessee, a trip—depending on how circuitous the route chosen—of about one hundred forty miles.

With Charles’ journal entry, it seems likely he had headed to Embreeville—although much sooner than his younger brother, my second great grandfather Thomas T. Broyles, who by that point was only a boy of seven. Unlike Thomas, though, this previous move by the newlyweds, Charles and Lucy, to Tennessee was doomed to be short lived. Though he might have gained some success at farming, that was not the life Charles Edward Broyles had envisioned for himself.

In 1849 I settled at the [insistence] of my father on Nolichucky River in East Tennessee to farm very much against my will. For I felt it was a surrender of all my life long hopes and aspirations. I had but little experience in farming and for fear of a failure, I worked hard and faithful. The result was I made a big crop, and had all the comforts of life around me. I have often thought and believe now if I had been content to farm, and remained on the place, I would have done much better in life in a worldly sense. But not so. Such was not the bent of my mind. Bright hopes of fame and fortune, shown forth upon my reason in the field of my ambition. And not satisfied, on the 18th day of December 1849 I pulled up stakes and moved to Spring Place Murray Co. Georgia.

© Copyright 2011 – 2022 by Jacqi Stevens at 2:52:00 AM
Email ThisBlogThis!Share to TwitterShare to FacebookShare to Pinterest
Labels: Broyles, Family Journals, Occupations, On the Move, South Carolina, Tennessee