Looking Back, Looking Ahead

Twenty four hours does not seem like a particularly brief segment of time. But when you think how quickly that segment of time has slipped away—times three hundred sixty five—the feat borders on the amazing. Where did the time go?

It’s New Year’s Eve. Again. If you had asked me, this time last year, what the upcoming year would bring, I never would have guessed.

I certainly wouldn’t have thought I’d be taking my genealogical research “across the pond” to Ireland. But look at us: we’ve been there, done that, and are still sorting through the data and photographs. And have our intrepid college student back home from a wonderful semester in Cork to remind us that, yes, we went there!

Then, too, I wouldn't have guessed I’d be comparing DNA tests with a cousin I never knew I had—someone who, likewise, never knew this would be the connection for a child of the government’s closed adoption policies of the twentieth century. Musing over the possibilities has pushed me into philosophical mode, bordering on the ambience of late-night dorm room discussions from college years—that cozy but hazy “what-if” pondering of intellects wandering into too many nooks of possibilities.

On the pragmatic side, though, it has prompted me to spruce up one particular branch of my family tree—the one leading me directly toward D.A.R. membership. Those Broyles and Taliaferro connections are turning out to lead back to much more than that: coupled with some associated lines, I begin to see possibilities for Colonial Dames, descent from Mayflower passengers, and other temptations dangling before my eyes.

Before knowing what next steps to take—after all, what does the blogging future hold?—it helps to first know where one stands right now. To check the trajectory, I’ve taken a look back to review my vantage point on the cusp of a new year in 2011, 2012 and 2013.

It was an interesting exercise, taking in the past years of blogging. In 2011, I had not quite finished my first full year of blogging. My sentiments at that time infused a post that has turned out to be one of my own personal favorites at A Family Tapestry. Going back and reading it again, it reminded me how our family closed out the year and faced a new one in which a dear cousin would lose her battle with cancer. And it fueled my resolve to never succumb to the seasonal habit of forming New Year’s resolutions. Even so, I did cave somewhat, in composing what I called New Year’s Tentativities. You can see for yourself how well I did in accomplishing those—the main reason why I don’t engage in such exercises.

Still, reviewing that New Year’s Eve post reminded me of one thought on goal setting. That’s the kind of clarity I need to keep in mind while pursuing new ideas and projects:

I’ll take my dream inspiration from the type of star-following journey of some wise men long ago. They took their cue from a specific star: following it as long as it was moving, but having the good sense to stop when it hovered and to then seek further direction from details closer at hand.

A year later, at the end of 2012, I was again musing over the fleeting issues of life, reeling over the recent fact that an eager rush to the door for Christmas company was the fateful step that radically changed my aunt’s life. By the time of that year-end post, instead of following suit with the bloggers’ meme of that season—top ten lists of their own posts—I found an antidote to my melancholy mood by listing the more than ten bloggers who have been my all-time favorites. Thankfully, all of them are still at their craft for you to enjoy.

With the closing of another difficult year, come December 31, 2013, my mind turned to a simple statement of appreciation for you, my readers. After all, isn’t New Year’s Eve the time to recall “auld”acquaintances?

What’s left to say in closing out the year of 2014? While this one was a vastly improved flight of three hundred sixty five days—where did that time go?!—I still hold the same conclusions I mused over in the past three years:

·       This life is too tentative to fool ourselves into thinking goals are guarantees
·       Our life would not be the same, if it weren’t for the blessings others pour into it
·       Sharing our gratitude with those who’ve made a difference is what truly enriches us.

Oh, rest assured, I’ll have plans for the upcoming year. I’ve already uncovered enough research needs to keep me busy writing for months to come. But you know how genealogical research goes: you can sometimes fly like lightning, but other times, you can take a header into an immovable brick wall. I’ll take my cue from the three wise men and the star: follow the resources as far as they lead me, then stop and assess each next step. Maybe, just maybe, that will lead us all through another year of discoveries. 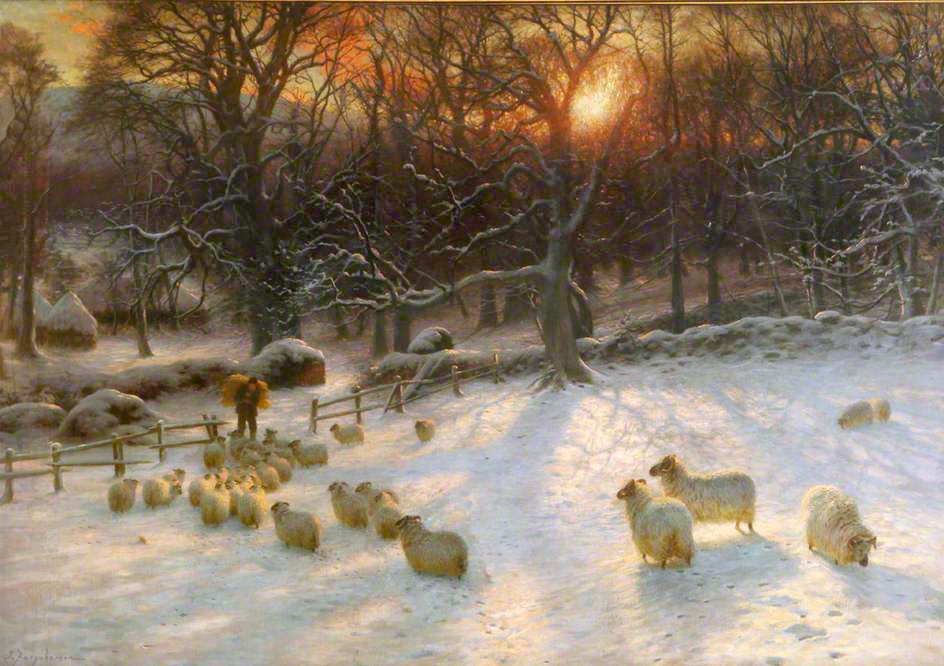 Above: "Beneath the Snow Encumbered Branches," 1901 oil on canvas by Scotland's Joseph Farquharson; courtesy Wikipedia; in the public domain.
© Copyright 2011 – 2022 by Jacqi Stevens at 2:50:00 AM
Email ThisBlogThis!Share to TwitterShare to FacebookShare to Pinterest
Labels: Holidays and Genealogy