Some Thoughts About Virginia—
Yes, That Virginia

With the most beloved holiday of the American calendar upon us, we need to set aside our puzzlement over one casualty of the Civil War and turn our attention to another story which has, as its prime player, another gentleman impacted by the devastating fallout of that episode of our history.

I’m speaking of New York State native, Francis Pharcellus Church, who served as a war correspondent during the Civil War. A time of great suffering, the war had been noted as ushering in a dearth of hope and faith throughout much of society.

Perhaps that ennui remained for the decades following the war, for by the time Francis had become lead editorial writer for the New York Sun, it provided the perfect recipe for resonance over one editorial written by Church.

The simple letter of an eight year old child, sent to—and responded by—the newspaper's editorial staff evoked a reception which, in its own right over the years, inspired everything from a cantata and an animated television special to mechanical toy displays at city department stores and annual memorial readings by well-known actors. 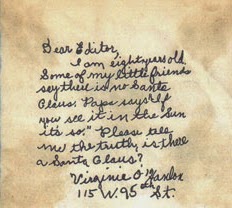 Dear Editor,
I am eight years old. Some of my little friends say there is no Santa Claus. Papa says “If you see it in the Sun it’s so.” Please tell me the truth, is there a Santa Claus?

Francis Pharcellus Church’s response became the most reprinted editorial ever to run in any newspaper in the English language.

As witness of its beloved status, a clipping from an undated, unsourced newspaper—likely one published in 1980 in Columbus, Ohio—surfaced among those papers passed down to me after my aunt’s passing. My aunt had likely saved it from my grandmother’s papers—the very Rubie Broyles McClellan Davis with whose maternal line we are currently struggling.

Just to know Virginia’s story has been treasured all these years—even in newspaper clippings stored for its remembrance—speaks clearly to the universal human need to cling to the inspiration of hope. May this Christmas bring you a portion of that hope as well.

NEW YORK (AP)—The question is famous, the answer more so.
Eighty-three years ago 8-year-old Virginia O’Hanlon of New York City was concerned because “some of my little friends say there is no Santa Claus.”
Her father told her, “If you see it in The Sun, it’s so,” and she wrote a letter to the now-defunct New York newspaper.
“Please tell me the truth, is there a Santa Claus,” she asked. A writer for the paper, Francis Pharcellus Church, was assigned to answer.
His editorial and its confident statement—“Yes, Virginia, there is a Santa Claus”—is legendary.
“He exists as certainly as love and devotion exist, and you know that they abound and give to your life its highest beauty and joy,” Church wrote.
“Nobody sees Santa Claus, but that is no sign that there is no Santa Claus. The most real things in the world are those that neither children nor men can see.”
He wound up: “A thousand years from now, Virginia, nay, ten times ten thousand years from now, he will continue to make glad the heart of childhood.”
More than 60 years later, Virginia, by then Laura Virginia Douglas, a widowed New York City school principal, continued to visit orphanages at Christmas, spreading belief in Santa. She died in a nursing home at the age of 81 on May 14, 1971.