One Thread to Tie Things Together

Before we can link my maternal grandmother—and her various aliases—to her mother, my D.A.R. connection, let’s take a look at the other newspaper clippings I’ve recently found regarding patriot’s descendant Sarah Ann Broyles McClellan.

We’ve already seen her obituary yesterday, clipped from a nameless newspaper by her daughter, my grandmother, and pasted on the page of a letter. Alongside that obituary came a funeral notice, complete with the usual Southern listing of all the pallbearers at the ceremony.

What is interesting about that dull, dry litany of names is that, while from a cursory glance it may not seem significant, once we delve into the list further, I realize that some of these are names I do recognize, simply by virtue of immersing myself in this research for all these years.

Let me get a running start before explaining that statement. First of all, Sarah Ann was born November 13, 1873, in Washington County, part of eastern Tennessee. She was daughter of Thomas Taliaferro Broyles and his wife.

Depending on which researcher’s family tree you read, that wife’s maiden name has undergone several permutations, so I won’t even bother to mention it—whichever one it really is—here. To make matters more difficult, Sarah Ann’s mother may have been adopted, so who knows what her parentage really was. To top that all off, the woman died shortly after giving birth to Sarah’s younger sister—which, incidentally, happened before the kind of records you and I like to find started being kept by governmental authorities. So, let’s just say her name was Mary, and leave worrying about her real surname for later.

Through a story I’ve yet to uncover, somehow Sarah Ann Broyles from northeastern Tennessee met and eventually married Rupert Charles McClellan, a descendant of a Florida pioneer settler in the northern part of the state. They married in 1898, when she was twenty four years of age.

Some things never change. Apparently, the newlyweds-on-a-shoestring cast about for a decent place to live and a vocation for Rupert to adequately provide for his young family’s needs. By the time of the 1900 census, his was a family of three, living in a boarding house in Bristol, Virginia, where he worked as a telegrapher. Note their firstborn daughter’s name: “Ruby.” And Sarah’s mystery mother’s place of birth was reported to be Georgia. Later, we’ll need that first detail for our D.A.R. defense; the second tidbit will help us zero in on just who that mystery mother might have been.

In the next ten years, things had improved. By 1910, the household included both a daughter and a son. The most important detail was that “Rubert” C. McClellan was now serving as a dentist in the tiny central Florida town of Fort Meade—no longer the lowly telegrapher in Bristol, Virginia.

Those years in Fort Meade—totaling about ten, up until Rubie graduated from high school—came to a close with the relocation of the McClellan dental practice to Tampa. And that is where we pick up the story with today’s newspaper clipping. A funeral notice, it provided details of that last commemoration of the widow Sarah Ann Broyles McClellan after her death on October 7, 1950, in Tampa. 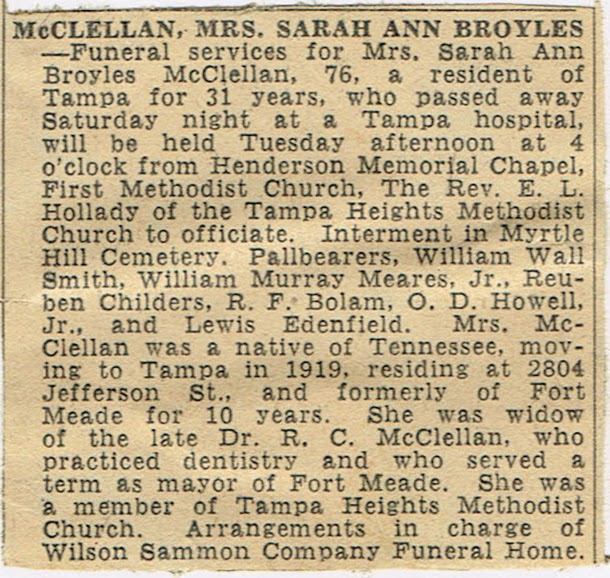 McCLELLAN, MRS. SARAH ANN BROYLES—Funeral services for Mrs. Sarah Ann Broyles McClellan, 76, a resident of Tampa for 31 years, who passed away Saturday night at a Tampa hospital, will be held Tuesday afternoon at 4 o’clock from Henderson Memorial Chapel, First Methodist Church, The Rev. E. L. Hollady of the Tampa Heights Methodist Church to officiate. Interment in Myrtle Hill Cemetery. Pallbearers, William Wall Smith, William Murray Meares, Jr., Reuben Childers, R. F. Bolam, O. D. Howell, Jr., and Lewis Edenfield. Mrs. McClellan was a native of Tennessee, moving to Tampa in 1919, residing at 2804 Jefferson St., and formerly of Fort Meade for 10 years. She was widow of the late Dr. R. C. McClellan, who practiced dentistry and who served a term as mayor of Fort Meade. She was a member of Tampa Heights Methodist Church. Arrangements in charge of Wilson Sammon Company Funeral Home.

So, there it is: that list of pallbearers. I start to dutifully read through the list, just to be nice, I suppose. But it doesn’t take long to realize I’m recognizing some of those names.

Remember “Wall” Smith, the guy I couldn’t figure out? The one who had his picture taken in 1949, on the front steps of a bank with half its name cut from the frame? He was the one who married my grandmother’s dear high school chum, Lula Childers. That was the marriage certificate that recorded Sarah Ann Broyles McClellan as witness.

And another long-time friend from Fort Meade showed up in that list as well: Reuben Childers, the one who, along with his wife, likely had hosted my grandmother’s visit back to Fort Meade in 1949. Now, in retrospect, as I re-consider those photographs of the visit, I wonder if that was my great-grandmother who was the unidentified woman in the group portrait. She seemed to have a life-long friendship with those past neighbors from Fort Meade—the kind of good memories that lingered to the end. And beyond.

While this funeral notice doesn’t supply much of what a genealogist prefers to find in such records, it does provide a brief biography of the woman and her husband. While none of the pallbearers were family members, they do represent a legacy of friendships that grew from that small town neighborliness in a special place they once called home.
© Copyright 2011 – 2022 by Jacqi Stevens at 2:41:00 AM
Email ThisBlogThis!Share to TwitterShare to FacebookShare to Pinterest
Labels: Broyles, Florida, Georgia, McClellan, Newspaper Clippings, Occupations, On the Move