The Woes of Spelling

When it comes to the surname Stevens, in preparing for this big Ireland research trip, I have to brace myself for the possibility of discovering the unthinkable: our Stevens line may not be Irish, after all.

Granted, I am personally not very vested in the outcome of this debate. My own family has already dealt with their own shock, after a genealogical discovery that we were not Irish, despite being raised with a “Mc” surname. (We’re Polish—but that’s a story for another research trip.)

The Stevens family? Well, they always knew they were Irish. And, for the most part, they were—thanks to those Irish Tully, Flannery, Flanagan, Molloy, Falvey and Kelly lines. Not too sure about the Stevens line.

When my husband started receiving matches for guys whose surnames did not begin with S-T-E-V-E-N-S, well, that was our first hint. Discovering one of those matches boasted a Russian surname and gave his current address as Siberia did not bode well for our Irish-origins confidence meter.

I had talked this over with a few of my associates knowledgeable about the subject, like Katherine Borges, co-founder and director of ISOGG, the International Society of Genetic Genealogy. Or Dr. Maurice Gleeson, an advocate for the use of DNA testing in Irish genealogical research, whom I’ll be seeing when I attend the Genetic Genealogy Ireland event in Dublin this October. For the most part, I got much ribbing about the possibility of a wink-wink-nudge-nudge “non-paternal event” somewhere in the Stevens past.

Of course, it didn’t help, a few weeks back when I was going through the Boston College Missing Friends collection, to discover an ad inquiring about the whereabouts of a John Stevens who, as it turned out, was a British man traveling under that name as an alias.

But let’s assume our John Stevens really was a Stevens. And that he came to this country from County Mayo via the Liverpool ship bound for New Orleans in 1850, just as he claimed he did. Turns out, even researching the history of the surname Stevens doesn’t give us much hope for Irishness.

Take this write up on the surname’s history from The Internet Surname Database, which states Stevens is a British surname, “although of Greek origin.” Wikipedia comes out and flatly states it is a surname of Anglo-Saxon origin. Things get darker over at Ancestry.com, where the text advises the name is “also found in this spelling as a Dutch and North German name,” and cautions that it might also be “an Americanized form of some like-sounding Jewish name” or even an anglicized version of some similar names originating from other European languages, like Stefan. Good grief; maybe even Stevens was originally a Polish name, as well.

Just in case the dream could still be alive and Stevens really was an Irish surname, I headed back to the trusty Irish Ancestors section of The Irish Times website. There, you have to enter the surname you are searching in their search engine dialog box here, and then the results come up.

First off, I saw an extensive list of “recorded variants listed in other sources” on a sidebar on the right of the page. I’ve already become well accustomed to having to consider both the Stephens spelling as well as the Stevens version—but this list included thirteen spelling variations! Clicking through to a longer list provided the sources for each of those versions of Stevens spellings. My glimmer of hope was that, thankfully, one of them resided in County Mayo.

The original Irish for one of those variations looked native enough in its form: Mac Stiofáin. For some reason, The Irish Times claimed that name was anglicized to Stephens rather than Stevens. I’m not sure why. According to them, the name was “a patronymic adopted by some Norman families.” What happened to the original people in Ireland from whom the immigrating Norman families adopted it?

A second possible origin of the surname was Mac Giolla Stiofáin, which was given as a “native name connected with Laois,” a county in the Midlands region of Ireland.

And then, the clincher: according to the Times, the Stevens surname was “also the name of later English immigrants.” The two main areas in which the surname was found were Dublin, on the eastern coast, and Belfast, bastion of the northern portion of the island still under British rule.

Could there have been any Stevens family members in County Mayo at the time in which our John Stevens left home for America? Possibly. Returning to the only document available for that time period and location, Griffith’s Valuation does mention one Stevens family in the parish Killasser. Switch that spelling to Stephens, and the number jumps to fifty seven—including three named John. And yes, one of them was also in Killasser.

My only tie-breaker in trying to ascertain which Stevens might have been ours would be the name of a possible relative. Arriving about a year after John Stevens had come to Indiana, someone by the name of Hugh Stevens had replicated John’s exact route and ended up in the same small town of Lafayette. I’d like to presume he was a brother, but I can’t tell for sure, because after signing his Declaration of Intent, he seemed to disappear from all records in the area.

Looking back to the Mayo homeland Hugh also was claiming, I find nothing for him under the surname spelling of Stevens. Ditto Stephens. Could it be this man was traveling under an alias as well? Sometimes, searching for these missing ancestors makes it seem as if we are researching aliens from another world.

The Internet Surname Database mentioned that the Stevens surname originated from a Greek given name, “Stephanos,” meaning “crown” or “wreath.” The Greek name references the customary wreath of laurels with which the victor of athletic champions was crowned. If I ever attain to the secret behind our own Stevens family surname, after undergoing the endurance trials of this research challenge, it will certainly feel like a time to call out the victor’s crown. 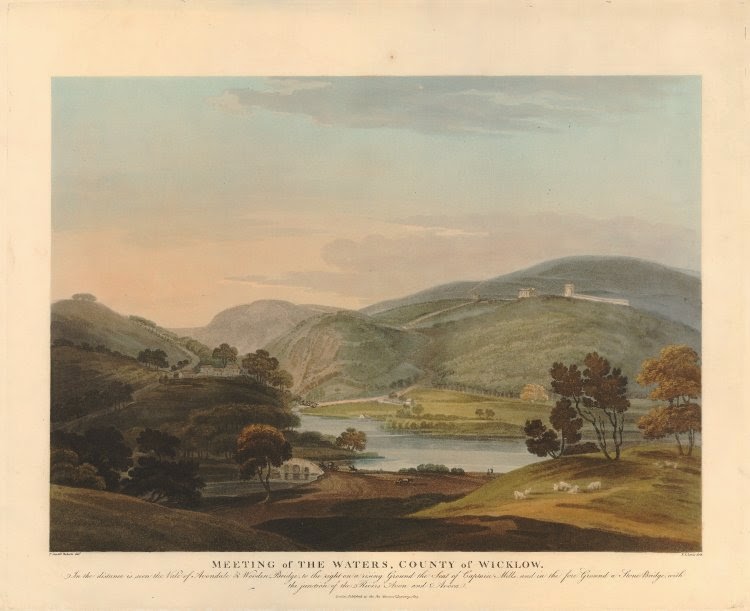 Above: Irish artist Thomas Sautelle Roberts, "Meeting of the Waters, County of Wicklow," aquatint produced by English engraver Frederick Christian Lewis in 1804; courtesy Wikipedia; in the public domain.
© Copyright 2011 – 2021 by Jacqi Stevens at 2:52:00 AM