Yes, I know that is a term usually deployed by military personnel. It’s just that I’ve been seriously contemplating hotel reservations, train tickets and flight schedules for four different people. Oh, and class schedule for a fifth person. And maybe a guest.

You see, this research trip to Ireland has blossomed into a mini-family reunion of sorts. My husband and I are going to visit our daughter, who is currently attending school at University College Cork. His sisters are going to join us for one week of tromping around the west coast of the island. One sister’s husband may fly in for a weekend. And one new-found college friend may come along for the ride.

I used to be amused when, at the grocery store—now, doesn’t that strike you as a quaint term?—I would flip the package of whichever gourmet treat I was considering purchasing, and see, on the back label, that it was delivered to my local store expressly by the XYZ Logistics Company. How appetizing. Somehow, the art of delivery has moved from the realm of foodstuff to factory assembly.

If the supermarket can use the term, so can I. I am, after all, coordinating the travels of an itinerant foursome—sometimes five-some or maybe even more—who are, mostly, out to research the rural outreaches of western Ireland, all in the hopes of locating our ancestral roots.

The amount of time sucked out of daily life by online travel arrangements is exceeded only by the time it used to take to make such maneuvers via telephone. By mid-afternoon yesterday—after getting in our preparatory daily walk, as darling daughter insists, “You walk everywhere”—I had succeeded in securing one reservation. Yes, only one. At least it was for two days.

My great disappointment was in discovering that the one place where I had most hoped to stay—no surprise here, it was indeed a castle—has vanished from the face of the Internet. I cannot replicate the search which conjured up the dream destination. That, alone, ate up half a day last week. No more time to search for such oddities; if I don’t find something practical—and quickly—it will be the park bench for the bunch of us. I don’t think that will go over well with the in-laws.

On the transportation front, we are currently negotiating the use of a rental car, which the agency insists will fit five people. Right. Turns out, it is a Toyota Corolla. In my book, that was a fresh-out-of-college starter car. It will take a lot more walking before five of me can fit into one of those.

When it comes to road trips and rental cars, let us not discuss the fact that we shall be driving on that other side of the road.

And did I mention we will be doing that, driving a stick shift?

Moving on to luggage. It doesn’t help my case that we are traveling during a season in which the temperatures will be plummeting from their summer highs to a seasonally adjusted fifty to sixty degrees.

What? You say those are the same as the summertime temperatures?

Let’s just say the clothes I wear during our type of summer weigh a lot less than the ones I wear during our wintertime—which has just about the same temperatures we can expect to have, once we arrive in Ireland. And I can only pack fifty pounds of those winter togs. For three weeks. That, incidentally, will be after we include all the vital material omitted from the previous traveler’s exodus to Ireland.

There will be virtue, however, in packing light: we need to wrestle those bags out of the airport, into a bus, onto a train, and into a cab, before we can kick our feet up at our hard-won hotel room. Maybe instead of walking every day, we should have been lifting weights.

The light begins to dawn on me, somewhere in the midst of struggling with all these arrangements, that this might be why so many people prefer the turnkey offers of one-price-buys-all. Pay your money, get whisked to your destination, stay put for a week, return home. Easy.

But who am I kidding here? There’s no reason to gripe. After all, we’ll get to see our dear daughter, who has been away from home for ages two months. And we’ll get to join the hordes of “dewy-eyed Americans” (as comedian Pete McCarthy called them) seeking our roots in the farthest outposts of Ireland. Even if I can’t make all those schedules align just the way I want, I really couldn’t ask for more. 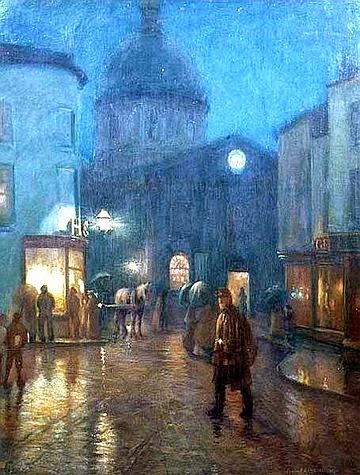 Above: "A Steady Drizzle," oil on canvas by County Limerick native, Norman Garstin; courtesy Wikipedia; in the public domain.
© Copyright 2011 – 2021 by Jacqi Stevens at 2:51:00 AM