A Microcosm of Irish Experience

I’m not sure whether the Irish would agree with this statement, but when I review the history of the supposed homeland of our Stevens ancestors—County Mayo—it seems to me to be an intensified version of what was experienced throughout the rest of the nation in any given era.

Take the details on the time of the Great Famine. While much of Ireland suffered, it is said that the catastrophe was accentuated in impoverished County Mayo, where “nearly ninety per cent of the population depended on the potato as their staple food.” By 1848, just before John Stevens’ likely emigration, County Mayo was considered a place of “total misery and despair.”

A sense of the desperation felt during those times may have been echoed in the very origin of the term, “boycott.” Though the word came into use much later in the nineteenth century—certainly long after our John Stevens left his homeland—its history and origin in County Mayo gives a sense of the deprivation, yet resilience, in the face of unjust demands. 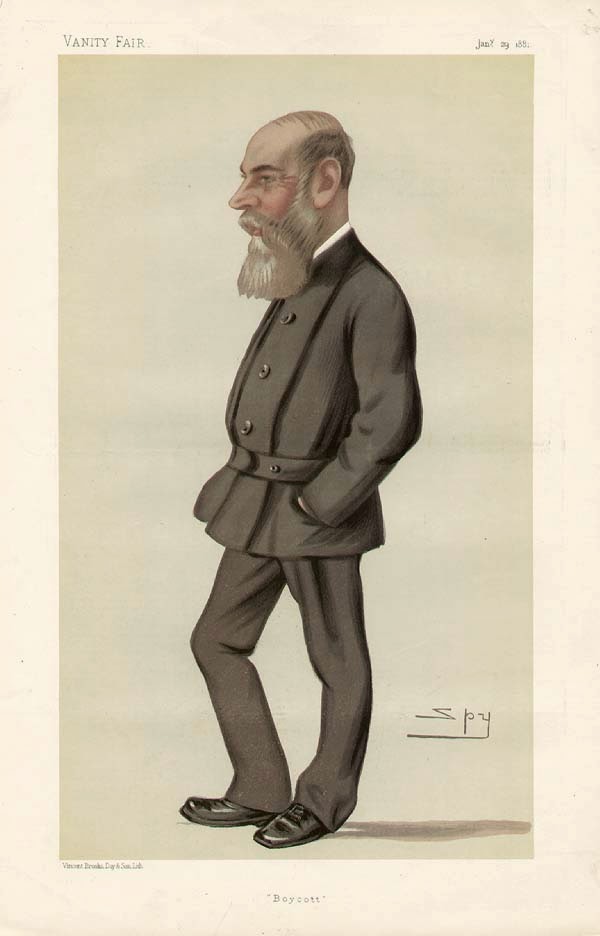 The collective action we now call a “boycott” was a term derived from one specific person’s name. That person was Captain Charles C. Boycott, a land agent living in County Mayo, who was employed by absentee landlord John Crichton, Third Earl of Erne. Due to the agent’s mishandling of relations with the agricultural workers of Lord Erne’s land in County Mayo, the Irish Land League devised a scheme of, well, boycotting the agent.

Of course, that wasn’t what they called it at the time, but after the widespread action produced notable results, the term stuck.

The entire disagreement occurred over yet another year of poor harvests, in the face of which the land agent, Captain Boycott, insisted on evicting eleven hapless tenant farmers. The response from the residents of County Mayo was that no one would do any work for the man, and workers had to be imported from outside the county to save the harvest—amidst heavy police security and other costly measures, rendering a net loss for the lord’s harvest that year. The incident attracted international attention.

But what of the earlier years of “Contae Mhaigh Eo,”—“Plain of the Yew Trees”—before John and his brother Hugh emigrated? Famine was evidently not just an isolated event occurring from 1845 onward; poverty and hunger were widespread in the county in the earlier part of that century.

The previous century was also considered to be “a period of unrelieved misery”—not only because of the poor harvests or punitive land policies, but also because of laws penalizing practicing Catholics. In a move of rebellion in 1798, joined by forces from France, the county saw military involvement in what eventually became a short-lived “Republic of Connacht.” After one successful battle, the Mayo and affiliated French army were defeated in their second battle in just one half hour. “Denis of the Rope,” the high sheriff for County Mayo, was tasked with retribution for the men of County Mayo who were party to the rebellion.

Moving back another century in County Mayo’s history, in the aftermath of Oliver Cromwell’s overthrow of the English monarchy, things did not go particularly well for County Mayo. Those who were not welcoming to Cromwell’s administration were forced to leave Ireland. Those who sought more agreeable relations were rewarded for their compliance with land grants “west of the [River] Shannon” putting population pressure on the less-arable land in the county. And of course, the continuing saga of the shunting away of the Catholics was an ever-constant corollary theme.

County Mayo’s history, going back through the ages, was peppered with curious cameo appearances.

Though there were such interesting occurrences—at least in textbook fashion for us armchair time travelers—the overall flavor of life throughout the centuries in County Mayo was bland at best, destitute at its worst reality.

If County Mayo was indeed where our ancestor, John Stevens, originated—and eventually chose to leave—there is no question but that any destination would likely lead to a better life for him and his future descendants.


Above right: Caricature of Charles Cunningham Boycott by "Spy"—Sir Leslie Ward—in the 29 January 1881 edition of British magazine, Vanity Fair; courtesy Wikipedia; in the public domain.
© Copyright 2011 – 2021 by Jacqi Stevens at 2:43:00 AM