When it comes to planning a genealogical research trip to Ireland, what is the first thing a bibliophile would naturally do? Why, turn to books, of course!

It goes without saying that the mainstay of my preparatory reading was John Grenham’s Tracing Your Irish Ancestors, and I’ve mentioned as much in prior posts. That said, you are probably already aware that I was hampered in having only the second edition of that resource—and that the author has since gone far beyond that 1999 publication. Thankfully, many of the details from the current, fourth edition, can be found, browsing through the “Irish Ancestors” section of The Irish Times.

Beside the Grenham book, though, I’ve been surrounded by a wealth of other reading resources. The goal, in reading through many of these volumes, was to absorb not only the genealogy of our family, but the history through which their generations were shaped and influenced.

One of the first such resources our family availed ourselves of was Thomas Cahill’s How the Irish Saved Civilization, a wonderful perspective on the Irish journey through time, particularly clarifying those murky early years from the time of the Roman empire onward.

It was nearly fifteen years ago that I added another book to our reading preview of the long dreamed of Ireland research trip, a small “Micropedia” volume by Seamas Mac Annaidh entitled simply, Irish History. A handy—and indexed—book, it presented Irish history in the format of brief one to two page, illustrated summaries, making it a handy reference source.

When our daughter moved into her high school years, she began developing a keen interest in Irish history—particularly of the ancient and medieval kind. That’s when the book collection began in earnest. Of course, I have yet to complete this reading list, but it certainly broadens my perspectives on what lie in our ancestors’ past. 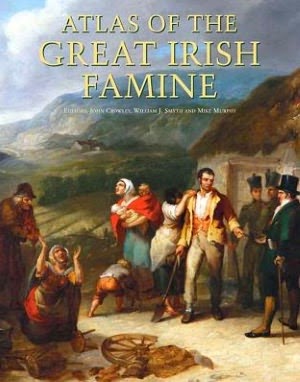 The sizeable volume, Atlas of the Great Irish Famine provides more detail on that tragedy of national deprivation than anyone now would care to know, but it helps bring reality to our modern understanding of what our Irish ancestors—at least, those who survived and emigrated—endured.

While the Atlas concerned itself with the many aspects specific to the Great Famine, there was a broader milieu in which such tragedy ultimately played itself out. The political underpinnings of this event reached far back through the preceding years—actually, centuries—as the English control of the island eventually reconstituted the Irish customs and traditions.

With that understanding, I add one more book to my to-do list. Though it doesn’t deal directly with our own ancestors’ experience, Making Ireland English also provides a look at the remaking of Ireland—this time, focusing on the aristocracy of the seventeenth century.

Sometimes, this type of reading is difficult to continue, for the level of rage it can call forth in the unsuspecting reader. When I sit down and take the time to consider the specific details of the day to day realities these people faced, I can hardly bear the thought. I sometimes have to set aside such deep considerations and shift to more cheerfully pragmatic material, such as the tour guide my friend gifted me with recently.

One other gem I’ve been saving until I felt I had done enough research grunt work to merit a reward is finally within reach. I have resisted the urge to squander my time flipping through the pages of the splendid photography of David Lyons’ Ireland: A Panoramic Vision. You know how it goes: with good intentions to tackle a project, one sticky problem surfaces and the mind looks for an easy out to occupy the diverted attention. This book could have been my “Ooh, Shiny” escape, but I resolved to not let that happen.

With only a couple weeks left until the packing begins in earnest (I never was a pack-in-advance kind of traveler), I think now is just the time to feast my eyes on this coffee table sized volume’s colorful displays of the many facets of the land which we will soon be visiting. 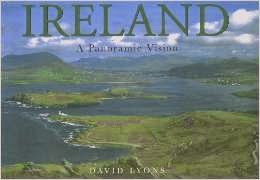