Of Technology and Tantrums

Let’s just say I sometimes do my genealogical research online at a rather late hour. And let’s just suppose, as a figure of speech, that such late hours are times when it might be more likely for cyber-spirits, ghosts and such to exert their influence on the unwary tech services of the databases I prefer to haunt.

Now, pre-midnight hours aren’t exactly what I’d consider late hours, but we have to consider one additional fact: the online services I’m utilizing are not located here where I reside, but eight time zones away, where I am seeking research bonanzas.

My mental math is getting pretty sharp lately. After all, I’ve had nearly two months of practice at adding eight hours to what is essentially a base-twelve counting system.

The woes I am about to recount to you began when I started getting irritated over a particular Irish website. Every time I tried to access that particular server, the system was down. Down, as in:

The site could be temporarily unavailable or too busy. Try again in a few moments.

Now, that would have been fine if it were a visit to a mere curiosity I had stumbled upon while cruising around on Pinterest, but it wasn’t. It was a research mission to a website offering a searchable version of Griffith’s Valuation, and I needed to access it in preparation for our research trip to Ireland.

After several nights of failed attempts to recreate a search I had once—note, that’s once—completed, it finally dawned on me that I usually did my trials when it was approaching four in the morning. Over there.

I’ll let you do the math to figure out what time it was on my side of the equation.

How could the site be “too busy” at four in the morning? Could it be that the tech people over there actually took their system offline at that time of night? And I just happened to get on the wrong side of that wavelength?

So the other night I was at my computer, doing what I usually do in the evenings: search the Net to locate what else I’m missing before we head to Ireland. I wanted to look up something on Griffith’s Valuation. Again.

Yep, it was offline. Again. And since I just couldn’t stand it, I went Googling to find an alternative. Which I did: Ancestry.com.

For those of you who follow along here at A Family Tapestry, you know when I find something I would have needed to footnote, if this were a research journal, I try to hyperlink the key terms back to the online resource, so you can follow my tracks. Since not everyone pays for—or can afford to pay for—subscription services, I try to find a free version of that same resource to use for my links. That’s why the Irish site for Griffith’s was superb—when it was up.

But hey. Bird in hand. I’m shameless when it comes to loyalties. I headed to Ancestry’s version of Griffith’s Valuation to check things out there. And what did I find?

Not the same stuff I found at the other Griffith’s site.

For instance, when I looked up Denis Tully—you know, the one I found in the County Tipperary civil parish of Templeachally—he was nowhere to be found on Ancestry’s version. The only Denis Tully to pop up there was a gent renting land in Dublin.

Wrong side of the island.

I felt like my eyes were playing tricks on me. Surely, I saw Denis in County Tipperary. Didn’t I? I went back to look, but—you guessed it—it was after four in the morning in Ireland and there was no Griffith’s website to be had.

I went on working and, as sometimes happens when I get to doing genealogical research, it started approaching the wee small hours of the morning around here. And it occurred to me, hey, it isn’t four o’clock in the morning in Ireland anymore.

So I checked on it again, and the site was back up. And Denis Tully was right there in Templeachally, just like he always was.

Now, the clincher was this: I got to thinking, if Ancestry seems to have different records for the same (?) Griffith’s Valuation, and if I couldn’t find some of our ancestors on the Irish website’s version, might I find them on the Ancestry version?

I gave it a try. And the answer to my question became a resounding “Yes!”

So what gives, here? I mean, Sir Richard Griffith did his accounting well over a century ago. It’s not like the electrons got up and re-arranged themselves on the original document. I realize there were some records which were published in the years following the original issue, so I went back to the notes for each site, trying to find any explanation like that. No such luck.

Part of me wants to be glad for what’s been found, using each version, but part of me loses confidence in the data provided by a website when it disagrees with data from another website claiming the exact same source. Something is obviously missing here. Some sort of likely explanation.

Or maybe late night hours in Ireland are closer to the Twilight Zone than we’d originally assumed. 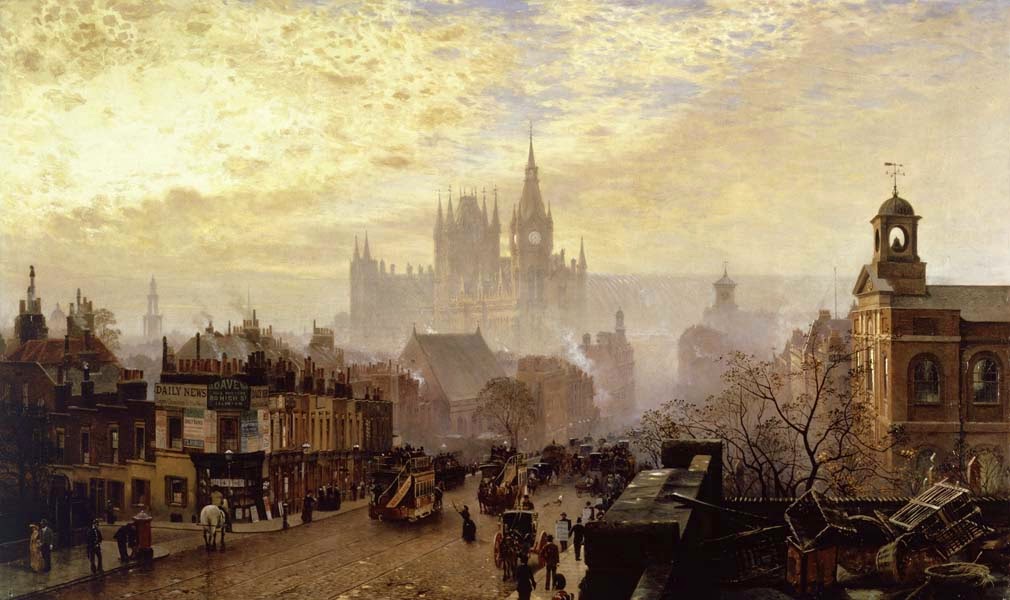 Above: "From Pentonville Road Looking West, Evening," by Irish painter John O'Connor; orphaned as a young man, he started as a scene-painter first at theaters in Belfast, then London; courtesy Wikipedia; in the public domain.
© Copyright 2011 – 2021 by Jacqi Stevens at 2:51:00 AM