The Nooks and Crannies of Genealogy

Google may be a wonderful gift to mankind, but it has its limitations. It favors the more recent and the more recently-visited. Those out-of-the-way corners of esoteric knowledge are sometimes bypassed by such search engines in favor of the more popularly frequented digital destinations.

When it comes to genealogy in the aggregate, we’ve got a popular thing going. Not so, when we all divide to conquer our various special interests: countries of origin, political subdivisions, specific centuries, exact surnames. We divide, scramble, re-assemble and find our new groups of fellow-seekers like a grand right and left on the dance floor of human history.

In my case, before my husband and I leave on a research trip to Ireland in less than a week, I still hope to find more local information on the family lines I’m seeking. For instance, on our Tully and Flannery lines in County Tipperary, I’m holding out for places to search specifically in the northern part of the county, around the village of Ballina or the townland of Tountinna.

At the first, of course, I relied on Google. And the major online genealogical players, like Ancestry.com and FamilySearch.org. I’ve since made a switch to searches in Ireland—google.ie is now my friend—and learned about online repositories the Irish would tend to seek out in their parallel quests. But there is still more.

I think all of us who have been around this genealogical research scene for any amount of time remember the earlier days of online presence, when dedicated groups of volunteers would set up websites and crowdsource their material. The network of GenWeb pages is an example of such efforts. The user pages at FamilyTreeMaker and Rootsweb were much the same.

How to navigate such labyrinths? If they were more recent additions to the Internet, Google would have snatched them up in a nanosecond. Now, they’re “so nineteen nineties” that no one pays them any mind. But they’re still there. And the information they contain is just as current today as it was twenty years ago. After all, there won’t be much change in 1800s information, whether you find it in the 1990s or the 2010s.

So I keep pushing back the margins on these fringe areas of the digital ghost towns of genealogy. Some of those cyber-resources turn out to have researchers still inhabiting them, as it turns out. Take this bunny trail I recently unearthed. The path began in a place modern-enough to our cutting-edge sensibilities: a Facebook group for genealogical researchers interested in County Tipperary.

A small note on the page invited members to take a look at their website. It was called IGP: Ireland Genealogy Projects. Looking not much different than some GenWeb pages I’ve seen, the IGP landing page hyperlinks to a page for each of the Irish counties—including one for my current research interest, County Tipperary.

Of course, unlike those commercial giants of genealogical research, these collections are limited by what information is on hand to the participating volunteers—and by the number of volunteers willing to share what they’ve found. Just like GenWeb, some local pages are wonders of organization with a wealth of material to behold. Some are just annoyances eating up valuable research time for those who turn away, empty-handed.

I can’t say I was particularly successful in my own pursuits on this website. No specific Flannery or Tully hits, courtesy of their search bar. But I did find something that reminded me of another resource I’ll pursue, once I get to Ireland: local newspapers from the early 1800s.

In IGP’s case, someone on the County Tipperary page had taken the time to transcribe entries from some very old newspapers. One page did turn out to have a report mentioning the Tully surname, although I can’t say it was anyone related to our line.

The curious snippet from this time machine read,

Stephen Tully, aged eleven, fair-haired inclined to curl, smooth-faced with cut on forehead. Wearing dark brown frock coat, cloth ap, and cord trousers, strayed from his father’s house. Thos Tully, Mountslat, Killenaule, on Friday 13th. He left Marlfield on Sunday last and crossed the Work-house Bridge, it is supposed, with the intention of making his way to Kerry for the purpose of going to school. Police please look out for him.

It was an advertisement appearing in the Tipperary Free Press dated Wednesday, October 18, 1837, that told the tale of someone’s Tully ancestor in the midst of family troubles. Since the announcement included the name Thomas Tully, it caught my eye, as our John Tully’s brother Patrick had, on his Ballina baptismal record, the name of a Thomas Tully listed as his sponsor.

Curious, I checked out that particular Thomas Tully on Griffith’s Valuation, and sure enough, there was a Thomas listed in the townlands of “Monslatt.” Was he close enough to our Tullys in the townland of Tountinna? Hard to say. Now, by car, it would take an hour’s drive to travel the distance. Perhaps that would remove this Tully from the realm of family possibilities.

Still, the newspaper clipping reminds me: there are Irish newspapers from that era which I cannot access from online subscription services here, but I may be able to peruse in person, once I arrive in the counties I wish to research in Ireland. That would not only go for County Tipperary, but remember I have some research to do on the mystery of the great-great-granduncle, William Flanagan of County Limerick, who supposedly was sentenced to transportation in that same mid-century time frame. Now, that would be a news report I’d like to find!

This serves also to remind me that, in this last minute push to organize the final touches on my pre-travel research, I still have to attend to family details from a couple other counties. 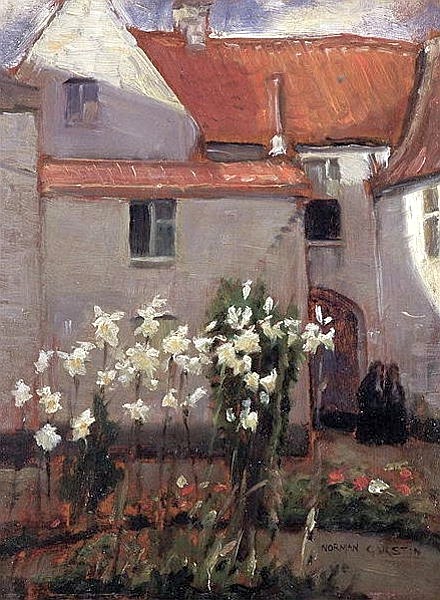 Above: "Madonna Lilies," undated oil on panel by County Limerick native, Norman Garstin; courtesy Wikipedia; in the public domain.
© Copyright 2011 – 2021 by Jacqi Stevens at 2:48:00 AM