The Changing Face of Genealogy Networks

Face it: genealogy researchers like to share what they’ve found almost as much as they liked the finding of it. And that means they’ve always needed a way to connect.

Remember queries, those hopeful letters sent to society newsletters and genealogical publications, probably by the thousands? I remember sitting in our local library, with stacks of pertinent society publications—plus Everton’s Genealogical Helper—poring over the listings in the back of each issue, hoping to find a match.

It’s been a long time since I tried that routine.

How about the listserv? Have you ever played that game? I remember one electronic mailing list I subscribed to, hosted at the University of Pennsylvania. I think I was on others through the University of Virginia. Whoever the administrators were, they became the middlemen enabling each of us to pass along genealogical information to hordes of desperate researchers.

Once online forums made their debut, they became the logical next step in assuaging that ever-increasing hunger for more genealogical information. I played my part in the early days of both Rootsweb and GenForum, both now greatly fallen from use—and GenForum about to become a read-only archive. They, too, served their purpose in their own time as the means with which genealogy researchers connected to compare notes.

With the advent of social media, it only made sense that we would once again congregate and do what we’ve always done: share and compare notes. The #genealogy hashtag is alive and well at Twitter. I’m sure Google+ has its own set of genealogical communities. There is even an APG chapter which virtually meets at Second Life.

While I’ve been on Facebook for a number of years, I hesitated to dive in to the genealogy scene there. I dunno…maybe because I always saw Facebook as a place to share more privately with people I really knew, face to face. I’ve always had that need to have a secluded space to call my own, even in the midst of all the public hubbub. So I resisted the urge to even go exploring.

Now, Facebook has experienced widespread use by genealogical organizations. Many societies boast their own Facebook page. And many Facebook “groups” have been set up—whether sponsored by a society or through other means—to facilitate communication between long-distance researchers who want to know more about a specific area.

That’s where Facebook started calling me back for a second look. I’ve been desperately seeking some local input on where to find resources on site in each of the Irish counties we’ll be visiting in the next few weeks. While I’ll spend a solid week poring over books, microfilms and records in Dublin, I have two additional weeks for leisurely journeys to the counties from which some of my husband’s ancestors emigrated. I want to get some suggestions from locals on where to go and what to see—not of a tourist nature, but regarding the local history and local resources.

For those kinds of questions, Facebook became my sole answer. I started entering the name of each county in the search bar at Facebook, and found at least one group for each destination. Granted, each was a “closed” group, but it involved the simple matter of requesting permission to join. One group even turned out to have, as its administrator, an American-based genealogist I’ve already met online: Terri O’Connell, co-founder of The In-Depth Genealogist.

In the few days I’ve been a member of each of these Facebook groups, I’ve gleaned several great suggestions and been directed to some worthwhile resources. One gentleman in a Tipperary group opened my eyes to the fact that our Denis Tully family came from a townland—Tountinna—which was (contrary to my assumption) high up in the mountains. Another member shared his work on maps, graphically demonstrating the surname distribution of his Carroll surnames; while this is not a surname I’m pursuing for this trip, it was enlightening to read about his work.

No matter which way we’ve done it—electronic email lists, online forums, or social media—it’s always been great to have a way to pose a question and see its answer come back at us almost instantaneously. On the eve of our trip to Ireland, I know it’s been a gratifying experience for me. Right now, I certainly can use the last-minute advice! 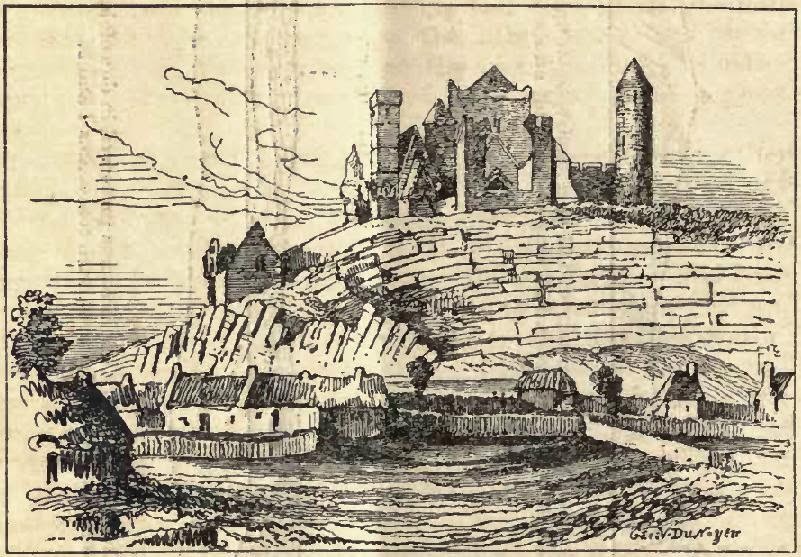 Above: "Rock of Cashel" in County Tipperary, mid-1850s drawing by geological surveyor and Dublin-born artist of Huguenot descent, George Victor Du Noyer; courtesy Wikipedia; in the public domain.
© Copyright 2011 – 2021 by Jacqi Stevens at 2:45:00 AM