In preparing yesterday’s post, there was something that troubled me about the date of Frank Stevens’ promotions. Even though I assume that there are missing letters in this collection of his family’s papers which I received during our trip to Chicago last summer, my mind wants to proceed as if there were no gaps. Even though I’ve not read through these letters until I actually sit down to transcribe them for each day’s post—insuring an element of surprise for me, at least, as I read through Frank’s progress—I still feel like something is out of order.

And it is. Going back to my “file” (a long portable table stretched out over the chair and ottoman in my bedroom, for lack of any other room in the house to leave an unwieldy, but organized, stack of papers) I discover that the carefully-stacked pile of letters, sorted by month of origin, has two surprises. 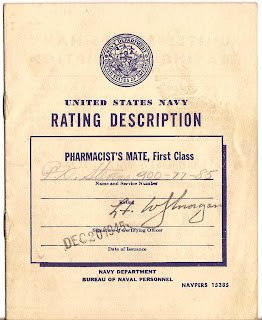 First, a closer look at the NAVPERS 15385 date-stamped “Dec. 20, 1945”—which, logically, I had put in the “December, 1945” pile—turned out to be a pamphlet “issued to you mainly to help you get a job in civilian life.” Silly me: in my initial organizing frenzy, I had assumed it was the document received when Frank was promoted to Pharmacist’s Mate, First Class. That is, after all, the label on the cover. I had had no inclination, at the time I laid out this pile of papers in what I thought was a logical fashion, to open the cover and actually read all that bureaucratese on the pages inside.
Second, inside, there was—wait! INSIDE THERE WAS…oh, no, I missed a letter! And, to boot, it was undated! Now, what? Oh, my precious organized world, obliterated by a late discovery!
On the other hand, I can take a more optimistic stance and celebrate the fact that I made one more discovery: a letter, out of sequence, that never-the-less deserves to take its place in Frank’s story line.
At least at this point, my halting “Yes, it was December 1945,” versus “No, it was December 1944” two-step can be set aside as we waltz toward the finish of this story of my father-in-law.
© Copyright 2011 – 2020 by Jacqi Stevens at 2:54:00 AM