Something seems to have turned a corner for Frank Stevens with this most recent letter home. Dated May 3, 1945, it follows only three days after Frank’s last letter to William and Agnes Tully Stevens in Chicago.
The letter also takes on a different tone—more like a heart-to-heart talk between father and son, while past letters seemed much more to be in answer to his mother’s notes.
Two new aspects present themselves in this letter. For one, whether for a transitory chatty mood or a just-plain-fed-up attitude, Frank produces not his usual one page cheery greeting but a four page missive. Perhaps it is this attitude change that beckons the censor’s scissors to do their job, for this is the first letter home arriving literally in shreds where the offending lines and phrases were simply snipped out of each page.
Whatever it was that Frank saw, whatever it was that he lived through in these last few months, it is now taking its toll on something deep inside him. The change may still seem outwardly imperceptible—his understatement about “keeping my good humor” notwithstanding—but it is beginning to slip out and leave telltale prints on his letters home. 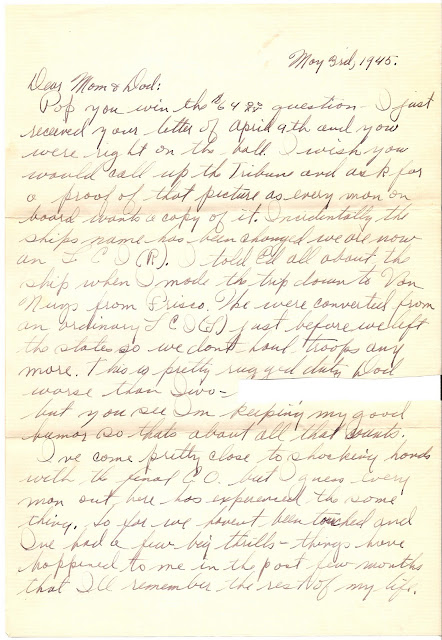 Pop you win the $64.00 question – I just received your letter of April 9th and you were right on the ball. I wish you would call up the Tribune and ask for a proof of that picture as every man on board wants a copy of it. Incidentally the ship’s name has been changed. We are now an LCI (R). I told Ed all about the ship when I made the trip down to Van Nuys from Frisco. We were converted from an ordinary LCI (L) just before we left the states so we don’t haul troops any more. This is pretty rugged duty Dad, worse than Iwo –...but you see I’m keeping my good humor so that’s about all that counts.
I’ve come pretty close to shaking hands with the final C.O. but I guess every man out here has experienced the same thing. So far we haven’t been touched and I’ve had a few big thrills – things have happened to me in the past few months that I’ll remember the rest of my life.
© Copyright 2011 – 2020 by Jacqi Stevens at 2:41:00 AM