A Long Letter Meets the Censor

As Frank Stevens continues what turns out to be an uncustomarily long letter, he realizes that perhaps not all of what he wrote that May in 1945 will make it home to his folks in Chicago. He evokes the specter of the ship’s censor, Ensign Jerome Kaplan, grinding his molars. Whether those molars met such a gnashing fate is unknown; however, the fate of his letter was obvious, once it reached William and Agnes Tully Stevens, by all the lines snipped from Frank’s four newsy pages. The gaps only leave us to wonder what happened after that first “stiff invasion” when Frank must have met some sort of challenging action—or what happened to the other ship he alluded to, or what atrocities prompted such a strong reaction.
Frank is keen on getting a copy of a picture of his ship, LCI(R) 707, which must have run in the Chicago Tribune, tempting me to take a whirl through the paper’s archives for those months in search of the item, myself.
The mention of the censor’s name reminds me that I do have a list naming all those who served on this vessel along with Frank. Though so few from this time period are still with us, it makes me wonder if any of these other men’s families might have any corresponding material from the time they all served together with Frank—do any of those wartime relics name names as this letter does? 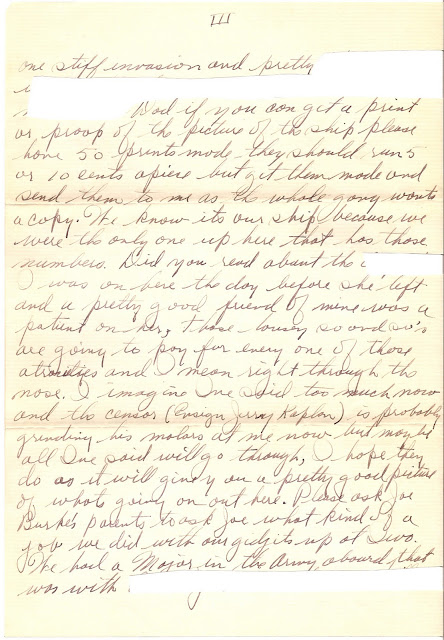 Dad if you can get a print or proof of the picture of the ship please have 50 prints made. They should run 5 or 10 cents apiece but get them made and send them to me as the whole gang wants a copy. We know it’s our ship because we were the only one up here that has those numbers.
Did you read about the [censor cut out a few words here]…I was on here the day before she left and a pretty good friend of mine was a patient on her. Those lousy so and so’s are going to pay for every one of those atrocities and I mean right through the nose. I imagine I’ve said too much now and the censor (Ensign Jerry Kaplan) is probably grinding his molars at me now but maybe all I’ve said will go through. I hope they do as it will give you a pretty good picture of what’s going on out here. Please ask Joe Burke’s parents to ask Joe what kind of a job we did with our gidgits up at Iwo.
© Copyright 2011 – 2020 by Jacqi Stevens at 2:57:00 AM