In seeking an ancestor who is leading the researcher on a merry chase, my initial tendency is to look at where we can first find him. In the case of my paternal grandfather, that is not so easily done. His first appearance was in the 1905 New York State census in the borough of New York City known as Brooklyn. At that point, he just happened to be living in the household of his father-in-law, an only slightly less aggravating ancestor to research. 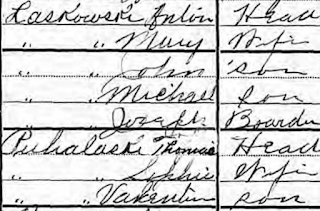 There he was, although listed under a surname spelled Puhalaski and—why stop at one error?—re-entered under the "corrected" given name of Thomas. Still, the inclusion of his wife, Sophie, and his four month old son—that would be my father—helped tip the scales in our favor when combined with the Anton Laskowski household.

Jumping forward to the 1910 federal census would allay any concerns about those household listings—Theodore, then listed correctly, was still in the Laskowski household in Brooklyn, along with his wife Sophie and, by then, their two children, just as I've always known the family constellation to be. But the point of today's exploration is to see how far back in time I can go and still find any listing of Mister Mystery, Theodore Puhalski. Answer: not far, as it turns out.

If, instead of looking ahead to the 1910 census from that 1905 state census vantage point, we worked backwards in time, we could find my paternal grandmother's family alright, but no sign of Theodore. After all, he and Sophie were supposedly married in 1904, although I have yet to find any marriage record for the couple, despite diligent hand-cranking through microfilmed records of New York City marriages (yep, including every one of the boroughs, just in case).

There was another twist I needed to learn about, just to locate Sophie Laskowska's census entry for 1900, however. That was the fact that the family experimented with shortening their surname to sound less "foreign"—something I only learned when looking up my grandmother's obituary, where her younger brother Michael was listed under that shortened version. The entry for the entire Laskowski family in the 1900 census was under the surname Lasko.

Going back before that point, the only other census in which I could find the Laskowski family was in the New York State enumeration of 1892—thankfully! Before then, the 1880 census would have done me no good; the Laskowskis did not arrive in New York until after that point.

But where was Theodore Puhalski? The Laskowskis had other young men staying with them in the 1905 and 1892 enumerations, but even looking over the entire page where their household was entered, I saw no sign of any family with a surname spelled either Puhalski or Puchalski, the two variants I've already found.

It might have been a stretch, but I even recalled that early photos of my father and his family included one with a woman called "Aunt Rose." On my grandfather's death certificate—a document deserving a wary eye in attempts to use it as a genealogical guide—his mother's maiden name was given as Anna Krouse. I did discover there was a woman named Rose whose mother had that very name (although spelled Krauss), but you know I've already attempted every research contortion I could conjure up, without any results.

And so, the best I've been left with is the earliest mention of Theodore Puhalski's name in the 1905 New York State census record, when he was said to have been an alien of twenty nine years of age. With no discoverable marriage record, no appearance in earlier census records, no passenger records providing his date of arrival on American shores (despite his declaration on his naturalization papers giving a date), the man was basically swallowed up in history.

...until. Until a few DNA matches showed up which didn't seem to connect with my Laskowski side. They seemed to have something in common—all, for instance, arising from an immigrant who arrived not in New York but in Wisconsin, of all places. With no paper trail to follow into the past from my grandfather's life story, perhaps this would be the way to learn just who the man really was, and where he came from.
© Copyright 2011 – 2021 by Jacqi Stevens at 2:48:00 AM