Those Little Details
That Make a Difference


I'm still trudging, mind-numbing detail by detail, through the proof of why I believe my husband's Tully line ends up with immigrant ancestors Denis Tully and Margaret Flannery instead of Dennis Tully and Margaret Hurley. Despite what the government documents indicate for each Tully line—that of my husband as opposed to that of his DNA match—I do have a trump card in my back pocket. That was, in fact, what originally clinched the maiden name conclusion for me, years ago.

You see, Agnes Tully Stevens was a pack rat. It wasn't really her fault, of course; her mother was a pack rat, as well. And even she inherited that tendency from her own mother.

The result, for me, has yielded a rich trove of genealogical clues, for which I gratefully went, page by page and scrap by scrap, through the emptied drawers of Agnes' son Ed, the one who inherited the Tully family history mantle—and seemed to keep it just as he had received it, up until the point of his own death.

Among those personal effects was one particularly unremarkable piece of what looked like crumpled, yellowed paper. Written on that page was the note of a church official in "Ballina Killaloe Co Clare" certifying the baptism of John Tully. Church records being church records, that slip of paper also happened to include his parents' names: Denis Tully and Margaret Flannery.

Of course, that could be a fluke, or the coincidental record of another John Tully. How was I to know that this pertained to our John Tully—other than the fact that it had been hoarded in a bedroom drawer in our family for generations.

The delicious confirmation that it was, indeed, a record pertaining to our John Tully came through the help of a distant cousin—a descendant of the older sister in that Tully household listed in the 1852 Paris, Ontario, census record. In a story I shared several years ago, this distant cousin—also going through his now-deceased father's drawers full of family papers—produced a similar note for his own ancestor. Other than changing the name of the child being baptized and her sponsors' listing, the wording was exactly the same—including that vital detail about her mother's maiden name.

So, while I didn't obtain that record through any official means—other than the luck of having pack rats for ancestors—I do have two versions of a confirmation that our Tully matriarch was indeed Margaret Flannery, not Margaret Hurley.

Don't be in any rush to toss this DNA match out the window, though. The beauty of mulling over these mind-numbing details, over and over again, is that aberrations do make themselves known. Eventually. And I think I spotted a possibility of how to explain the root of our discrepancy. 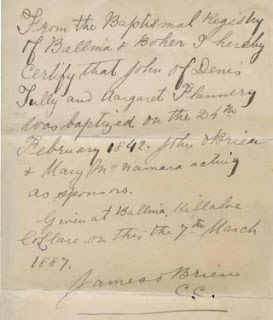 Above: The verification of John Tully's 24 February 1842 baptism in the registry at the Catholic church in Ballina, County Tipperary, Ireland, from the personal papers of his grandson, as passed to the author in 2011.