Off the Shelf: A Faithful Heart


Finally, finally, I'm opening the cover of the book that includes many mentions of my Broyles ancestors from Anderson County, South Carolina. It's been almost two months since reader Lisa mentioned the title in a comment here. True, it takes a while for books to be ordered and delivered. Then put in line behind other books that need to be read. And, well, cleared from other obligations, conferences, travel plans and...and...and...

So I make a date with myself to go out for coffee. And bring my book. Sometimes, I also invite my husband to come along; after all, he likewise has a tower of books he really means to read. Or, I'll invite my daughter, now that her teaching schedule has modulated to a dull roar rather than its frenetic full speed jet whine.

The point, of course, is to get some reading done. Isolating a specific spot and a delineated time slot seems to help. And bringing along a book I've been yearning to read is the bonus.

That book, lately, has been A Faithful Heart; The Journals of Emmala Reed, 1865 and 1866. As Lisa has already mentioned, Emmala's journal was full of mentions of the Ozey Broyles family, particularly my third great-grandfather Dr. Ozey's son Robert, whom Emmala considered her childhood sweetheart.

The book's editor, Robert T. Oliver, fills in the many blanks by providing biographical context and historical setting for the Reed journals, for which I am thankful. Not only was Emmala smitten with the young Robert Broyles, but her family was next-door neighbors to the Broyleses. Furthermore, upon realizing the surname of the diarist was Reed, I had wondered whether she was related to the Broyles family through Ozey's mother, whose maiden name was also Reed. (While I am far from finishing the book, I have already uncovered a relationship between the families, but it was not the connection I had assumed it was.)

I particularly value the editorial comments by Robert Oliver, who explained how the journals were found (at a garage sale), why they are so significant historically, and the particular challenges he had to undergo to transcribe them. The rarity of these journals is, in part, owing to the fact that while other diarists concluded their writings at the close of the Civil War, Emmala took up her task at that point, and continued it through the difficult historical period of Reconstruction. Due to the economic pressures increasingly experienced in the south post-war—yet running head-on into the result of that pressure in Emmala's apparent personal need to pour out her anguish on paper—this young woman resolved her dilemma of running out of paper supplies by "cross hatching" her writing. In other words, when she ran out of paper, rather than discontinuing her habit of journaling her daily life, she simply flipped the pages sideways and wrote perpendicularly to her original entries.

As I read through this book, of course the journal entries of Emmala Reed will be most pertinent to my own pursuit of the Broyles family's story. In addition, though, the editorial content will provide a broader perspective to the changing times in that region following the Civil War, something I'm already trying to absorb. Better yet, I've discovered that this book is only one of a series of books called Women's Diaries and Letters of the South, put out by the University of South Carolina Press. Since I'm discovering that the most telling documentation of the social mores of the times seem to be what is revealed in letters and diaries of these very women, I will be perusing the list for other titles to read in this series, as well.

But first, there's a coffee date with a list of books I've promised myself to read. After Emmala's story, there are others... 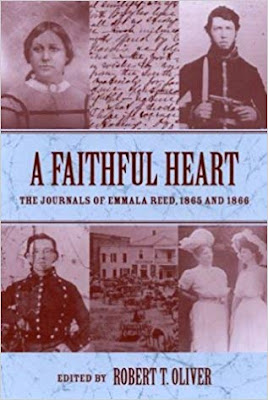 Above: Cover to the book, A Faithful Heart, containing the journals of Emmala Reed. Strangely, though the ISBN on this cover, obtained through Amazon.com, matches the number on my copy of the book, the photos featured on three of the four corners are displayed in reverse of my copy's images. Hopefully, nothing from my copy is omitted from the most up to date copy of this book; I don't want to miss one iota of the details I'm sure to find in Emmala's journals.
© Copyright 2011 – 2021 by Jacqi Stevens at 2:48:00 AM