When I was a kid, I was a fanatical tomboy. Tree climbing was my forte. I discovered, in my pre-teen years, that the trees in my backyard were planted close enough—or had grown sufficiently intertwined—to allow me to walk from tree to tree without ever setting foot on the ground. With some well-calculated swings and leaps, I could transport myself along simply by using the branches.

Now that I'm climbing through an entirely different kind of tree, I find myself using that nifty trick once again. Stuck with lack of trees for my DNA matches? It's time to go tree hopping. In fact, it's time to swing through the trees at several tree-hosting sites. Why stop at one? Especially considering the main roadblock in comparing DNA matches: everyone loves to discover their ethnicity report, but seldom tackles the follow-through of posting their tree on the site where they obtained their DNA results. 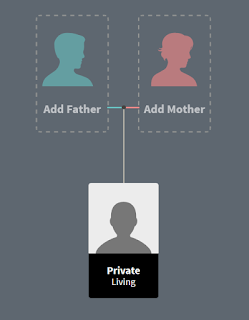 When faced with such impossible challenges, how are we to determine the way we are connected to our DNA matches?

Fortunately, though the trees of some of my key matches are rather enigmatic—though not usually as extreme as the example above—I have a wide variety of resources, thanks to having test results posted at all five of the major companies focused on genetic genealogy. Some of my matches do, too. While their tree may not be complete at any one of those companies, they may have a better version posted elsewhere. I certainly have followed that formula, too, preferring the tree building system at Ancestry over those at other companies.

Besides knowing to look for my matches at multiple companies, I also have learned to search for the ancestors of those promising matches at other websites. For instance, while I find the AutoClusters tool to be invaluable, I don't much take a shine to the tree building program at MyHeritage. If I look at a match's tree on that website and (understandably) find it just as weak an offering as my own shriveled tree there, I'll go hunting elsewhere for the target ancestor from my match's tree.

In the case I'm currently tackling, MyHeritage's AutoCluster tool has pointed me to one cluster which seems to represent relatives affiliated with the mystery family of my paternal grandfather's origin. Keep in mind that I know next to nothing about my grandfather; if it weren't for concerted effort by cousins and other kindly but distant relatives, I wouldn't even have known he ditched his decidedly Polish-sounding name for an Irish model, well into adulthood in New York City. So locating four DNA matches which seem to connect to that paternal line is a big deal for me.

The problem is that most of those matches are at the range of third to fourth cousin. And that line in my tree drops off precipitously at the mere level of grandfather. My matches' trees don't reach much farther. How, then, do we make any connection? After all, to find the Most Recent Common Ancestor for a third cousin requires at least knowing the details about each match's second-great grandparents.

The answer comes by seeking out other trees which extend the branch even further than our match had done. This is quite easily accomplished at Ancestry.com, especially among researchers willing to add more than just their direct line ancestors. It is among the branches of those siblings' spouses that I often find the information I'm needing on the common ancestor.

Right now, I'm trying to figure out how one branch of the Puchalski family—if that indeed was my grandfather's real name, and not just another alias he picked up—ended up in Milwaukee, Wisconsin, when my family was decidedly a bunch of New Yorkers. I'm getting several other matches at other testing companies which also resonate with that Milwaukee connection, so I know this cannot be a fluke. It's just that we all have a couple more generations to push back before we can isolate the answer to our joint family history connection.

Before we get to that point, though, it would be a good idea to start at the beginning of the story: just how I and my cousins came to discover that our family name wasn't really Irish, after all.
© Copyright 2011 – 2021 by Jacqi Stevens at 2:47:00 AM