Nota [Not So] Bene


A genealogist is not likely to take news of an impending brick wall easily. In fact, I've been turning every which way, examining record possibilities, struggling to escape the verdict: realizing there was no easy explanation—or convenient documentation—for the other Dennis Tully I'm now pursuing.

Those record possibilities seem to be conspiring against me, however. Hoping to find a baptismal record in the home parish my husband's Denis Tully left in County Tipperary, Ireland, I was sorely disappointed to find the baptism records for Ballina started with March of 1832—about two years too late to include that other Dennis Tully, if his later reports of his age were correct. Turn the page from March 1832 to see what was on the previous page, and you get launched into marriages from the 1870s. What happened to baptisms from 1831? Or, more to my point, 1830?

Not finding any success in Irish baptismal records, I changed my tactics to focus on Ontario, Canada—home of those Irish Tully immigrants. I scoured each of the baptismal records and marriage certificates I could find for the children of Dennis Tully and Margaret Hurley, hoping for at least one church or civil official to slip and make the mistake of entering the town in Ireland where this family originated.

While I never found such an error—though I have in other instances over the years—I did work my way back through the parish records in Ontario where the Tully family had settled. Mind you, the only detail I can figure out from the family history of this other Dennis Tully and his bride, Margaret Hurley, is that they must have married in Ontario, rather than Ireland—and that the date of that event was likely about nine months off from the arrival of their eldest, a daughter they named Bridget, who arrived sometime in 1857.

Browsing through the baptismal records, I encountered this heart-stopper:


N. B., of course, being the abbreviation for the Latin phrase, nota bene, is translated as "note well." Well, I see very little which I'd like to note well in such a discovery! While it may seem like a trifling matter of barely over two years' worth of records, if the span of those dates includes the very document of your ancestor, it can be quite troubling. Gone is just that: no recourse for the researcher.

Perhaps I should be grateful that at least a priest took the time to spare me a fruitless search, myself. But I can recognize the end of the line when I see it. I decided to move on to other approaches.

In the meanwhile, I revisited an old Irish website I had found several years ago, one which contained transcriptions of Irish Catholic baptismal and marriage records predating the digitization and availability of these records online. The website is one I originally accessed through the Flannery Clan website, and focuses on those records specifically containing the surname Flannery.

I used the dates on those transcriptions to lead me to the original records of each Tully-Flannery child's baptism, and discovered there were other children I had missed in our Denis Tully's family: an earlier son named William who was born in 1839, and a daughter named Hanora who was born in 1847. It is likely that each of these children died young, given both that their names were not carried over into the household upon the Tully family's arrival in Ontario before 1850, and that the parents subsequently chose the name William to give to their youngest son, born in 1850 in Ontario.

Unfortunately, none of those names I found in the baptismal record were actually named Dennis. Remember, the records—and thus their transcriptions—are not available before 1832, and this Dennis likely was born around 1830.

How easy it would have been if I had found a baptismal record for the younger Dennis. Conveniently, it would have listed not only his father's name, but his mother's maiden name and the sponsors for this infant as well, possibly providing hints as to the names of extended family members. True, I can infer from the other Tully, Flannery, and even Hurley records there in County Tipperary about any connections to the larger family relationships. But they'd only be guesses without any further documentation to back up these conjectures.

This brings up an oft-bemoaned condition faced by researchers of their Irish roots: that there is only so much that can be found by relying on governmental or even church records. And in this case of the two Tullys—Dennis and Denis—there is apparently nothing available before the spring of 1832. 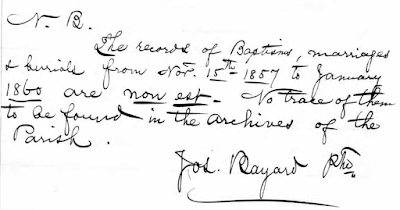 Above: Note found among the church records for the baptisms, marriages, and burials in Sarnia, Ontario, where Dennis and Margaret (Hurley) Tully settled after moving from the nearby town of Paris.
© Copyright 2011 – 2021 by Jacqi Stevens at 2:48:00 AM