What's Missing From the Picture


The more I mull over the obvious discrepancies between my husband's Tully family tree and that of his new Tully DNA match, there's one glaring piece of the puzzle missing from this picture: the hard copies of documentation for the many members of my husband's extended family.

Now, don't think I never obtained those verifications. I do have them. The problem is that I obtained them long before there was an Internet—and certainly long before we had genealogy software for building family trees via our computers. These are not those handy digitized copies we can instantly download from FamilySearch.org or Ancestry.com. They are the kind of paper relics of an earlier age of genealogical research—the stone age of SASE and interminable waits for letters of reply from far-flung county clerks.

And they were all duly filed in notebooks and stashed in storage. You know: Boxes I Never Look At.

In such boxes were the likes of death certificates stating the place of birth of each distant cousin's parents, and the even more sought-after maiden names of mothers. These were the forms I resorted to when trying to pinpoint the migration pathway from Ireland to Chicago—the missing link being any solid proof of transportation across a formidable body of water.

It took a lot of looking through records of many cousins before I could ascertain that the previous stopping point before the Tully family arrived in Chicago might have been this tiny place called Paris. In fact, I believe one government official had a hard time conceding that there might even be another Paris besides the one in France (which threw me off my research path momentarily, as well).

In the end, those documents led me to the conclusion that the Tully family had moved through Paris before the younger generation of the family—for my husband's side of the family, that would be John, his great-grandfather—continued on to Detroit and then Chicago.

What such a tedious search yielded me, in the long run, was not only a bushier family tree, but also many profitable research connections. When my husband gets a Tully DNA match, I often already have that name as a descendant in my Tully tree. Along with that serendipity comes email contacts and sometimes even mailing addresses—in one case, even a visit over lunch with some third cousins, confirming a previously unknown son among the founding immigrant Denis Tully's many children. And these connections even yielded the gift of some Tully family photos from around the turn of the century—pre- and post-1900—which further confirmed connections.

Those connections included some Canadian family members whom I still cannot identify—like the Tully member who somehow connected with a McCabe family, and another who was apparently related to someone living in Hamilton, Ontario. The tempting detail about this new Tully DNA match—besides his connection to Paris in Ontario—is that his tree includes a Tully woman who married a McCabe.

So it's back to my research log to check all the details once again. I need to retrace my steps, all the way back to the beginning of the Tully research saga, which means checking the work of more decades of research than I care to consider.

Normally, that research log would be resident in my online tree. I am careful to include every bit of documentation I can—now that I'm working on this family history online—on the center column of my Ancestry.com tree for the Tully family. I even call that column my "footnote column"—that's just how I see that middle column.

The answer to that dilemma can mean only one thing: dig out those old files and boxes, and scan all those old death certificates and other records and attach the digitized graphic to my tree. That way, who cares what musty corner of my garage becomes home to those original records; I'll have them at my fingertips online. After all, that's what computers are for, isn't it? 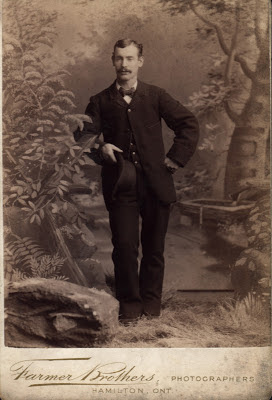 Above: Photograph from the private collection of a distant Tully cousin features an unnamed young man posing at the Farmer Brothers Photographers in Hamilton, Ontario; perhaps this new DNA match will lead to some clues about this subject's identity.
© Copyright 2011 – 2021 by Jacqi Stevens at 2:52:00 AM