The Unexpected Upheavals of Life

The photograph of Aunt Rose, in her fanciful pose with my father’s family, may have represented a particularly pleasing episode in her life. If my guess of the picture’s date as 1915 is accurate, it was about the time she married George Kober, a New York City postal employee.

George was evidently successful at his post, for future census records documented his promotion at work. His was a modest but pleasant home in one of the more suburban-looking neighborhoods of Queens Borough in New York City, valued, according to the 1930 census, at $8,000.

The Woodhaven, New York, Kober address was also home to George’s mother-in-law, listed in the 1920 census as Anna Krouse. This was not the only year I had found Anna and Rose listed together in a census record. Though the Kobers were married in 1915, the New York State census was evidently taken before the date of their marriage. At that point, however, Rose was still living with her mother—though I had to search in Brooklyn, to the south of Queens borough, to find them.

Pondering whether Rose’s surname of Miller was a name from a previous marriage or whether Anna had been the one to marry again, I found one detail in the 1915 census which might confirm the former. In that record, both women were listed as born in Germany. One—Anna—was entered as being an alien. The other—Rose—was listed as a citizen. Both declared they had been in this country for thirty years. Rose’s citizenship likely was owing to marriage to an American—though, of course, I’ll need documentation to be certain.

This possibility meant that Rose, aged thirty nine by the time of this census, was either already divorced—an unlikely scenario in that era—or widowed.

That, however, was the snapshot of her life on the date the census was taken, June first, 1915. By November, life became quite different. By then, Rose and George had married, and Rose and her mother moved into the Kober home on 96th Street in Woodhaven.

One hardly had time to breathe a sigh of relief for the two widow women, though. For the longest time, I had not been able to find Anna in the 1930 census—not to mention, I couldn’t find any of the three in the 1925 state census. Yet, though Anna would have been eighty two by the time of the 1930 census, I could not find any documented reason why she was not at her place in the household at that later enumeration.

That is where going back to retrace those research steps at a later date can help. This time, rather than search for the assumed death record, I perused the local newspapers for any mention of the family. That is how I found this tiny, but tragic, entry in The Brooklyn Standard Union from Thursday, September 29, 1921. 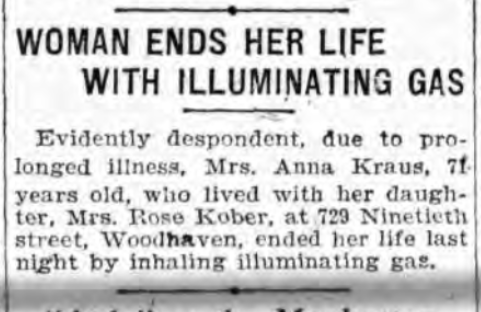