The Splat on the Proverbial Brick Wall

Is there any wiggle room, pressed hard up against the genealogical brick wall? That’s what I’m about to find out. Hopefully, this inquiry will deliver me to the felicitous date when the National Library of Ireland releases its digitized version of Irish Catholic Church records to the virtual world, supplying me with a fresh supply of potential documentation to build my case about my husband's Irish ancestry.

I’m not so sure, though. The current promised release date for the digitization project is July 8. And we haven’t yet escaped the clutches of May. That would make for a pretty long wiggle.

When I last left researching my husband’s Irish family lines, we had concluded a wonderful—yet exhausting—research trip to counties Cork, Tipperary, and Kerry leading up to a week at the books in Dublin. Once home, I had transcribed and muddled over my nearly-illegible notes, taken in utter haste during that three week trip. (Three weeks may seem like a lot for time on the road, but when it comes to searching for genealogical records, it never seems to be enough time.)

That I was bumping into a brick wall of time-restricted availability of records was not lost on me. Not only were we limited by our time in Ireland—those precious few days in that three week period—but we were also confined by the limitations of what was available on Catholic families living in that former realm of the United Kingdom.

It did, indeed, feel as if I had gone “splat” on that brick wall.

It is amazing how one phone call can resurrect hopes. And just one week ago, that is exactly what happened. Now, I’m re-entering the sharing stage with a distant cousin, eager to compare notes on our mutual family’s history. All we have to go on, really, are a few hand-written notes stowed in keepsake boxes passed down through the generations. We may have some of the very few written remembrances of those family members. The wonder is that they corroborate each other.

The person on the other end of the phone last week is the sister of the third cousin who shared baptismal records for Johanna Tully Ryan. Those, if you recall from this old post, aligned with the baptismal note we subsequently found for my husband’s great-grandfather, John Tully. Of course, there are more items to compare, which is what our upcoming project will likely entail.

That is what launched me on a new course of inspection: wondering just how my progress has been going on the autosomal DNA testing for my husband’s family.

When I subscribed to Ancestry.com, I decided that, rather than recreate the same family tree I have resident on my desktop program, I would separate out each of our parents’ surnames. Thus, I now have four separate family trees on Ancestry, one representing the family tree of each of our four parents. Comparing them to my husband’s DNA results will be somewhat of a problem, as I don’t have any handy devices—like my half-brother’s DNA results on my side—to separate out the maternal from the paternal. So, while I can track my progress on each tree—Stevens or Flowers on my husband’s side—I can’t separate the count through his DNA results.

With that caveat, here is where we stand at this re-beginning. The Stevens tree, itself, now holds 768 individuals, mostly within the last five generations—including, as I’ve discovered to be helpful when examining autosomal DNA results, as many of the siblings of each generation as possible plus their descendants.

In contrast, my husband’s maternal tree includes 967 people. Perhaps that difference is owing to the fact that, though she assumed her family had “just gotten off the boat” a few generations back, my mother-in-law’s family came to the United States before the beginning of the 1800s. Often, the longer an immigrant was resident in this country, the easier it is to press backward through the generations with viable documentation.

That, perhaps, is why, of my husband’s 462 autosomal DNA test matches, the only two confirmed relationships belong to descendants on his maternal side.

While it will be tempting, now that I’m re-opening the possibilities of revisiting past progress on my husband’s lines, to go back and add more names on that easy-sailing maternal side, I need to maintain my focus on the Stevens side. While the going will be fraught with struggle—after all, I’m no better off, right now, than a bug splat on my windshield after a drive on the freeway—this is what needs to be pursued right now. Who knows what a cooperative cousin may bring to this adventure. 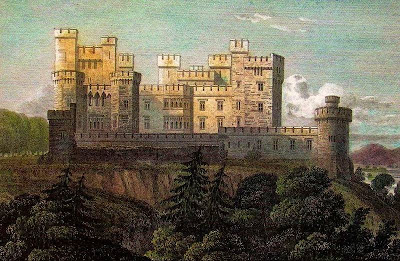 Above: Print of Mitchelstown Castle, County Cork, Ireland, originally published in 1820 in "Views of the Seats of Noblemen and Gentlemen, in England, Wales, Scotland and Ireland." Courtesy Wikipedia; in the public domain.
© Copyright 2011 – 2022 by Jacqi Stevens at 2:49:00 AM
Email ThisBlogThis!Share to TwitterShare to FacebookShare to Pinterest
Labels: DNA Testing, Stevens, Tully