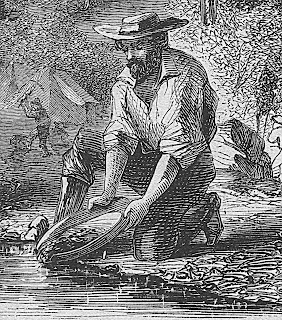 Did any of your ancestors fall for the lure of quick riches and respond to the call of the California gold rush? While very few of my ancestors did—I believe one distant Broyles cousin fell into that camp—there were thousands who passed through my current hometown on their way to seek fame and fortune in the foothills east of this inland port city.

Some of them—though only a wise few—eventually realized they stood a better chance at financial gain by profiting off the supplies or services they could render to those many other gold miners streaming through town on their way east to strike it rich. Those were the ones who settled around the port, becoming merchants or inn keepers or livery men or bankers to that throng of fortune seekers.

The town those “Forty Niners” passed through was known by various monikers during its early history. In addition to Mudville, it had been called Fat City and also Tuleburg—after the tule, a type of large bulrushes growing in the marshy lowlands surrounding the port and meandering rivers leading from the Sierras to the San Francisco Bay. But by July 23, 1850, when the city was incorporated, the name chosen became the one it is known by today: Stockton.

Stockton was designated as the county seat for one of California’s original counties, San Joaquin, created in 1850 as California attained statehood. At its formation, the entire county boasted a population of 3,647 people. By the time of the 1860 census, the city of Stockton, alone, held that many people; the county’s population had more than doubled to 9,435 people.

Fast forward to present times, and blend that time warp with a large population of people having an avid interest in genealogy and local history. Do you ever wonder what became of those first pioneers and families who chose to settle in Fat City and the surrounding areas, rather than head to those hills to strike it rich?

Our local genealogical society—of which I’m honored to be a part—has partnered with the county’s Historical Society to delve into that very question. We won’t be able to do it alone, though, so we’ve decided to take the crowdsourcing approach: invite direct descendants of those early settlers to share their families’ stories with us.

The San Joaquin Genealogical Society has launched its First Families Certificate Program, and is seeking applicants who can document their relationship to an ancestor living within San Joaquin County in any of three periods of county history:

In addition to the documentation required—similar to many lineage societies—we are inviting applicants to share photographs, stories and other memorabilia of their direct ancestors who once lived in San Joaquin County. Material submitted will form part of a collection housed at the San Joaquin County Historical Society which will be available to future researchers interested in the heritage of our earliest settlers.

As readers of A Family Tapestry, you have shared my research journeys and virtual quest to detail my own micro-history, set in the far-flung reaches of this country and beyond. Though I can’t claim any heritage vested in this county’s development, perhaps you can—or perhaps you know of someone else to whom you can pass along this brief announcement. You know our Society will appreciate any help you can provide in spreading the word as we launch this new certificate program.

For those interested, the Society has posted application forms and instructions on their blog here. While they have already had much interest in the program expressed locally, you know how it is with researching ancestors: those people who once lived in Stockton, California—or nearby cities of Lodi, Manteca, Tracy, Escalon, Lathrop and Ripon—may now have descendants whose homes are far, far away from the place once known as Mudville.

Perhaps you, too, once had a direct ancestor living in this inland California county. If so, consider yourself invited to share your ancestor’s story by applying for recognition as a descendant of one of the First Families of San Joaquin County.


Above: Drawing of a man panning for gold on the Mokelumne River in northern California, published as part of an 1860 article in Harper's Weekly, "How We Got Gold in California." Courtesy Wikipedia; in the public domain.
© Copyright 2011 – 2022 by Jacqi Stevens at 2:53:00 AM
Email ThisBlogThis!Share to TwitterShare to FacebookShare to Pinterest
Labels: California, Genealogical Organizations, Lineage Societies