Someone Did Want That Picture

When I first started writing A Family Tapestry, a seasoned blogger popped up out of nowhere and became not only my inspiration but a wonderful mentor, as well. Among her other online properties, one was a blog dedicated to the worthy mission—at least in genealogists’ eyes—to find and rescue abandoned old photographs and reunite them with family members.

While I was infinitely jealous of the fact that she was located in the far northern reaches of our country—in “Minnesnowda,” as she likes to call it—instead of being out and about, scouring the antique shops in the Southern hometowns of my ancestors, I was impressed with what she is accomplishing. To date, she has posted 1,914 rescued photographs on her blog and returned 118 of them to grateful family members.

Perhaps you already recognize, by this description, the accomplishments witnessed on the blog known as Forgotten Old Photos by the near-anonymous blogger who calls herself Far Side of Fifty. Perhaps you, too, have learned a lot about the photographs of the mid to late 1800s and beyond, just by following her daily posts and watching the scramble as readers attempt to identify living family members of her mystery photograph subjects.

Granted, having a subscriber base well over 1700 helps the reunification process—yet another aspect about which I must confess harboring feelings of envy. Sometimes, in struggling over the photographs left behind by my own family’s ancestors, I wish I could just hand the pictures over to Far Side and let her choreograph the magic that occurs on her site with such regularity.

However, I am me, and she is, well, phenomenal. I can only hope to someday achieve a smidgeon of that reunification success rate.

Last night, though, I received a comment on A Family Tapestry that made me perk up and renew that dream of becoming Far Side’s “Mini Me.” The note was concerning a post from June, 2013—about a photograph from the mostly-unlabeled Bean family collection that I never could just bring myself to throw away.

“Someone might want this picture” would be the thought going through my mind, every time I sternly lectured myself on the foolishness of keeping that hopeless collection of faces from my now-long-deceased first husband’s grandfather’s siblings. But I guess I had a soft spot in my heart for the crotchety Aunt Leona and Uncle Bill. And the photographs stayed on in the old box I received them in after their passing, back in the 1980s.

You can imagine how I perked up when this note came through my email inbox:

Hi. This is my grandfather, Leo Walter Harrington from Tonapol.

The message went on to read,

My grandfather went to Stanford and studied law. He was born on October 15th, 1896.

That year—1896—was the same year Bill Bean was born in Redwood City, California, not far from Palo Alto, where the Bean family later lived and in which Stanford University is located. Though I have yet to find out how Bill met Leo Harrington, perhaps now I will have a chance to learn—and, of course, like my inspiration, Far Side of Forgotten Old Photos, to return the photograph of a young Leo Walter Harrington to a family member who might like to have it. 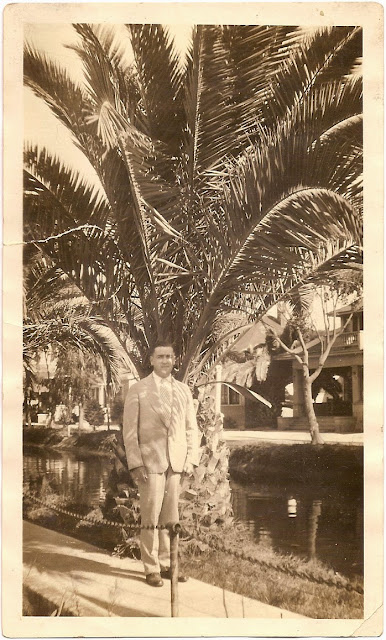 © Copyright 2011 – 2022 by Jacqi Stevens at 2:54:00 AM
Email ThisBlogThis!Share to TwitterShare to FacebookShare to Pinterest
Labels: Bean, Blog Recommendations, Unidentified Places