What could have occurred, leading up to the year 1915 in metropolitan New York, to convince a German immigrant that he needed to disguise his identity?

That’s a question I’ve asked myself, over and over, as I ponder the possible reasons why my paternal grandfather might have disappeared from his Brooklyn home after 1910 and re-invented himself as an Irish-American citizen in Queens by 1915.

Of course, the key assumption embedded in that question is the proviso, if. If, that is, it was the same man, once known as Theodore J. Puhalski, who now materialized—along with Theodore’s family—as John T. McCann.

After wearing the search paths thin, pursuing any clues via surnames and addresses, it was time to step back from the computer and think this thing out holistically. Take in the big picture. Consider what hints history could provide for motivations.

Though America’s entry into World War One was not yet on the horizon, even in 1915, the fact that we are talking about a man of German origin was not lost upon me. Depending on where one lived and where we were in the overarching timeline of current events, hostilities toward those aliens in our country with a German nativity were either simmering or outright exploding on the scene. It might not have been a good time to go public with one’s heritage. Perhaps that was the impetus for the family story about having to change their identity to allow their father to obtain a job.

With a scenario like that insinuating itself upon my wild imagination, I dreamed up all sorts of brick wall possibilities. Was Theodore Puhalski a German spy? A draft dodger?

The timeline for the World War started—at least for those located in Europe—in 1914. While that could have influenced Theodore’s decision to re-invent himself (if that is what, indeed, happened), the pacifist mood fostered in American political circles likely didn’t provide enough immediate pressure for a German in America to be that forward-thinking. However, the news from Europe, coupled with the possibility that he hadn’t complied with proper naturalization procedures, might have impelled him to realize he would have to either provide himself with the necessary documentation, or disappear into the mass of humanity which was New York City.

This, indeed, was do-able. Especially if Theodore had arrived in America at as young an age as some of his self-reported arrival dates indicated, he could have grown up without the slightest trace of any giveaway speech traits other than a Brooklyn accent.

Things changed rapidly in this war timeline, though. The United States was drawn into the European conflict by 1917. With Congress passing the Selective Service Act of 1917, the nation quickly mobilized and sent wave after wave of military personnel across the ocean. Yet, Theodore would have been classified in Class IV: married registrants with dependent spouse and children with insufficient family income if drafted. However, while he would have been exempted, that would not have eliminated the requirement for him to have registered for the draft.

Complicating matters—at least at the point when I first started re-thinking my research predicament—was the fact that I could not locate a draft registration card for either Theodore Puhalski or John T. McCann. Admittedly, ascertaining whether I had found the document for the right John McCann was a challenge, but as of last week, I hadn’t even located any solid possibilities.

Though lack of any such discovery powered wild speculations on my part, as it turned out, missing documentation was not owing to negligence—or outright refusal—on the part of anyone back in 1917. Rather, it proved to be a case of indexing complications. Search results finally yielded an entry filed under John L. McCann when I looked last week, though prior to that, nothing at all had surfaced. 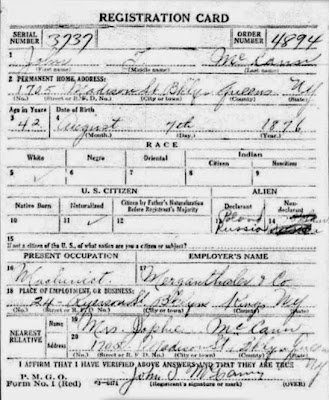 Finding the document, using the birth date I had located via other documents—August 7, 1876—helped confirm that I had the right John McCann. Though the handwriting made his wife’s name look like “Jophie,” the telltale clue about his place of employment—Mergenthaler—clinched it for me. So our John McCann had, indeed, complied with the requirements of the Selective Service Act.

But what about Theodore Puhalski? Was there a draft registration card for him as well?

None that I could see—at least in searches up to this point. Perhaps, just as had happened when seeking the card for John McCann, it will take time to sift through all the records to find one for Theodore, hidden among those mounds of data.

However, if Theodore and John were one and the same person, Theodore’s plan to morph into a less-egregious American alien before the war’s pressures mounted to the level of mandatory draft would have succeeded.

Yet, I still have to wonder: did he do it by sheer dint of will and impersonation skills? Or did he have the foresight to secure the proper documentation to make the switch?

That was the record I had yet to uncover.


Above: World War I Draft Registration Card for John T. McCann, courtesy of Ancestry.com.
© Copyright 2011 – 2022 by Jacqi Stevens at 2:49:00 AM
Email ThisBlogThis!Share to TwitterShare to FacebookShare to Pinterest
Labels: Brooklyn NY, Documentation, Getting the Big Picture, McCann, Puchalski/Puhalski, Wars