Since I mentioned, yesterday, the value of gleaning family history stories from old genealogy books, I can’t leave this topic without bringing up an auxiliary point: that of the stories that can be found via newspapers.

Granted, the most important point in writing one’s genealogy is to insure accuracy on the details of names, lines of descent, dates and places. Beyond that genealogy, though, are the details that put flesh and blood to those dry bones of history. While some people are fortunate enough to find such tidbits via books of bygone generations, not everyone can claim that opportunity.

There is, however, another resource—one that I simply couldn’t bypass without spending at least a day’s consideration. That is the resource of newspaper publications—both historic and more recent.

With the exception of the common day laborer ancestor who made the unfortunate choice of living among the teeming millions in urban centers such as New York—the reason why my paternal side likely never gained any column inches in the annals of the New York Times—many of your distant relatives may have shown up in surprising places in the newspapers of their hometowns. Whether in the details of a mournful—but extensive—obituary, or in passing mention of who their guests were for a fried chicken dinner on a lazy Sunday afternoon, your ancestors are there, just waiting to be rediscovered in the pages of historic newspapers.

Sometimes, too, just as history repeats itself, so do the historic stories run in newspaper articles.

Take Benjamin Taliaferro, the older brother—and arch-rival in romance—of my fourth great grandfather, Zachariah Taliaferro. His move from the family’s home in Virginia to the rugged land of up-country Georgia after the Revolutionary War had caught my eye when I was considering what might have been the cause of later Taliaferro generations’ similar move. “Why Georgia?” can be answered by some of the newspaper articles found in search of the bigger picture of Benjamin’s life story.

The earlier newspaper articles provide details as they unfolded during his life. Benjamin, likely born in 1750, was reported to have moved to Georgia by 1784. After a rich and active life of service to his fellow Georgians, Benjamin resigned his position due to a lingering illness, which eventually claimed his life in 1821.

Here’s how the details played out in newspaper discoveries, thanks to collections available at various online repositories.

His Excellency the Governor has appointed the Honorable Benjamin Taliaferro, Esq. Major-General of the third division of the militia of this state.

An entry in the June 10, 1797 Chronicle shows Benjamin Taliaferro in action—in whatever untitled role he was fulfilling—with a collection of legal notices. The heading requests

The article continues with several announcements of court cases from various Georgia counties, all commencing, “The State, vs.” and entering the accused’s name and several paragraphs of the charges.

As Benjamin Taliaferro served as both a state legislator and a United States congressman, of course there were several newspaper articles detailing his service. For a thorough search, I’d capture all the details for a family history. I won’t recount them all here—but if this were your family, wouldn’t you want to find such details?

A later article in the Chronicle, for instance, mentioned on November 15, 1800,

On the 27th ult. his excellency the governor issued his proclamation, notifying to James Jones and Benjamin Taliaferro, Esqrs. their having the highest number of votes for members to represent this state in the house of representatives of the United States, that they may signify their acceptance or refusal of their appointments, and adduce the requisites and qualifications required by law.

As it turned out, due to illness, Benjamin later had to resign that seat. The Georgia Gazette in Savannah published the legal announcement that shows the then-current requirements for such an occurrence. From the March 11, 1802, edition:

By His Excellency JOSIAH TATTNALL junior, Governor and Commander in Chief of the Army and Navy of this State, and of the Militia thereof,
A    P R O C L A M A T I O N.
Whereas Benjamin Taliaferro, Esq. one of the Representatives of this State in the Congress of the United States, hath resigned his seat as a member thereof: And Whereas, in and by an act to regulate the general elections in this state, and to appoint the time of the meeting of the General Assembly, passed the 11th day of February, 1799, it is, among other things, declared, “That all writs of elections to fill vacancies that may happen for Members of the General Assembly of this State, or House of Representatives of the United States, shall be directed to the Justices of the Inferior Courts of the respective counties…” I have therefore thought fit to issue this my proclamation, notifying, directing, and ordering, the respective Justices of the Inferior Courts of this state to consider this my proclamation as a general writ of election, for the purpose of filling the vacancy of a Member in the House of Representatives of the United States, in the room of the aforementioned Benjamin Taliaferro…
Given under my hand, and the great seal of the state, at the statehouse in Louisville, this 23rd day of February, in the year of our Lord 1802, and of the Independence of the United States of America the 26th.
JOSIAH TATTNALL jun.
By the Governor,
Horatio Marbury, Secretary of the State.
GOD SAVE THE STATE.

Though Benjamin resigned his seat due to illness, he lived almost twenty years beyond the point of his resignation. Even then, the newspapers told the story—though unfortunately, I didn’t locate the obituary itself—with a Chronicle advertisement on January 14, 1822.

Will be Sold,
At the late residence of Benjamin Taliaferro, deceased, in the county of Wilkinson and state of Georgia, the following property, to wit…

The advertisement detailed the two tracts of land being offered for sale, as well as supplies and household goods being sold to settle Benjamin’s estate. Affixed to the end of the notice were the names, Benjamin Taliaferro and Thornton Taliaferro, his two sons who likely served as executors.

Not only was the tale of his life told through the news reports of his era, but later articles recounted much more.

A July 30, 1937, article in the Macon Telegraph explained how Taliaferro County got its name—in honor of Benjamin—and reported that a local chapter of the D. A. R. had recently honored his memory with a commemorative marker at his grave site.

A lengthy February 16, 1966, article by Congressman Robert G. Stephens, published in the Augusta Chronicle, explained the history of how Taliaferro County received its name. The narrative included the congressman’s take on how the name came to be pronounced as it is.

Taliaferro County is one of the few Georgia counties whose name is consistently mispronounced by non-Georgians. As so frequently happens in our English language, they say the word as it looks and not as it is spoken, because it is spoken as if it were spelled “Tolliver.” In England, where they speak with a broad “a” they pronounced it years ago as we Georgians do today.

This article, it turns out, provides one explanation for why Benjamin, a Virginian native, decided to make Georgia his home state.

When the active phases of the Revolution shifted to the South, Taliaferro volunteered to join Gen. Daniel Morgan as a captain and like many of his fellow soldiers, he tramped the back-country of South Carolina and Georgia and saw it as the land of opportunity, tucking its desirable qualities away in his memory for future reference when hostilities were at an end…He returned to Virginia as a paroled officer and married Martha Meriwether, a neighbor of the family in Amherst County. Remembering the beautiful and fertile land in Georgia, hearing from other veterans of Georgia’s liberal policy in rewarding soldiers and perhaps because he had quarreled with his brother, Zack, when he married Martha, to whom Zack had been engaged, Captain, now Colonel Taliaferro came to settle in Georgia with his young bride in 1784.

Beyond this explanation, the author referred to the Gilmer book I mentioned yesterday, in detailing the economic pressures that made such a move from destitute Virginia after the war. Once Benjamin established himself in Georgia, and once that move was seen by other family members as successful, doubtless others in the family saw fit to follow suit. Feuding brothers or not, those migrating family members later came to include some of Zachariah’s own sons.

Even as recently as 1991, the Columbia County Chronicle continued to print stories on the origin of Taliaferro County, providing me with a nearly two hundred year long trail of newspaper accounts of my ancestor’s brother, whose pioneer move to up-country Georgia inspired his Taliaferro relatives of two generations to follow suit. 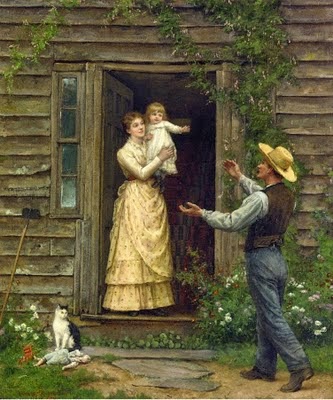 Above: "The Homecoming," 1885 painting by Jennie Augusta Brownscombe; courtesy Wikipedia; in the public domain.
© Copyright 2011 – 2022 by Jacqi Stevens at 2:40:00 AM
Email ThisBlogThis!Share to TwitterShare to FacebookShare to Pinterest
Labels: Georgia, Newspaper Clippings, On the Move, Taliaferro