I’ve heard it said that those who get lost in the woods sometimes wander in circles. Perhaps that is an urban legend, perpetuated by city slickers fearful of wilderness experiences.

Right now, I’m in my own genealogical wilderness experience, and I can certify: I am wandering in circles.

So I started out with my mother, moved to my maternal grandmother, and stretched only slightly to arrive at her mother, Sarah Ann Broyles, born in Washington County, Tennessee to proud parents Thomas and Mary Broyles in 1873.

While a number of people—and the family Bibles and genealogies they’ve kept—tell me Sarah’s mother was named Mary, they never seemed to agree on the spelling of her maiden name. Some said Rainey. Some insisted it was Ramey. Sometimes, the “e” or the “i” were removed from the spelling. Nearly all agreed, however, that Mary Rainey—or however she spelled it—was born to a mother who once was a Taliaferro.

How she spelled her surname—and even who her mother was—quickly became a moot point, however, as she only lived six years from the point of her marriage to Thomas Broyles in January, 1871. Her children—Sarah Ann and her sister Mary Nellie being the only ones surviving to adulthood—were raised by a step-mother. Likely, the girls remembered very little about their birth mother.

They did, however, remember one detail about their mother: they said she was raised an orphan. I had taken that family report literally, applying liberal doses of current reality to my understanding of just what it would have meant, in the 1860s, to be raised as an orphan. That, of course, would have meant the trail went cold with the very next generation. I would never be able to complete my research quest.

Now, I’ve come to the realization that being “raised an orphan” back in that era simply meant Mary Rainey’s parents both died before she came of age, herself. Fortunately, in the very city in which she was married—and had previously showed up in the 1870 census record—I had located her living with a brother. With two family names to trace, now, it helped to locate a family constellation that matched the picture in the preceding census, when the mother was still living. And likewise in the census prior to that, when both parents were still alive.

Moving back to the previous generation, though, isn’t proving to have as thoroughly laid out a paper trail. Mary’s mother’s name did indeed turn out to also be Mary—as family stories had led me to believe—and likely a Taliaferro, conforming to other researchers’ findings. At least, that’s what one Georgia marriage record to a Thomas Rainey indicated.

Where this Mary fits into the Taliaferro picture, though, is not making itself clear. That’s where I’ve been wandering in circles. I have yet to find any documentation yielding up the clue that points me to this Mary’s parents’ names. I can guess, though, based on where her youngest children ended up, after her death: somewhere in the family of Charles Boutwell Taliaferro, son of Warren and Mary Gilmer Taliaferro.

Perhaps Mary Taliaferro Rainey was a sister to Charles. After all, being the only brother among several sisters, Charles would have been the most appropriate choice for guardianship for Mary’s remaining underage children. Charles was certainly well-off enough to support a few more family members.

I’ve gone round and round in circles, trying to make some documentation paperwork stick in that gap in the genealogical paper trail. To no avail; I’ve made no progress despite strong effort.

Though we all have been so rigorously trained to do otherwise, I’m very tempted to begin doing “what if” scenarios, testing out possible parents for this Mary Taliaferro Rainey. Since my end goal is to find a nexus between my matrilineal line and that of my mitochondrial DNA test “exact match” mystery cousin, I’m already in a testing process. I’m working my way back in time in my mother’s line, and concurrently, tracing back this cousin’s line as well.

So far, this cousin’s line ends up in Kentucky in the 1830s, and yet, all I can find in my line at that point is a family settled in Georgia. Not close enough to find the nexus in this generation—which means sending me backwards in time for yet another generation. Or maybe even more.

On my line, that means a generational tour from Davis to McClellan to Broyles to Rainey to Taliaferro. But which Taliaferro? There were many to choose from, back in the days just following the American Revolution. Soldiers returning from battle brought home stories of wonderful lands, ripe for successful farming—and bounty rewards for their participation in the war effort to get them that new farm property in that distant paradise. Somehow, I’ve got to sort through all the possibilities to target the right family.

It all sounds so much like guesswork—not the staid process of evidence-based research. Dare I toy with hypotheses in a case like this? Run a name up the hypothesis flagpole and see if anyone salutes?

If I do follow my hunch that Mary Taliaferro was daughter of Warren and Mary Gilmer Taliaferro, that means I now begin pursuing the maternal line of this elder Mary. This will lead me to her mother, Elizabeth Lewis, and beyond that, to her mother, Jane Strother. I would then have to work back down in time, seeking each mother’s daughters and trace their daughters’ lines forward in time, to see if any such daughter would have a female descendant who became part of my mystery cousin’s matrilineal line.

All this, though, would be based merely on the hypothesis that my known matrilineal point—Mary Taliaferro Rainey—was daughter of Warren and Mary Gilmer Taliaferro. Which, at this point, I simply do not know.

Now that I’ve laid out the trajectory for my matrilineal line, tomorrow we’ll take a look at the matrilineal line of my mystery cousin, to determine who our targeted match might be. 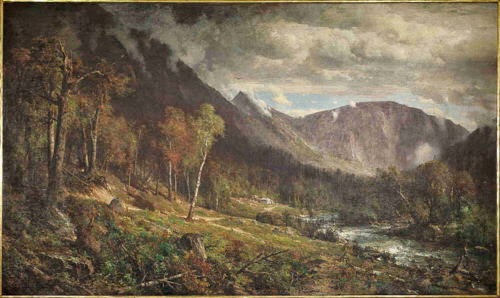 Above: "Crawford Notch" painting by Thomas Hill, depicting the site of the 1826 Willey family tragedy in the rugged White Mountains of New Hampshire subsequently commemorated by over four hundred artists as "White Mountain Art" of the nineteenth century; courtesy Wikipedia; in the public domain.
© Copyright 2011 – 2022 by Jacqi Stevens at 2:55:00 AM
Email ThisBlogThis!Share to TwitterShare to FacebookShare to Pinterest
Labels: DNA Testing, Taliaferro