Seeing History Through The Eyes of Family

Since I was a product of public schooling, I suppose that statement should be further adjusted to read, “I always hated history as the topic it was, presented to students according to public school curricula.”

Perhaps now you understand why, when offered the opportunity to become a home educator, I snapped up that chance the minute I could. Thirteen years of public schooling—from the year I almost flunked kindergarten (one of my mother’s favorite stories to tell on me) to the year I finally graduated from high school with twice the number of required units, only because New York State refused to let any students escape its clutches before their senior year—formed in my mind the anti-curriculum I knew was needed to mold an independent thinker.

Granted, I didn’t arrive at such conclusions unaided. Since my college years, I’ve been a voracious reader of any material discussing why we think the way we do—and why we came to decide that children should learn the way they’ve been compelled to learn.

Somewhere along the reading journey, I ran across a diatribe that accused textbook companies—or curriculum designers, I can’t remember which—of deliberately creating history classes that bored their victims to tears. Or to sleep.

Perhaps the observation was made by John Taylor Gatto—the renegade used-to-be Teacher of the Year in New York State, the turncoat who wrote the tome, The Underground History of American Education. Delving into the history of how western European school systems came to be the programs they are, he examined everything from education's Prussian and British roots to the personal experiences of his impoverished New York City students.

Or perhaps the observation was extracted from the writings of Prussian military theorist, Carl von Clausewitz, whose focus on strategic approaches of military masterminds may remind us of the corollary of that well-worn statement, “Those who cannot remember the past are condemned to repeat it.” After all, if one could learn from the mistakes of others—even brilliant military leaders—one could, theoretically, find a way to build a better mousetrap. Or at least a better military strategy.

So, was it truly the intent of education’s best and brightest, in leading the western world into an enlightened future for all, to strip history of all it held out to us in promise of saving us from the errors of our forebears? I don’t know. But I can certainly vouch for the sheer boredom in its resultant history curriculum. Sure, I memorized all those meaningless dates and spit them back in their appropriate slots on each multiple-choice test. Duly noted with factory-issued yellow-coated number two pencil.

Once redeemed from the jaws of the public school monster, I eventually turned to parenthood—and, much later, the choice of homeschooling at least one member of the subsequent generation. Somehow, as we plodded through the years, successfully circumnavigating all the curricular pitfalls of education, a new world began to open to me: the world of history, as it was meant to be learned.

That world of history was a realm of people and their stories—some tragic, some ingenious. Many were inspiring. With glee, I noticed that some historic subjects made great role models. I was actually beginning to like this stuff.

By the time we hit the junior high school years—yeah, I know they don’t call it that anymore, but you know what I mean—our family was associating with other homeschooling families in collectives. One of them sponsored a year-end academic fair—somewhat like a science fair, only not limited to the subject of science. Some of the students chose, for their displays, to use topics from history.

On the day of the event, what struck me most were the comments gleaned from those involved in the history displays. One boy had chosen to do a display on World War II—because his grandfather was in a specific battle. He had maps, diagrams, labeled photographs and, especially, memorabilia from his own grandfather included in the display. According to his parents, the topic came alive to him specifically because of the connection to a family member he knew and admired. The subject escaped the confines of the pages of a dull, dry textbook and became living history.

In a longer and much more convoluted way, this student’s experience was mirrored in my own. It has been in studying the context of my ancestors’ lives that I’ve become fascinated with history. Admittedly, it’s the history of their life and times and specific locality—but it is history. And I am loving it.

Something I never could have said in high school.

Perhaps these are the experiences which led educators to incorporate a component on family history into their curriculum—even in public school. I can’t say I blame them. History—like any story—means so much more when we find a connection. We need a reason to know why things happened the way they did. Family is one way to provide that reason. 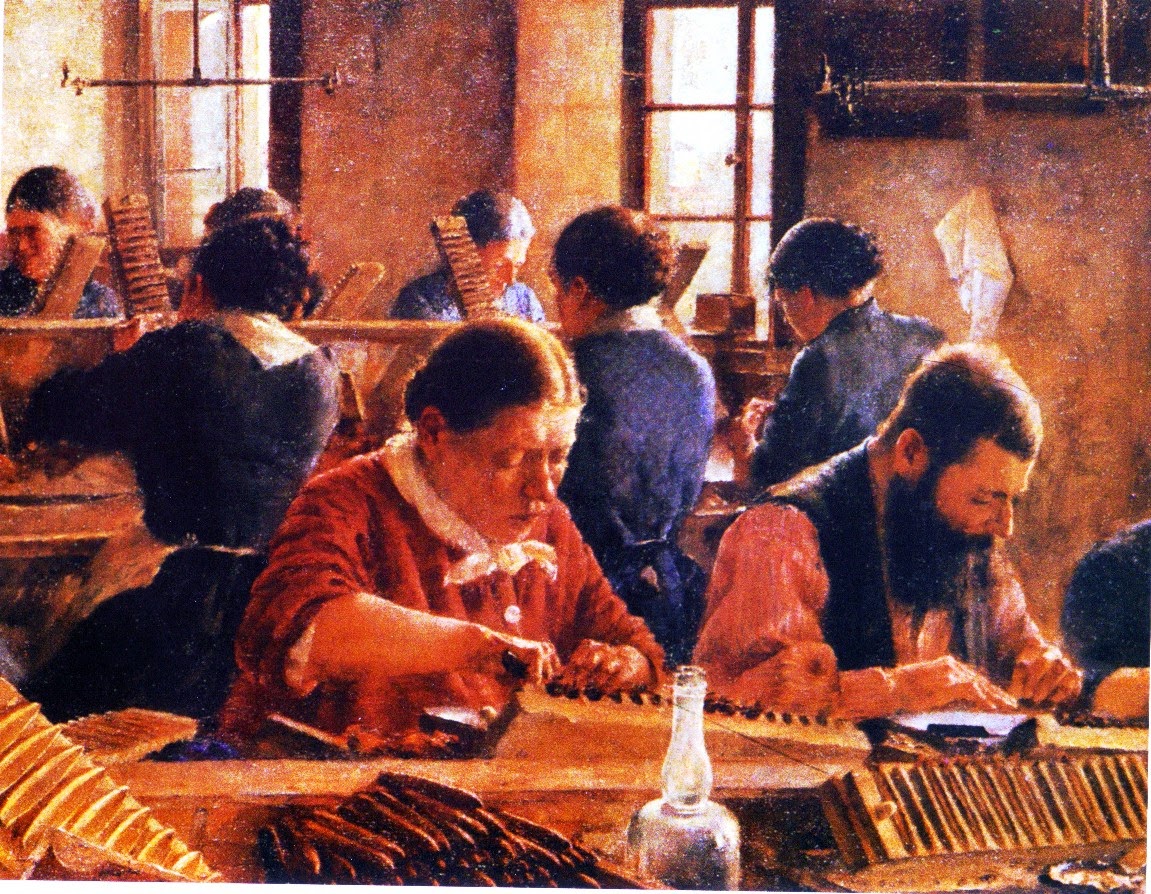 Above: 1889 painting, "Cigar Makers" by Johannes Marx (1866-1933); courtesy Wikipedia; in the public domain.
© Copyright 2011 – 2022 by Jacqi Stevens at 2:47:00 AM
Email ThisBlogThis!Share to TwitterShare to FacebookShare to Pinterest
Labels: Getting the Big Picture, Student Projects