Working as I have lately, trying to connect my matrilineal line with that of a mystery cousin who sports the exact same mitochondrial DNA match, I’ve begun to have a vague dread of participating in the genealogical equivalent of building the transcontinental railroad. You know: one line starts in the east and works its way west, the other starts in the west and heads eastward, with one great celebration supposedly happening when the twain meet up in the middle.

Somewhere, tickling the back of my mind, is a similar warning from the real Transcontinental Railroad. I wanted to pull up the story for you, because I found it so incredible when I first learned of it, and thought it contained lessons for those of us stuck in such research problems as mine. Of course, finding any mention of that story online ate up the greater part of my allotted time yesterday in preparation for writing this. But slight as it is, at least I’ve found one mention of the vignette, and that’s good enough for me.

You see, amidst all the drama of the massive American project—to build the nation’s first overland route and secure a connection from the already-existing rail network in the eastern half of the continent to the San Francisco Bay at the western terminus—there were some technical difficulties.

Totally understandable, of course. Think of it: the project called for nearly two thousand miles of railroad line, laid down through the relative wilderness of the western portion of the country. Rather than having one company start at one end and work their way to the other side, the plan enlisted the work of three railroad companies: Western Pacific, Central Pacific and Union Pacific. Their task: to deliver a product that would meet up in the middle. With a strategy like that, there was bound to be problems.

Of course, learning about the feat from our side of history, we hear about all the hoopla of the successful meeting at Promontory Summit, Utah, where the legendary “Last Spike” of gold—no, silver…no, gold and silver—was supposedly driven into place, celebrating the connection of the two lines and the completion of the mammoth project.

What we don’t hear—at least, not often—was that those two lines didn’t exactly meet in the middle. We hear a lot about the construction challenges. About clashes between Chinese and Irish labor teams. And especially, about the grand celebration at the end. But not about how the railroad companies failed to make their own connection.

It took a lot of searching to find any report of this little detail online, but I found one mention of it—not in any of the usually expected places, mind you, but it will do for the point I have to make.

I had to borrow the narrative from a contributor to an economics blog. The writer, Mark Pribonic, was mentioning how he and his daughter, while on a ski vacation in Utah, decided to take a detour to visit the Promontory Summit museum established to commemorate this great accomplishment, the Transcontinental Railroad. Apparently, the historic site includes a self-guided walking tour alongside the original railroad grade built for the project.

It was at the second stop on this walking trail that the author happens upon the very thing I wanted to point out. I’ll let him share the observation in his own words.

The author adds that the guidebook mentioned that “the work camps for the two groups were literally separated by a hillside.”

So, what does that have to do with genealogy? Just recall the current project in which I’ve got myself entangled. I’m racing my way back in history to a supposed point on my mother’s line from which I can catapult forward in time, tracing every woman’s line back down to modern times. Concurrently, my mystery cousin is pushing his way back through the generations on his mother’s line.

We are hoping to meet in the middle.

Considering stories like the miscalculations of the Transcontinental Railroad, this does not bode well for us.

For almost any such project, it provides a warning of dire consequences. Do not, for instance, think any hearsay that you are related to George Washington, or Charlemagne—or whoever strikes your fancy from the halls of history—is an appropriate impetus to begin your own Transcontinental project. You and history will not meet up in the middle.

And neither will we—possibly. At least our Transcontinental project is more like a U-turn than a badly conceived straight line. But I still need to keep in mind the risks inherent in such a project. And, above all, not yield to the temptation to “make it work” by bending a few fuzzy possibilities into links. After all, I’m not up for being a passenger on a genealogical train wreck. 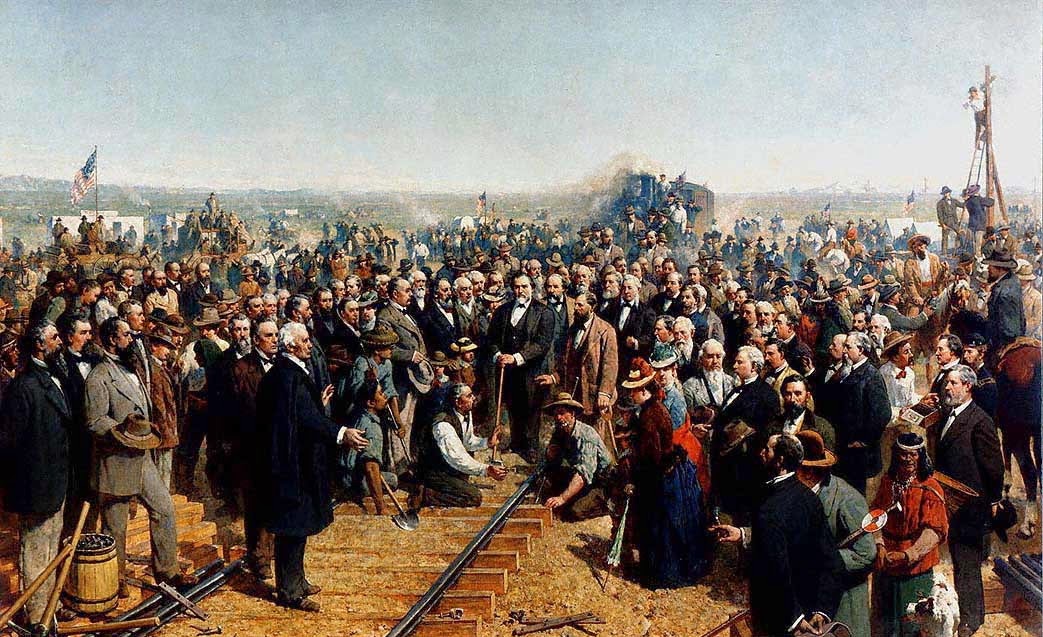 Above: "The Last Spike," 1881 painting by Thomas Hill, commemorating the 1869 ceremony of the driving of the Last Spike of the Transcontinental Railroad at Promontory Summit, Utah; courtesy Wikipedia; in the public domain.
© Copyright 2011 – 2022 by Jacqi Stevens at 2:49:00 AM
Email ThisBlogThis!Share to TwitterShare to FacebookShare to Pinterest
Labels: DNA Testing