Stopping to Smell
Those Genealogical Roses

Every now and then, I run across a solitary detail that makes me perk up and realize the discovery calls for a break from the relentless grind of research. This week, I had such a moment.

Sometimes, in completing genealogical projects, it seems I am just flying through the steps, gleaning data from documents and affixing them to the appropriate locations on my extended family tree. In the case of this current project—that of laying down the foundation of the entire Taliaferro line from settlement in the American colony of Virginia to current day descendants—the rush seems doubly weighing.

The current Taliaferro line I’ve been concentrating on has been that of Dr. John Taliaferro, son of Richard Taliaferro and his wife, Rose Berryman. If you recall your Taliaferro genealogy well—and I can’t blame you if you don’t, even after reading along here at A Family Tapestry faithfully for the last few months—you will realize that Dr. John was younger brother of the Zachariah Taliaferro who was my sixth great grandfather.

My purpose in gathering what seems like extraneous family detail is to provide a database from which to extract links to the seven hundred fifty matches to my autosomal DNA test—many of whom likely relate to me thanks to such colonial connections as the extended Taliaferro family.

Right now, I’ve been laying down a tentative family trail by use of published genealogies from the prior century. I realize these may be rife with fallacies, but I am also certain that, with the aid of computerized search assistance, I can verify those details which were correct in the original publications and modify those which need attention.

The current book I’ve been using has been Willie Catherine Ivey’s The Ancestry and Posterity of Dr. John Taliaferro and Mary (Hardin) Taliaferro, originally published in 1926. There are several copies of this compilation in libraries across the nation. Thankfully, the Sutro Library in San Francisco was within driving range for me to locate it in my earliest days of research, long before the dawn of convenient online search capabilities—but that edition is now available online through subscription services such as Ancestry.com and Heritage Quest.

At that point, I started copying out the information on the Jossey daughters, Lorene and Leona. Lorene happened to marry a man whose surname was McNabb, and I couldn’t help but chuckle when that surname conjured up images of law enforcement caricatures created by opportunists in the cartoon world.

I found my mind jerked back to the real world when I moved on to the entry on Lorene’s younger sister, Leona. Born in 1870, by the time she turned the appropriate eighteen years of age, she was given in marriage to a man listed in the Ivey book as Frank L. Stanton. The author’s narrative went on to explain,

Mr. Stanton is Poet Laureate of Georgia and is also connected with The Atlanta Constitution.

Poet laureate? Connected to The Atlanta Constitution? This might be cause to stop and investigate. 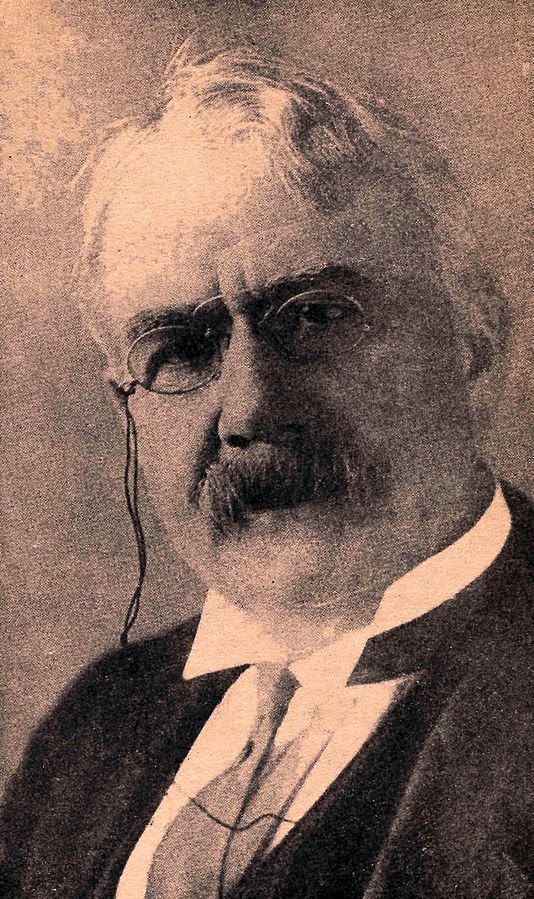 I turned to the ever-handy Wikipedia to check out my hunches. Wikipedia obliged, with an article explaining that Frank Lebby Stanton was indeed a columnists for The Constitution—as well as being a well-known lyricist and, two years before his death, appointed the first poet laureate of the State of Georgia by then-governor, Clifford Walker.

Stanton’s roots provide some grounding for his career trajectory. As early as the 1860 census, the three year old Franklin L. Stanton was in the South Carolina household of editor Valentine Stanton. After the Civil War, he was apprenticed to a printer—an occupation he assumed in his early twenties, as witnessed by this 1879 city directory for Charleston, South Carolina.

Through a series of career moves—coupled with sage advice from luminaries in the field of journalism—Stanton ended up in his position as editor and columnist at The Constitution by 1889.

That is all very nicely academic for those of you who aren’t really concerned about the monotonous details of the in-laws of other people’s families. However, by following this Stanton rabbit trail, I discovered a bit more about just what prompted the governor of Georgia to pin Frank L. Stanton with the title of Poet Laureate.

I also discovered how I connect with the creator of the poem inspiring the dubbing of the organization, Graveyard Rabbits.

Perhaps, as a genealogical researcher yourself, you are familiar with the concept of The Association of Graveyard Rabbits. It doesn’t take but a moment of perusing their website to spot a couplet from the poem that inspired their name:

Among the graves…in the gloom and gleam,
Content to dwell where the dead men dream…

The author of that verse, of course, was none other than Georgia’s first Poet Laureate, Frank Lebby Stanton.

In a beautiful setting on a different website—A Graveyard Rabbit in Southeast Missouri—blogger Anne Berbling shares the entire poem on the right sidebar, just under the Graveyard Rabbit logo.

The original poem, “The Graveyard Rabbit,” first appeared in Edmund Clarence Stedman’s American Anthology 1787-1900, along with four other Stanton poems. In addition, many of Stanton’s poems were set to music, including the lullaby, “Mighty Lak’ a Rose,” one of several “dialect songs” of the era—though this one has endured through generations.

The rose became a trademark detail of Stanton’s work, reappearing in such poems as “Keep A-Goin’!”

If you strike a thorn or rose,
Keep a-goin’!
If it hails or if it snows,
Keep a-goin!
’Tain’t no use to sit and whine
When the fish ain’t on your line;
Bait your hook an’ keep a-tryin’—
Keep a’goin’!

Do you suppose, at the point of his death in 1927, that his contemporaries who took their place in my immediate family line realized their connection to so beloved a writer? Hardly. My maternal grandmother, descending from the same Richard and Rose Taliaferro line, would have been fifth cousin to Leona Jossey Stanton, Frank’s wife.

How many of you know your fifth cousins?

Yet, more of us are familiar with the work of Frank Lebby Stanton than we realize. From lengthy to lyrical, Stanton’s works adorned the pages of over three hundred publication in three languages, commemorated occasions of state, and were carried on catchy tunes of his time. He was acknowledged by many as the prototype for American newspaper columnists. Even at the close of his life, Stanton's 1927 memorial carries the quatrain so widely quoted during his lifetime:

This old world we’re livin’ in
Is mighty hard to beat.
You get a thorn with every rose,
But ain’t the roses sweet?

Strictly speaking, it would be unlikely for a genealogist to make a detour to consider the in-laws of a fifth cousin, twice removed. But sometimes, even we need to lift our noses from our research grindstones and stop to smell the roses. 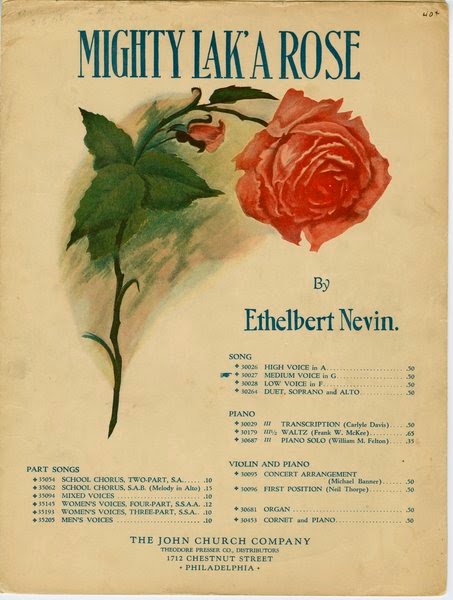 Photograph, top right: Frank Lebby Stanton, circa 1920; below, 1901 cover of sheet music with lyrics written by Frank Stanton, "Mighty Lak' a Rose." Both images courtesy Wikipedia; in the public domain.
© Copyright 2011 – 2022 by Jacqi Stevens at 2:47:00 AM
Email ThisBlogThis!Share to TwitterShare to FacebookShare to Pinterest
Labels: Blog Recommendations, Cemeteries, Georgia, Taliaferro