If you think, by all my recent talk about cutting-edge technology for genealogy, that I’ve given up on the tried and true in the dusty archives of yesterday’s records, think again. DNA testing may help us do that end run around our genealogical brick walls—and that’s great—but there is nothing like finding detailed passages about an ancestor in a newspaper article, old letter, or better yet, in a recognized book of the family’s genealogy.

One thing that has always bothered me about genealogical research is that it seems to focus on precise identification of names, dates, locations and parentage—but leaves us knowing next to nothing about these people we call our ancestors. I want to know more than these vital statistics; I want to know who these people were.

That’s why I’ve personally taken to delineating the difference between the two pursuits: calling the former efforts genealogy, and placing the personal descriptions in the category of family history. I know some people consider the two terms synonymous. But now you see why I don’t.

Let’s take an example from the family I’ve been discussing: that of the sons of Zachariah Taliaferro, senior, and his wife, the former Mary Boutwell. I mentioned yesterday that the eldest son, Benjamin, had moved from the family home in Virginia to new territory in Georgia after the end of the Revolutionary War, leaving behind his younger brother, Zachariah, my fourth great grandfather.

The two had not parted on the best of terms. There is a reason for that—a reason I’ve been able to glean, thanks to the points of view expressed in two different books. If it were not for the research libraries which continue to keep such old volumes in their collections—and for the up-and-coming organizations that are converting these old publications into digital files—I would never have known even as much about these ancestors as their physical descriptions.

Take Benjamin Taliaferro, the oldest son of Zachariah Taliaferro, senior. According to a passage on the family in the book, Sketches of Some of the First Settlers of Upper Georgia, after Benjamin was released from imprisonment by the British during the Revolutionary War,

[H]e was in the full vigor of young manhood when he left the British quarters to mix again with his neighbors in Amherst. His person was six feet high, his features handsome, and his understanding good. Army intercourse had refined his manners and made his conversation agreeable.

Likewise, it was thanks to a description in another book that I learned of the appearance of Benjamin’s brother Zachariah. According to The Descendants of Capt. Thomas Carter of “Barford,” Lancaster County, Virginia, my third great grandfather had also been a soldier in the Revolution, and had been described as

Bouncing between the two volumes—the first written by George R. Gilmer, the second by Joseph Lyon Miller—I learned much more than just the physical description of the two Taliaferro men. I learned what caused the rift between them, prompting each to go his own way—Benjamin to Georgia, Zachariah to South Carolina.

Using first the Gilmer book to uncover the Georgia side of the story, we are introduced to another player in the drama.

Martha Meriwether, the only child of David Meriwether, a neighbor of old Zack, was a blooming, charming young woman, when Capt. Taliaferro [Benjamin] returned to Amherst. They soon met, admired, and loved.

Right away, we discover the cause of the rift (as if you hadn’t foreseen the following from the text so far).

Martha Meriwether had previously been engaged to marry Zack Taliaferro, a brother of Capt. Taliaferro. The struggle was hard on the part of the army man of honor to resist the temptation to supersede his brother. But love conquers all. The red-coat got the better of the gown. The brothers quarreled and parted, never again to meet in friendship.

The conclusion of the story, from the Georgian point of view, seems believable enough.

The disappointed lover quit the country for a residence in Pendleton, South Carolina, where he remained a bachelor until the bright hopes inspired by youthful beauty were dissipated by the loose habits of frontier society and the struggles of a lawyer’s life.

That, of course, would not be quite how the South Carolinians would have seen the conclusion. While the Pendleton District may have originally been considered a frontier, Zachariah did quite well for himself, as it turns out. Not only was he successful as an attorney, but he did—eventually—find the happy ending to his own story.

This, though, we have to find by looking up his line in a different book than that favoring the Georgian line. The Miller book provides the details on the rest of Zachariah’s love story.

One summer when about the age of forty years he was visiting his relatives and friends in Virginia. On the eve of his return to South Carolina he was persuaded to remain a day longer and attend a grand ball at Fredericksburg the next night. The night before the ball he dreamed that he attended the dance and on entering the room saw a beautiful young lady at the other end of the room tying her slipper. The night of the ball, as he entered the room his dream was singularly verified. He sought an introduction and later the young lady—Margaret Chew Carter—became his bride.

That fairy tale rendition seems almost apocryphal in its happy ending. Perhaps in its several iterations by family storytellers over the generations, it has been somewhat embellished. However, one thing I know: Zachariah Taliaferro did indeed meet and marry a woman named Margaret Chew Carter.

Stories such as these are the stuff that makes our dreary old genealogies come alive—to ourselves, and to others. And the resources to find them are even more so at our fingertips than ever before. Everything from Google search to FamilySearch.org can provide us with the leads to locate such books. The growing number of repositories of digital records—such as HathiTrust and Internet Archive—allow us to search for mentions of our surnames. If nothing else, once we find promising titles of old genealogy books, with WorldCat, we can pinpoint the nearest library holding the volume we seek. Whether by a day trip to an out of town library, or by inter-library loan, we can locate the books which promise to give us that better idea of who our ancestors really were. 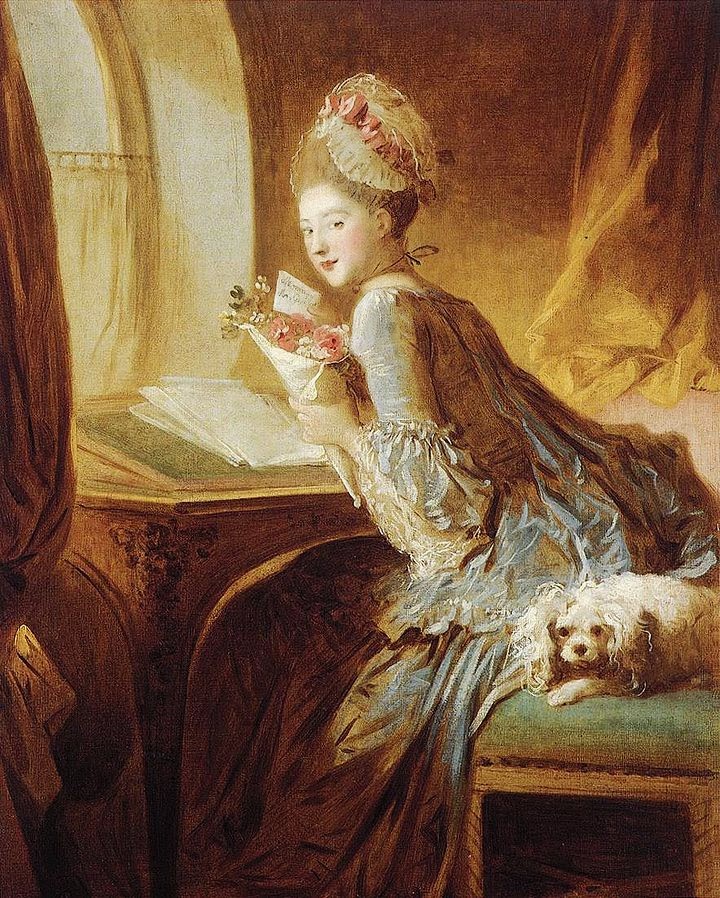 Above: "The Love Letter," 1770 oil on canvas by Jean-Honoré Fragonard; courtesy Wikipedia; in the public domain.
© Copyright 2011 – 2022 by Jacqi Stevens at 2:53:00 AM
Email ThisBlogThis!Share to TwitterShare to FacebookShare to Pinterest
Labels: Books, Georgia, South Carolina, Taliaferro, Virginia, Weddings