When “History” Was “Current Events”

If bombs were exploding around our property today, we would be terror-stricken. Yet, the full thrust of a battle occurring over two hundred years ago seems nothing more than a dusty passage of innocuous words. There is a certain haziness encircling the events of history removed from our current day by not just years, but centuries.

Revisiting the histories of my own ancestors is somehow bringing those tumultuous times back to life for me. However, it is not the tangible memorials of monuments or publications or national parks that help me gain a sense of what that history was like for those who lived through those times. It is the personal recounting, from the eyes of family members who were there, that provides the visceral reactions to transform the experience from understanding facts to feeling history.

I mentioned yesterday that, in reviewing all the siblings of the senior Zachariah Taliaferro, my fifth great grandfather, I’ve been reading about the lives of men and women who lived through the American Revolution. Indeed, it was because of Zachariah’s own participation as a “Patriot” that I’m entitled to apply for membership in the Daughters of the American Revolution.

One of Zachariah’s younger brothers, John, also lived through that time. He was the fifth child of Captain Richard and Rose Berryman Taliaferro. Born in Caroline County in the British colony of Virginia, John made his arrival on April 7, 1733. As a young man, he studied medicine, becoming a doctor. A dual call on his life resulted in his becoming a Baptist minister as well—a role that doubly equipped him for his duties to his fledgling country at its birth, for John, too, was to become what the D.A.R. now calls a “Patriot.”

Dr. John had settled in Virginia, marrying Mary Hardin, daughter of Henry and Judith Lynch Hardin. Together they raised a large family of ten children, all of whom—but for the youngest—were born in Virginia.

The eldest of his children, Richard, born in 1756, must have been his father’s pride and joy. A close companion who sought to follow in his father’s footsteps, at the beginning of the Revolution, Richard moved his household to Surry County, North Carolina, when his father did. Their properties were near each other, along Fishers River in this mountainous county bordering Virginia.

Apparently, at the outbreak of the Revolution, Dr. John had organized a company of minutemen, becoming their captain. Perhaps that explains why, in his family’s move to North Carolina, he was accompanied by others, such as Bernard Franklin—father of a future governor of the soon-to-be-formed state of North Carolina.

As captain of his company, Dr. John became part of the company reporting to Nathanael Greene, Major General of the Southern Campaign. As Taliaferro family historian Willie Catherine Ivey explained in her 1926 genealogy, Ancestry and Posterity of Dr. John Taliaferro,

Dr. John Taliaferro was a teacher and Baptist preacher and the only physician in Surry County at that time. He followed Greene’s army as surgeon, and administered to the sick and wounded soldiers; giving to them such comfort and physical relief as only skilled hands can offer; and pouring forth his very soul in words of spiritual comfort to the dying upon the field.

Dr. John’s eldest son Richard, by now in his twenties, followed in his father’s footsteps, enlisting along with his cousin, Jesse Franklin. The Ivey narrative explains:

Jesse and Richard rode down from Surry to join Greene’s forces and fought as privates, side by side; Jesse loading their two old flint locks and Richard doing the firing.

On March 15, 1781, in a field near what is now Greensboro, North Carolina, Richard’s company of North Carolina militiamen faced the British in what is now known as the Battle of Guilford Court House. A two thousand man British force under the command of Lieutenant General Charles Cornwallis faced the larger—but less well-prepared—contingent of Greene’s forces. Included in the British forces were dragoons from Banastre Tarleton’s British Legion and the British 23rd Regiment of Foot.

Greene, the American commander, had prepared his defense in three lines, with the North Carolina militia forming the first line. When the opposing forces met, the battle lasted only ninety minutes. Though outnumbered, the British defeated the Americans, but in the process lost over a quarter of their men.

When the order had been given to retreat,

Richard Taliaferro was the last man in the field at Guilford; he died from a saber thrust from one of Tarleton’s dragoons.

Ivey quotes from a resource she refers to only as “Schenck’s History, ‘North Carolina 1780-81’ chapters seven and eight…page 301”:

…these riflemen of Surry were…the very last to leave the field, after Tarleton’s final charge…in that charge Taliaferro, of Surry, was killed, and Jesse Franklin, afterwards Governor of North Carolina and United States Senator from this State, made a very narrow escape.

…was doing all he could to relieve suffering soldiers…the wounded were moved…four miles away…and he [Dr. John] worked among the wounded as long as his services were needed, burying many in the graveyard there. He [also] did all he could for the British that were left on the field…

The narrative could simply have passed for yet another passage of historical reporting—until, that is, you realize the impact such events have on a personal level. The Ivey recounting of the aftermath of the battle just gets me:

It is stated by members of the family that when Jesse Franklin brought Richard Taliaferro’s horse and trappings home from the battlefield, that his dogs recognizing his clothing, whined and moaned for him. This scene was so pathetic that it was indelibly impressed upon the hearts of all who witnessed the return of the horse without his master.

Willie Catherine Ivey reports in her book that a monument was erected in 1893 by then-governor Thomas M. Holt to commemorate “three heroes of the battle.” The three men she named were Major Joseph Winston, Captain Jesse Franklin and Richard Taliaferro. According to Ivey, the tablet reads:

In memory of North Carolina Troops under Major Joseph Winston, who were fighting the Hessian and Tarleton’s cavalry near this spot after the Continental line had retreated from the field of battle, March 15, 1781.

In reviewing the website of the current National Park Service Guilford Courthouse National Military Park, I don’t find reference to any such designation. Perhaps, if I were to tour the site in person, I might find the monument to which she referred.

While such a marker would be a tangible way to designate what occurred in our country’s history, however, there is nothing that would leave as visceral a mark as the recounting of Richard Taliaferro’s horse, without his master, being returned home from battle. That’s the kind of designation that leaves an indelible memorial—in our hearts. But only if each generation is faithful to pass along its recounting. 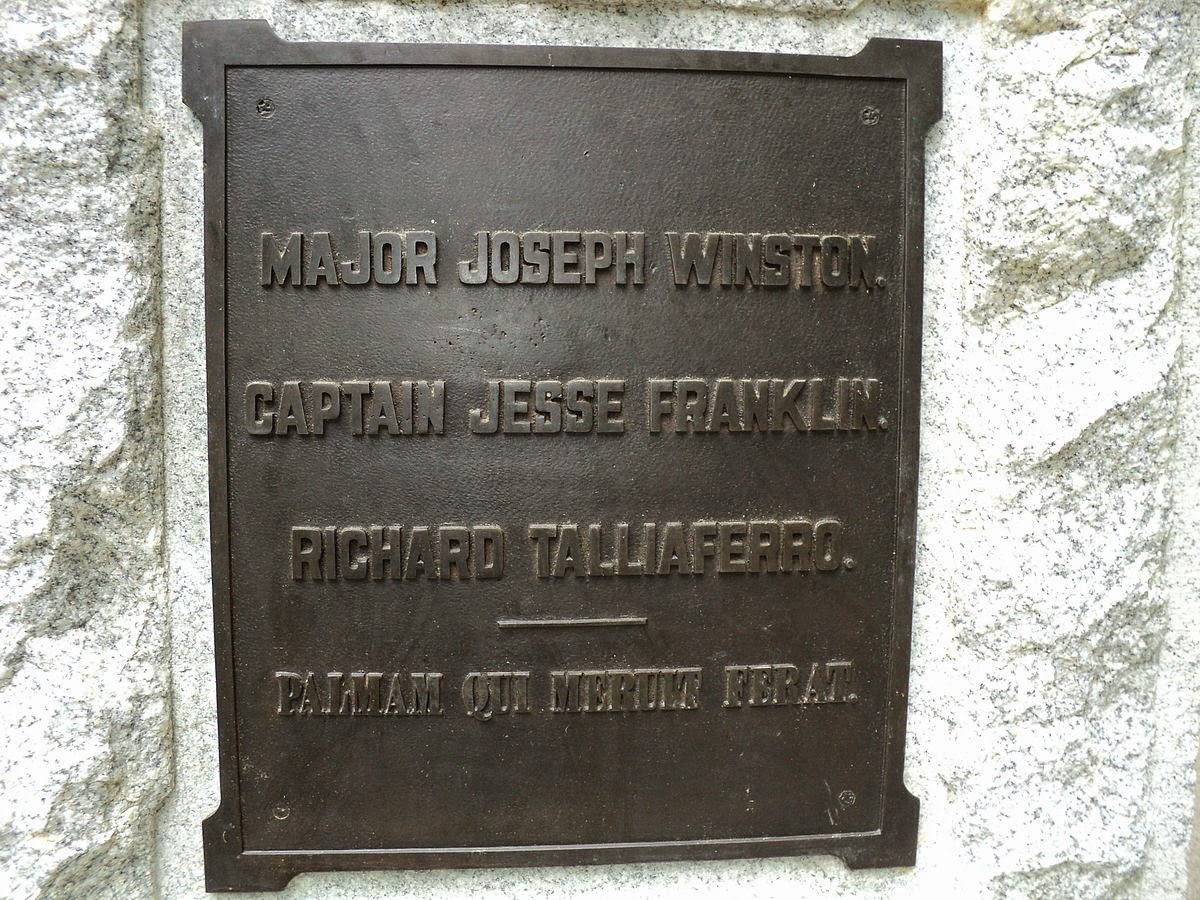 Above: Photograph of the plaque on the grounds of the Battle of Guilford Courthouse, listing the names, "Major Joseph Winston, Captain Jesse Franklin, Richard Talliaferro; Palmam qui meruit ferat."  Note that, at the time of the 1781 battle, both Richard Taliaferro and Jesse Franklin (the younger of the two) were serving as privates; doubtless, the affixed title was acquired at a later date. According to Ivey, this plaque is on the side of the tablet with the larger quote cited above. Photograph credited to Wikimedia contributor MarmadukePercy; used, unchanged from original, by permission; this file licensed under the Creative Commons Attribution-Share Alike 3.0 Unported license.

© Copyright 2011 – 2022 by Jacqi Stevens at 2:45:00 AM
Email ThisBlogThis!Share to TwitterShare to FacebookShare to Pinterest
Labels: Military Service, Taliaferro, Wars