One Shred of Evidence

While the letter it held is now barely legible, the envelope that directed that melancholy message home to the waiting wife of Stephen Mulloy—or Mulory, as the flourish on the signature seemed to say—is worth much to us, one hundred sixty five years later. In the style in which the Irish addressed their letters, that envelope gives us the actual directions on how to get from the port city of Cork northward through its namesake county to the county borderlands of Parish Ballyagran, where Stephen’s wife and baby daughter lived.

The date on the letter was February 20, 1849, and faint remnants of the postmark show what looks like an “Fe 22” and a “CHAR”—possibly for the town the letter must pass through on its way to the border with County Limerick.

As frustrating as the Irish may be for historically fudging on such statistics as their age, one can’t quite fault them for their liberal handling of the spelling of the English language. After all, it was a foreign tongue foisted upon them unwillingly. Just as I’m not yet sure whether Stephen’s own surname was spelled Mulloy or Molloy or Malloy, as many records have since shown it, Stephen seemed to be unsure of the spelling verdict, himself. Signing the letter with his name spelled as Mulloy, he then addressed the envelope to his wife as Anne “Moley.”

Likewise, we must be as generous with the handling of the place names—those towns and road marks through which the letter passed on its way to his “Dearest Wife.” Was the place name “Cappanahane” or “Coppanahane”? Which one is actually part of the geography of that postal route?

It makes sense to interpret the barely legible county name as Cork, for the town named on the envelope—Charleville—is on the main road through Cork to the city of Limerick.

I had posted a query once to a forum in which historic forms of letter addressing were being discussed. Someone knowledgeable about the topic had informed me that addresses in Ireland, at least at that time, served more as a road map than our traditional format outlining the city grid of roads and numbered parcels of land and houses. The letter seems to be directed to take a route from Cork through Charleville to Cappanahane—wherever that might be—and, though I can’t now make out the name, directly to a specific landowner’s property.

Perhaps, next fall, I will be able to re-create that route and walk down the very road where Anne “Moley” and her baby daughter once lived, awaiting word from a missing husband concerning his welfare. Apparently, by the time his message reached her, he was already gone—on his way to a place far, far away.

With a sudden move like that, the news must not have been good. 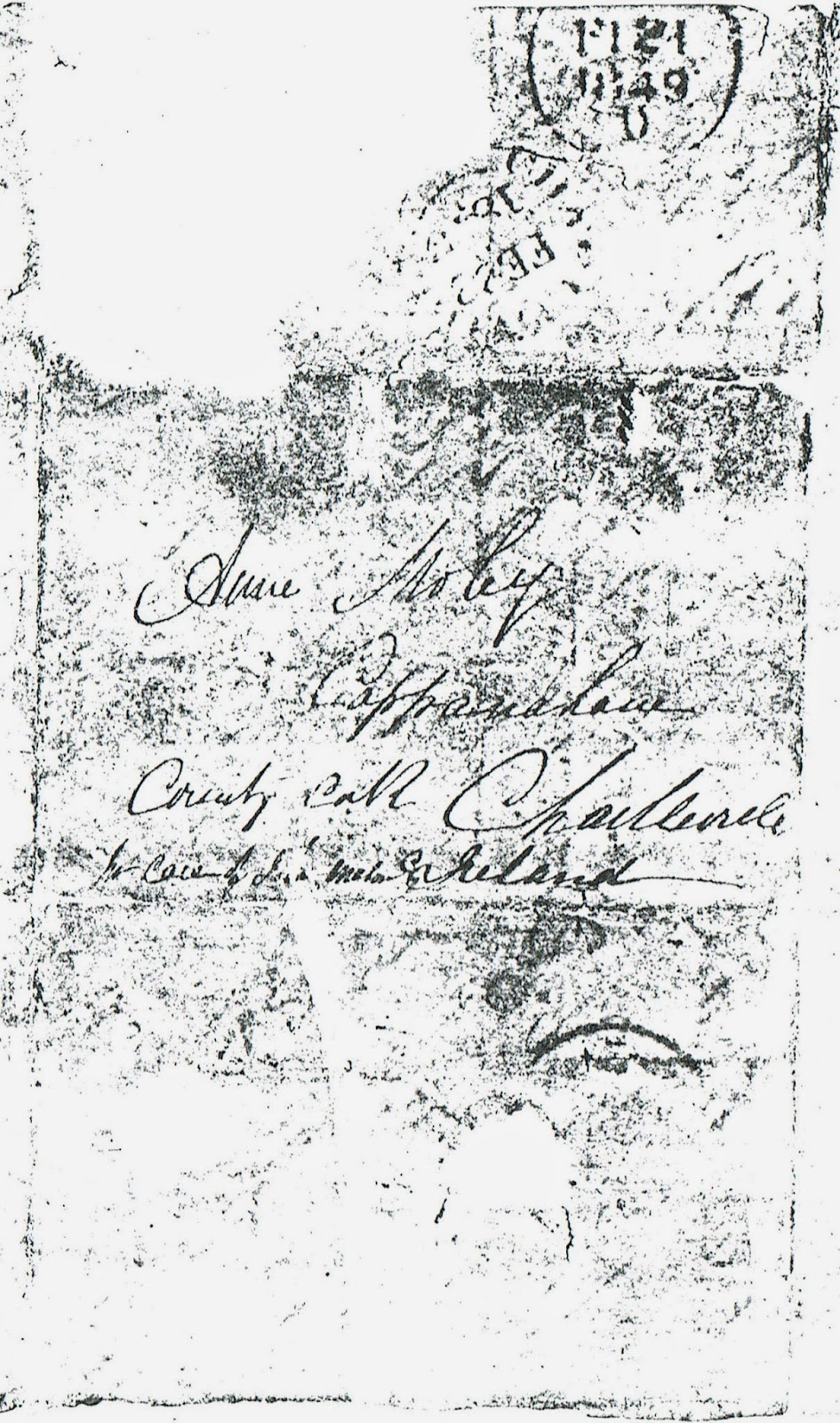