In assessing all that needs to be done to ready myself for our planned research trip to Ireland later this year, there is yet one more surname needing further study: Stevens.

As much as I feel I know about the other Irish surnames in my husband’s family, the one we carry on a daily basis is the one I’ve been least successful at researching. How can that be?

I owe part of my difficulty to the unfortunate—though quite predictable—choice of given name for our earliest Stevens immigrant: John. But that is not the only reason I’m facing challenges. I’ve been told by some that the surname Stevens is not exactly an Irish surname. It is taken as an English name more than an Irish one.

Wikipedia designates the surname Stevens as “Anglo Saxon.” Ancestry.com characterizes it as an English patronymic name derived from the given name, Steven, and provides maps indicating the prevalence of the surname in various parts of the United Kingdom—but not Ireland—in which the name occurred in the 1891 census. On the surname search section of The Irish Times, using data from Griffith’s Valuation from 1847 to 1864, it appears there are some Stevens families in several counties in Ireland, although The Irish Times also notes the larger proportion spell their name as Stephens rather than Stevens, and that this was also considered the surname of later English immigrants.

Fortunately—or at least that was how I felt when I first discovered it—I have a handy document to guide me to the location in Ireland from which our first Stevens immigrant came. True, I haven’t been able to push back in time any more since locating that document on a trip to Lafayette, Indiana, where the original John Stevens ended up, but I’m clinging fiercely to this slip of paper in hopes it will lead me somewhere.

The document—a declaration of intent—told me the story of John Stevens’ arrival in Indiana: that he was born in County Mayo, that he left Ireland via Liverpool, England, sailing to New Orleans in December, 1850, and then, presumably, up the Mississippi River and its tributaries to Lafayette, perched as it is on the Wabash.

Even though I was able to find another Declaration the subsequent year for a man named Hugh Stevens who repeated essentially that same route—assuming he was John’s relative—I was not able to trace either of them back to their homes in County Mayo. Nor, incidentally, was I able to find any trace, in subsequent years, of the mysterious Hugh.

Here I am, years after discovering those documents, still unable to even find passenger records for John or Hugh in New Orleans—let alone records of their life in County Mayo before that point.

Of all the stops we hope to make around the island of Ireland during our visit, County Mayo will be the one for which we are least informed. Though it is the surname we’ve carried down from those years long ago when John and Hugh first arrived on American soil, it is a name of which we know precious little. 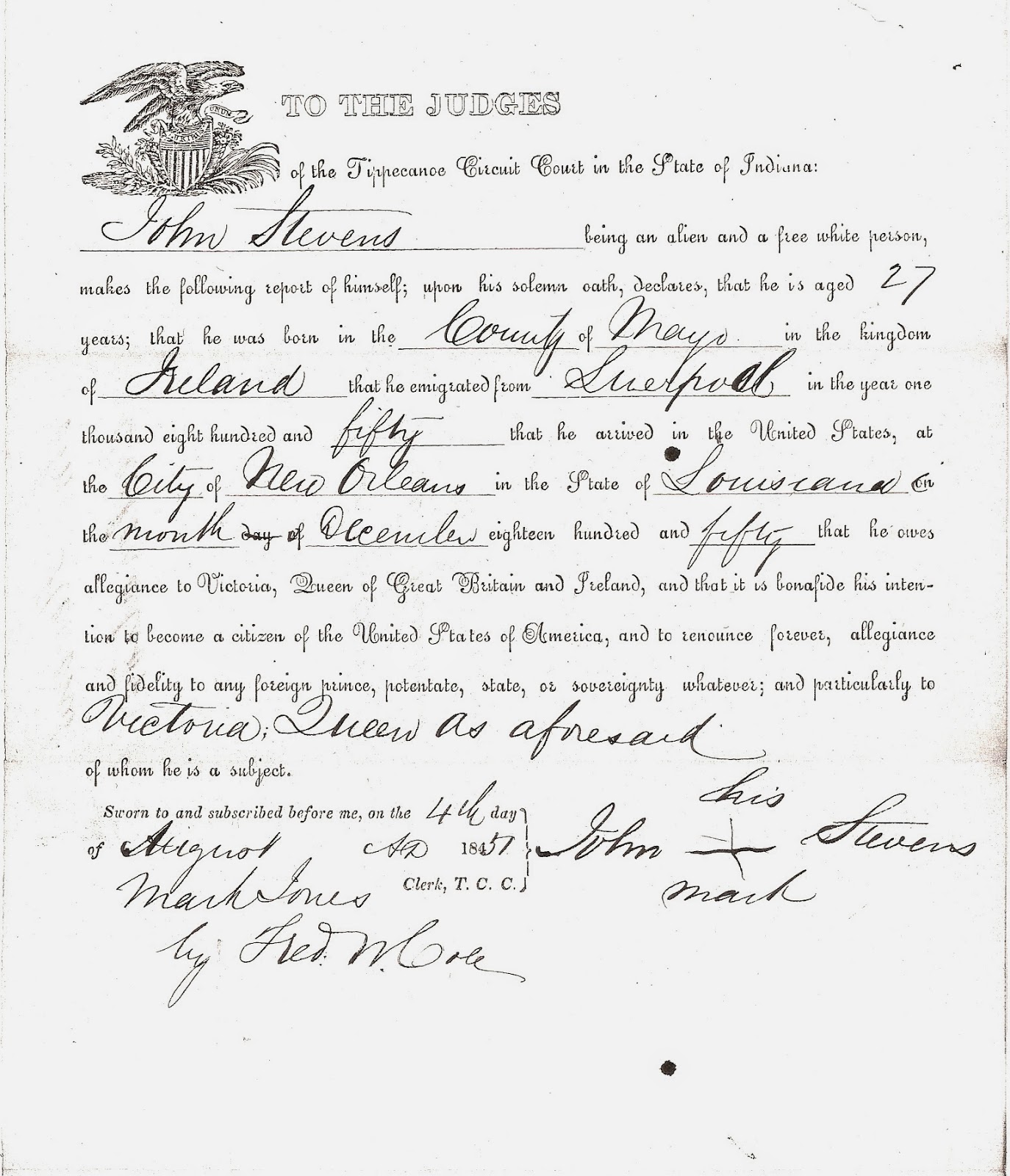 To the Judges of the Tippecanoe Circuit Court in the State of Indiana:


John Stevens, being an alien and a free white person, makes the following report of himself; upon his solemn oath, declares, that he is aged 27 years; that he was born in the County of Mayo in the kingdom of Ireland; that he emigrated from Liverpool in the year one thousand eight hundred and fifty; that he arrived in the United States, at the City of New Orleans in the State of Louisiana on the month of December eighteen hundred and fifty; that he owes allegiance to Victoria, Queen of Great Britain and Ireland, and that it is bonafide his intention to become a citizen of the United States of America; and to renounce forever, allegiance and fidelity to any foreign prince, potentate, state, or sovereignty whatever; and particularly to Victoria, Queen as aforesaid of whom he is a subject.

© Copyright 2011 – 2022 by Jacqi Stevens at 2:49:00 AM
Email ThisBlogThis!Share to TwitterShare to FacebookShare to Pinterest
Labels: County Mayo, Documentation, Immigration, Stevens