It’s been years since our family stopped by Lafayette, Indiana, the county seat of Tippecanoe County. Just over one hundred miles southeast of Chicago, it made a handy resting spot just off the Interstate on our way from family visits in Chicago to see relatives in Columbus, Ohio. I always was careful to have a quick research goal to accomplish on the drive by.

On one visit, we planned to locate the grave of Catherine Kelly Stevens—the young mother who had died just after the birth of her third son. Best I could tell, she was buried at a place called Greenbush Cemetery.

To prepare for that trip—a quick stop of only a few hours before we got back on the road—I had to make sure to glean all the details I could. Somehow, I located a record through a GenWeb posting—keep in mind, this was years before the widespread dependence on sites like Find A Grave. It showed a family plot at Greenbush Cemetery which included an entry for a “Catherin K. Stephens” who died May 3, 1858.

Not being able to find much on Greenbush Cemetery online, I resorted to asking around in the online genealogical forums of the time—Rootsweb and GenForum. I hadn’t even been able to find information on where the cemetery was located, much less where Catherine’s headstone could be found. All I could think of was arriving at a huge cemetery after office hours had ended, staring at rows upon hundreds of rows of grave markers with no clue where to begin searching.

I wasn’t going to let that happen to me this time.

I don’t remember exactly how it happened, but somewhere in the midst of posting queries to the online forums, I got a response from a volunteer named LouAnn Clugh. Not only was she eager to help by giving me directions to the cemetery, but she gave me her phone number and told me to call when I had an idea of when I’d be arriving in town.

The night before our family left for our road trip, I called LouAnn—remember, this episode predated cell phones, too. I was delighted to hear she had actually prepared for our arrival by going out to the cemetery herself, clearing out the area and leaving a marker to help me find the headstone.

“It’s a little hard to read,” she warned me.

I started getting concerned, wondering what I was getting us into with this adventure. My mind conjured up stories of forgotten burial places of centuries gone by, long deserted, all but for thorns and snakes and other vile intruders. I was losing my zest for this project rapidly.

LouAnn assured me it was nothing like I was imagining. Greenbush was just an old cemetery—no office on the grounds—and I simply needed to know where I was going.

The Greenbush Cemetery turned out to be one with quite a history. It was the site of some of Lafayette’s earliest burials. It even boasted a row of burials of Civil War prisoners—thirty three rebels captured from the battle at Fort Donelson who died while in custody in Lafayette. Somehow, my husband’s great-great grandmother was also in there.

It helped to have LouAnn’s marker pointing the way for us at Greenbush. As you can imagine, a simple slim headstone from 1853 would, by now, be looking quite weathered. When I saw how little of it could be read—let alone photographed—I regretted not being prepared to do a rubbing in hopes of eliciting hints about what those indistinct ripples on the stone were trying to tell us. Under the insignia for the church, one or maybe two lines where the name would have been were impossible to read. Under that could be barely made out the lines “wife of John Stevens.” The last three lines were the clearest, but still hard to decipher:
Died
May 3, 1858
Aged 28 yrs.

LouAnn had also helped me by accessing the records for the Greenbush burials. It was she who informed me that Catherine was buried with a James Kelley, aged sixty years, who had died September 1, 1853, and with a Mary Kelley. Unfortunately, Mary’s entry in the records included absolutely no information—no dates, no age, no other explanation.

There was another person buried in that plot, too. A mystery person, her name was given as Mable Stephens. An infant, she was eleven months and twenty one days of age when she died on September 21, 1870. Could she have been a child of John Stevens and his second wife, Eliza?

It’s been years since my afternoon stroll through Greenbush Cemetery, aided by the assistance of that local genealogy volunteer. Despite all those years—and regardless of the hours I’ve put in on researching this family—I really know not much more than I did then about Catherine Kelly Stevens.

It took the promise of a trip to Catherine’s homeland to prompt me to revisit what I could find in the world of online resources that has opened up to us since my visit to the city of Lafayette so long ago. One of the first sites I visited in this last iteration of research forays was to Find A Grave. I was excited and encouraged to see that there was an entry there for Catherine—including a photograph of the headstone—but even more so, to learn that the volunteer who had posted that entry was none other than LouAnn Clugh, the very same person who had guided me to Catherine’s burial site so many years ago.

Thanks to Find A Grave, I was able to get back in touch with LouAnn to thank her for posting Catherine’s information. More than that, Find A Grave provided a clear picture of how dedicated this volunteer has been over the years. LouAnn has been a constant source of genealogical postings on websites and through many restoration projects—a real inspiration through what she has accomplished. 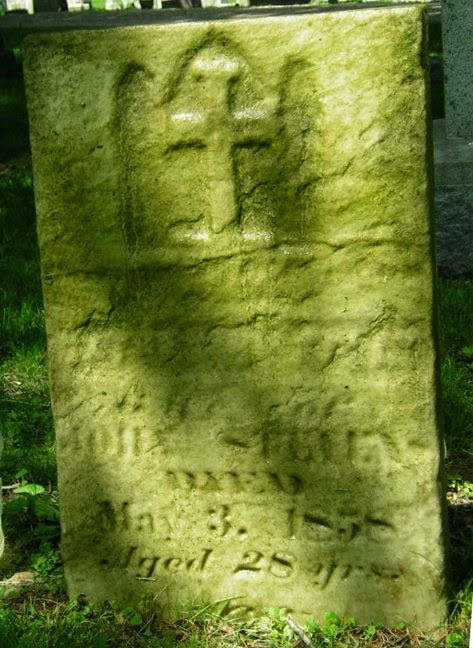 She told me that the photograph of Catherine’s headstone—which came out clearer than I remembered it—was still a challenge to capture digitally. With her permission, I’ve shared the photo as she posted it on Find A Grave, so you can see for yourself. She had properly washed the stone in hopes of seeing the letters pop a bit more—and I think some of them did—but the gap where Catherine’s name should be is still troubling. If it weren’t for having the cemetery records to rely on, there would be no guessing whose stone that represented.

Even so, there are some details that still keep me wonder: is this truly our Catherine Kelly Stevens?

Our Catherine Kelly Stevens’ headstone was found in Greenbush cemetery—maybe. It was in the same family plot as James Kelley (maybe her father?) and Mary Kelley (with no dates or explanation, but possibly her mother). But when I tried to figure out who the third person was—little Mable Stephens—I ran into clues that made me realize there is a very real possibility that, like so many other Irish names, this could simply be the resting place of yet another young mother with the very same name I’ve been seeking.


Photograph above, courtesy of LouAnn Clugh; used with the photographer's permission.
© Copyright 2011 – 2022 by Jacqi Stevens at 2:51:00 AM
Email ThisBlogThis!Share to TwitterShare to FacebookShare to Pinterest
Labels: Cemeteries, Kelly, Lafayette IN, Online Resources, Stevens