There is often a struggle, in family history research, to justify the family legends we’ve grown up with via the records we’ve been trained to locate. Sometimes, the most cherished family lore may find itself debunked by the avid amateur genealogist—to disastrous familial results.

That, however, was not the case in the matter of the mysteriously disappearing Stephen Mulloy. His Tully descendants had carefully preserved his hastily dispatched 1849 letter and passed it down through the generations. Then, too, they had crafted a story regarding his journey, providing a resolution—if not a happy one, at least a later partially verifiable one—to his escapade.

Even then, the nagging doubt passed on from generation to generation had prompted Stephen’s granddaughter, Agnes Tully Stevens—whom he never had the opportunity to meet—to pursue a tangible answer when she wrote her letter to the United States Department of Justice, and then upon their instruction to the National Archives, asking about a way to verify passenger records.

That was in 1969. We’ve come such a long way in document access and retrieval since then. The facts contained in Stephen Mulloy’s original letter happen to provide just what we need to locate the information we are seeking, but in Agnes’ time, those search capabilities just weren’t possible.

Somehow—and here is the family lore passed down from that first generation—Stephen Mulloy had made it to Boston, but by the time his wife arrived there in her attempt to find him, she was told that he had been shot and was dead.

While I can’t totally claim verification for that version of the family story, I can find records pointing to corroboration with that scenario. Passenger records for the very ship Stephen Mulloy said he was sailing on—the Anglo Americano, setting sail sometime after February 20, 1849—confirm the ship’s arrival in Boston harbor on March 27, 1849. And there, on the bottom of one of the pages, was an entry for a Stephen Molloy. No matter how the name was spelled, it belonged to a twenty six year old mason from Ireland, who may very well have been our Stephen.

So Stephen—or at least his ship—made it to Boston. But what happened then? Is it true that he died shortly afterwards?

Conveniently, there is a digitized volume of the Index to Deaths in Massachusetts 1841-1850 that includes an entry for a Stephen Maloy. Apparently, the love of spelling on this side of the pond bore a strong resemblance to that quality from the Old Country. I will defer judgment on this instance until I can access a copy of the death record from volume 50, page 33 for deaths occurring in the city of Boston in 1850. But the circumstances seem to align with what the family insisted all along was the truth of the matter. 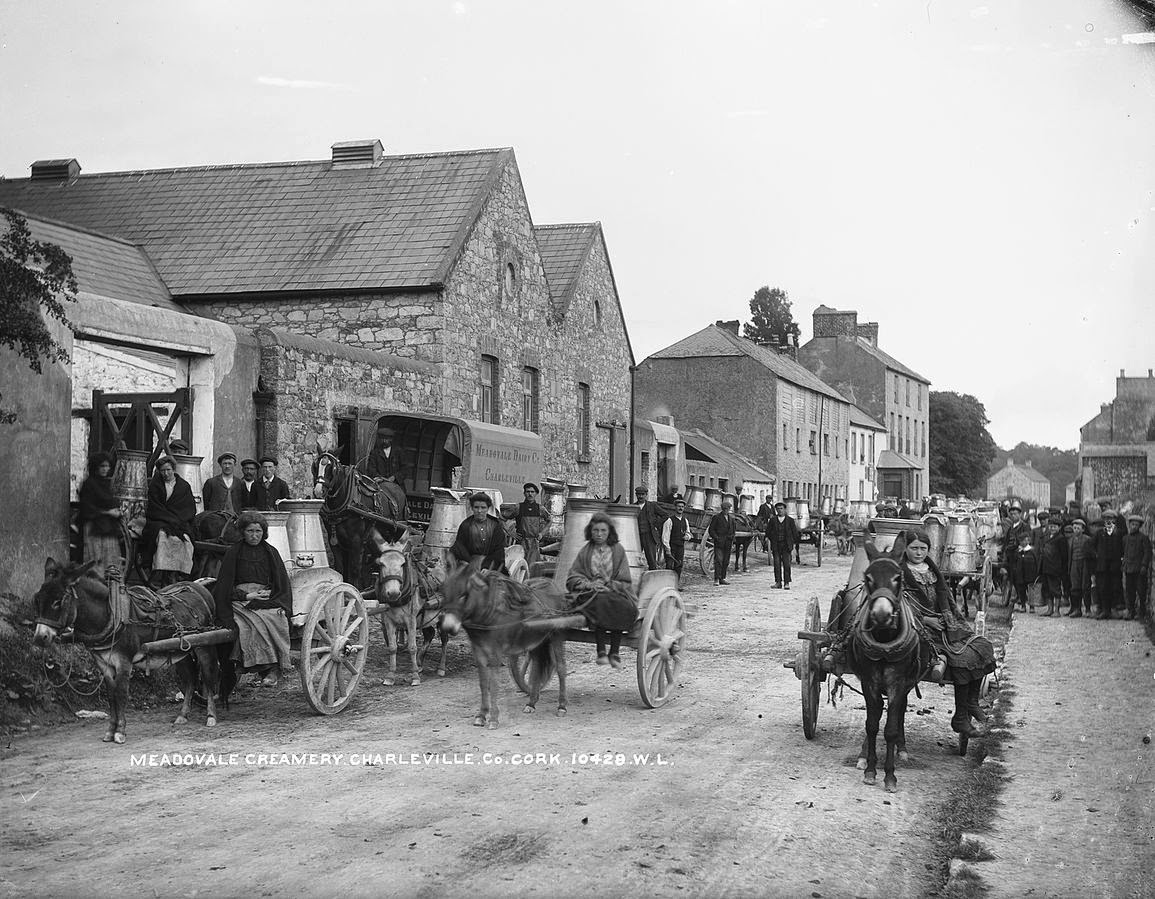 Photograph: the Meadowvale Dairy Company in Charleville, County Cork, Ireland, circa 1909, looking not much different than it had, sixty years earlier, when Stephen Mulloy's letter passed through town on its route to be delivered to his wife; courtesy Wikipedia; in the public domain.
© Copyright 2011 – 2022 by Jacqi Stevens at 2:42:00 AM
Email ThisBlogThis!Share to TwitterShare to FacebookShare to Pinterest
Labels: Family Letters, Immigration, Malloy, On the Move, Passenger Records, Tully