While I am not entirely sure I’ve located the correct information on the Catherine Kelly who married my husband’s great-great grandfather, John Stevens, it has been possible to obtain some evidence about this particular Catherine Kelly. That, however, has only become possible, owing to records regarding her third-born and—ominously—final son, William H. Stevens.

I had already known that Catherine died young—best I can tell, in 1858—and that her untimely death was likely owing to complications following the birth of her third son, William. Perhaps as a result of the circumstances surrounding his arrival, William’s own date of birth had not been captured by any documents—at least not any that I can find.

That introduces a corollary difficulty in extrapolating the date of Catherine’s death, for depending on which document I rely upon to determine her baby’s date of birth, the year of her passing fluctuates somewhat. For instance, the 1900 census gives March, 1860, as the date William was born. The 1910 census advances his age, appropriately, ten years—providing a sense of confidence in this 1860 revelation.

Yet, to confirm this report, I am at a loss to find William in the 1880 census. He is not in his father’s household. The senior John Stevens had remarried soon after the loss of his first wife, and now had three daughters to raise.

Nor was William in his oldest brother’s home in that 1880 census. His brother James had married Ella Nash and was situated comfortably near the household of his in-laws—but with no sign of William anywhere on that census page. Their other brother—John Kelly Stevens, whom we’ve discussed in detail in the past—was also married and living across the state in Fort Wayne, with no sign of his brother William there.

That, incidentally, was the case even for the 1870 census. Though James and John were in the listing for the “Stephens” family’s household, along with their half-sisters—Sarah, Mary and Elizabeth—there was no sign of William. Ditto 1860, though William would have been an infant or very young child at that point—unless he was yet to be born.

On the other hand, a look at William’s June 8, 1939, obituary in the Lafayette, Indiana, Journal Courier, indicated the possibility of a year of birth a little earlier than 1860:

William Stevens, 81, lifelong resident of Tippecanoe County, died at 1 p.m. today at the County Farm where he had lived since 1935. Mr. Stevens had worked for many years as an employee of the Lafayette Street Railway Company. Surviving are the wife, and four children: Elmer, New York; Miss Ruth Stevens, New York; Mrs. Jesse Wood, Shoals; and Mrs. Delmar Bellinger, Ft. Huron, Michigan.

The implied year of birth as 1858, gained from this obituary detail, would conveniently match the supposed year of death of his mother, Catherine Kelly Stevens. But, given the absence of this child from his father’s census records, could it be possible that William wasn’t really Catherine’s son, and that she had died from other causes?

While indexed material is not as reliable as the documentation from which it is drawn, we do have three reports linking William to Catherine—but only vaguely.

One, a marriage index labeled Indiana Select Marriages, 1780-1992, provides the basic information on the June 29, 1892, marriage of William H. Stevens to Alice Munger in Tippecanoe County. Remember that bride’s name, Alice Munger, as we move through the various available indices to explore the evolution of transcription reporting.

The next entry I found was also extracted from the source cited above. A separate entry under the name “Wm. H. Stevens,” it included that same birth year of 1860, as well as the names of William’s father and mother. Seeing John Stevens given for the father’s name is predicable. The mother’s surname, however, was supplied as Riley—a discrepancy over which I’m not too concerned, seeing her first name was listed as “Catherne.” Perhaps that “R” was actually a “K” and the “i” really an “e.” I don’t get too concerned over this when I look ahead and realize that even the bride’s name wasn’t immune from clerical errors: Alice’s maiden name was provided as a choice between “Myer” or “Muryer.” Not at all the surname Munger which it was supposed to be. Perhaps the handwriting was so abysmal as to stump the transcriber.

Another source, Indiana Marriage Collection, 1800-1941, provided “about 1860” as the estimate for William’s birth year, and transcribed his mother’s name as Catherine “Rilly”—a version from which the name “Kelly” could easily be extrapolated. In this case, again, William’s father’s name was cited as John.

Could the Catherine in the various transcriptions of William’s marriage record actually have represented a mis-read entry of the surname Kelly? With each of these instances being index formats only, with no provision allowing a glimpse at the handwriting in the original document, it is hard to tell. It seems reasonable to conclude that it was.

The question remains, though, about William: was he really the son of our John and Catherine Kelly Stevens? Why was he never in his father John’s household in any census records? 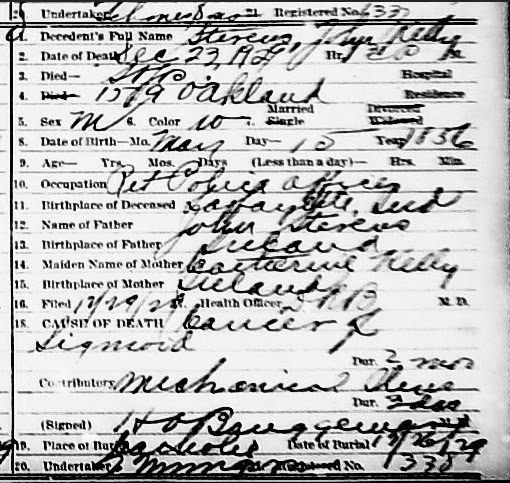 With that, we’ll take a look at what can be found in Lafayette cemeteries for a Catherine Kelly Stevens who died there on or before 1860.
© Copyright 2011 – 2022 by Jacqi Stevens at 2:41:00 AM
Email ThisBlogThis!Share to TwitterShare to FacebookShare to Pinterest
Labels: Documentation, Kelly, Lafayette IN, Stevens