If the two young children of the deceased Charles McClellan were living in the home of someone named Margaret Stephens, could there be a connection, despite the different surname? After all, by the time we found Charles' orphans Adeline and Samuel in the 1850 census, they had certainly attained majority age and were free to live elsewhere. Why did they stay?

More to the point, who was Margaret Stephens? We can see from that same 1850 census that Margaret also had three young people with the same surname living in her household: twenty year old Mahalia Stephens, fourteen year old James C. Stephens, and fifteen year old Elizabeth H. Stephens. While each of the three younger Stephens residents were born in Florida—a logical expectation, given they were living in Jefferson County, Florida—the census revealed that Margaret herself was born in South Carolina.

Also of help to us in our broader search for the roots of the McClellan children's deceased father Charles is the notation that both Adeline and Samuel were born in Georgia. Since Jefferson County shares a border with the state of Georgia, that is not surprising news. However, that detail will help guide us as we trace the orphans' father's roots before his family settled in territorial Florida.

If Adeline and Samuel were born in Georgia, that most likely meant that their father was once also in Georgia. But what about Margaret? Could she have been connected to this family as well?

As it turns out, there was an application filed by someone named Margaret E. Stephens for a widow's pension, based on the service of her husband in the war of 1812. While not much information was written on the document other than the veteran's name—Benjamin Stephens—four captains' names from the Georgia militia were provided, under the line for "service." That line, incidentally, was edited to add the word, "alleged."

Still, that's a clue: to look for a marriage record for Benjamin Stephens and a bride named Margaret, somewhere in the state of Georgia.

With the help of digitized and searchable records, that was easily found: 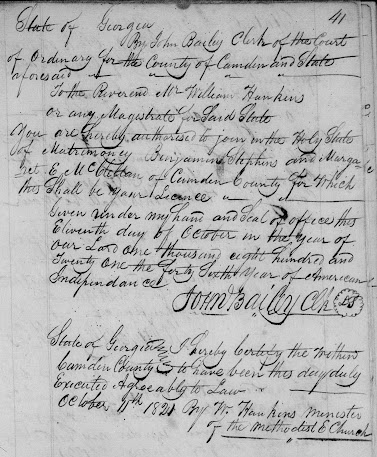 On October 11, 1821, in Camden County, Georgia, the Reverend Mr. William Hawkins of the Methodist Episcopal church performed the ceremony uniting Benjamin Stephens and Margaret E. McClellan as husband and wife. By the 1830 census, though, Benjamin Stephens and his young family had moved across the state line to Jefferson County in territorial Florida, and by 1835, Benjamin was involved in land transactions in the same county, according to the Bureau of Land Management.

What became of Benjamin, Margaret McClellan's husband, is not yet clear, though it is obvious that by 1850, his wife and children were on their own. As for Margaret, though we've yet to find any record identifying her specifically as daughter of Charles McClellan, we at least can feel fairly confident that, as the surrogate mother for Charles' youngest children Samuel and Adeline, Margaret was likely their older sister.

What is most helpful about this discovery is that it outlines for us the route that brought Charles McClellan to Jefferson County in those early days before Florida statehood. Let's step first across the state line to Georgia to see what can be found in Camden County, the place where Margaret married Benjamin back in 1821.

Above image of the October 1821 marriage license for Benjamin Stephens and Margaret E. McClellan of Camden County, Georgia, courtesy of FamilySearch.org.