About the Other Andrew

Researching the wanderings of my fourth great-grandfather, Charles McClellan, has brought us backwards in time from Jefferson County in territorial Florida to Camden County in Georgia. Though several McClellan descendants have asserted that the step before that move to Georgia was through Barnwell District in South Carolina, the only indication I found was in a close alternate location: Orangeburg District.

The question uppermost in my mind, once I found those details on Charles McClellan, was whether this Charles in Orangeburg District was the same man as the one by that name—well, close, if you can excuse the surname discrepancy as sloppy record keeping—that we found in 1820 in Georgia.

There was, however, one tantalizing detail about each appearance of Charles McClellan's name: nearby was the name of another McClellan man—the same one in each case. That man was Andrew McClellan.

Judging by the age brackets showing in the 1800 census, this man was fairly young: somewhere between sixteen and twenty five years of age. He was living in a household containing only one other resident, a woman between the ages of twenty six and forty four, an enigmatic bracket indeed for guessing whether this was the young man's mother (perhaps twenty years or more older than he was), or simply a wife barely a year older.

The story could be rounded out a bit more clearly, if we fast forward to the 1820 census in Georgia, where our Charles was listed next to what seems to be this same man—in another county and state. This time, the other McClellan was in the age bracket including that twenty six to forty four age span. He was joined, once again, by a woman in that same wide age bracket, but the addition of two girls suggests that the older woman would more likely be his wife, rather than his mother.

This other McClellan's name was Andrew, a name I have watched with quite some curiosity, wondering whether he might be brother to our Charles. While documentation from that era and location would not provide an answer to such a question, it is still obvious that tracing Andrew McClellan's life story might prove productive, so we'll take some time to follow his records.

In the meantime, though, it occurred to me that there might be one other way to see whether my guess about the McClellan men's relationship might be correct: look at my DNA matches. 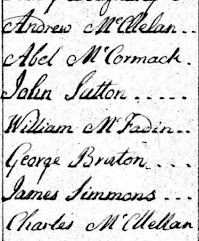 Above: Listing of McClellan names from Orangeburg District in South Carolina according to the 1800 U. S. Census; image courtesy Ancestry.com.

© Copyright 2011 – 2022 by Jacqi Stevens at 2:49:00 AM
Email ThisBlogThis!Share to TwitterShare to FacebookShare to Pinterest
Labels: McClellan, South Carolina